Beverage industry legend Norman Bonchick, Chairman and CEO of 375 Park Avenue Spirits is retiring August 1 from active management of the company, it was announced today, although he will continue working with the privately-owned import firm in a limited capacity as a consultant.

Current President and COO Jason Schladenhauffen has been named to assume Bonchick’s duties as CEO.

“Norman’s influence on the industry throughout his storied career is unparalleled. The relationships he’s built as a result of his people first approach will leave a legacy well beyond his years,” commented Schladenhauffen. “His steady hand has ably guided this company for almost 15 years and I look forward to building on those many successes in the years ahead.”

Bonchick’s career in the industry spans nearly 50 years. He got his start in 1971 at Joseph E. Seagram, where he served as the Assistant Division Manager before becoming the President of South Shore Liquors in Chicago. In 1986, Bonchick relocated to Florida where he joined National Distributing Company of South Florida and was later named Managing Director, a role he held for seven years. 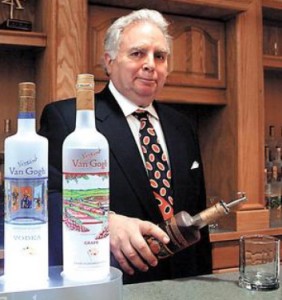 In 2004, Bonchick made a major career change by joining a small importer, Van Gogh Imports, as National Sales Manager then President. At the time, the company was dedicated to a single brand, Van Gogh Vodka. In 2008, Bonchick assumed the duties of Chairman and CEO. Under his leadership the company steadily expanded by diversifying the portfolio and adding personnel.

In 2015, Bonchick brokered a deal in which Van Gogh Imports changed its company name to 375 Park Avenue Spirits, becoming an independent, yet fully integrated sales company within the Sazerac Company.

reach in a competitive market, thus meeting Bonchick’s goal of ensuring 375 Park Avenue Spirits would be large enough to guarantee its longevity after his retirement.

About the same time, Bonchick decided it was time to re-launch and refresh the Van Gogh Vodka brand in 2016. As part of the rebirth, Bonchick introduced a new visual identity designed to contemporize the brand and capture new consumers, while taking measures to ensure the trade dress reflected the quality of liquid on the inside.

Bonchick says he is most proud of “putting together a team of highly skilled and motivated people that has allowed the company to flourish. I didn’t want to just build a company,” he says, “I wanted to build a family, and one of the things I most look forward to in my retirement is keeping in touch with all the great people I’ve met along this journey.”

In addition to the Van Gogh Vodka brand, 375 Park Avenue Spirits also represents a large variety of other imported spirits.