The low-cost travel model is continuing to grow in strength globally– delivering higher growth than Regular Legacy operators in all regions except Europe. In Europe, LCC’s and Regular Legacy operators are on parity, increasing their PAX handling capacity by 5% annual change in the latest 12 months, according to Lawrence Scott, Industry Advisor – Travel Retail and Duty Free for NPD Travel Retail (formerly Counter Intelligence Retail).

This trend is reflected in each of the sub-regions of the Americas to a much greater degree, Scott reports. Passenger departures from the Caribbean – being handled by an LCC operator – grew +17.2% YoY while Regular Legacy flights struggled to post positive growth (at 0.1%); Northern America, 62.3% of the total Americas PAX, grew at a similar rate with 27.85 million PAX flying LCC, +11.7% versus the previous 12 months. For comparison, traffic on Regular Legacy airlines grew +3.0%.

“We are seeing this incremental passenger demand being handled by a few standout performers within the airline operators. Low cost airlines departing the Caribbean of note, are Jet Blue Airways – the largest operator in the region regardless of airline classification, and Spirit Airlines – handling 0.63 million PAX – has grown a staggering +81.4% YoY,” said Scott.

“In Central America, the performance of low-cost airlines is more concentrated to the mid-ranks but Interjet has grown +24.8% YoY and Spirit Airlines grew by +27.2%. In North America the story is very similar to the Caribbean, with Jet Blue, growing +21.3%, and Spirit Airlines, up +55.8%, the key performers,” he added.

“Using NPD Travel Retail ‘Traveller Statistics’ data – including our forecasting module – we project that the importance of the low-cost environment is only likely to increase. Within the Americas it is projected that by 2025, 38.5% of all international traffic will be fulfilled by an LCC operator. This is a staggering 20% more than the current passenger share delivered in 2018,” said Scott. 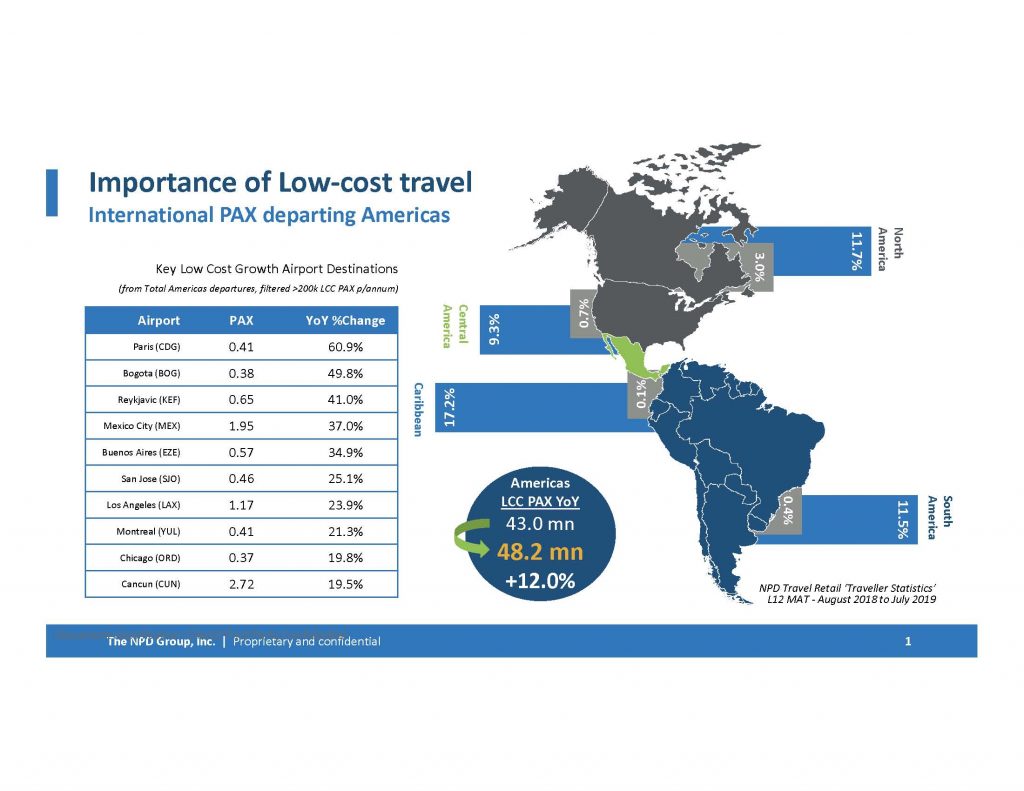