OAG has released its annual Busiest Airline Routes Report for 2022, which tracks data for the twelve months between October 2021 and September 2022.

Underscoring the continuing recovery in air traffic, the latest report shows the dominance of Middle East airports, which hold four of the Top 10 spots in international routes, with a further three starting or ending in the Middle East. In fact, the busiest international route is between Cairo and Jeddah (CAIJED), which has 35 daily flights and 3.2 million scheduled seats in the last 12 months.

Only two of the Top 10 routes are in the Americas: #3 New York JFK to London Heathrow, and #7 Orlando International to San Juan Luis Munoz Marin International Airport.

India is also seeing an increase in route capacity with two routes in the Top 10, operating from Mumbai to Dubai (BOM-DXB) and Delhi to Dubai (DEL-DXB).

The busiest international route in 2019, pre-Covid, was between Kuala Lumpur and Singapore Changi (KUL-SIN). This is the only intra-Asian route to appear in the 2022 Top 10 at position five.

In 2019, carriers operated 82 daily flights between the two cities. In the last 12 months this has averaged just 33 flights per day, reports OAG. 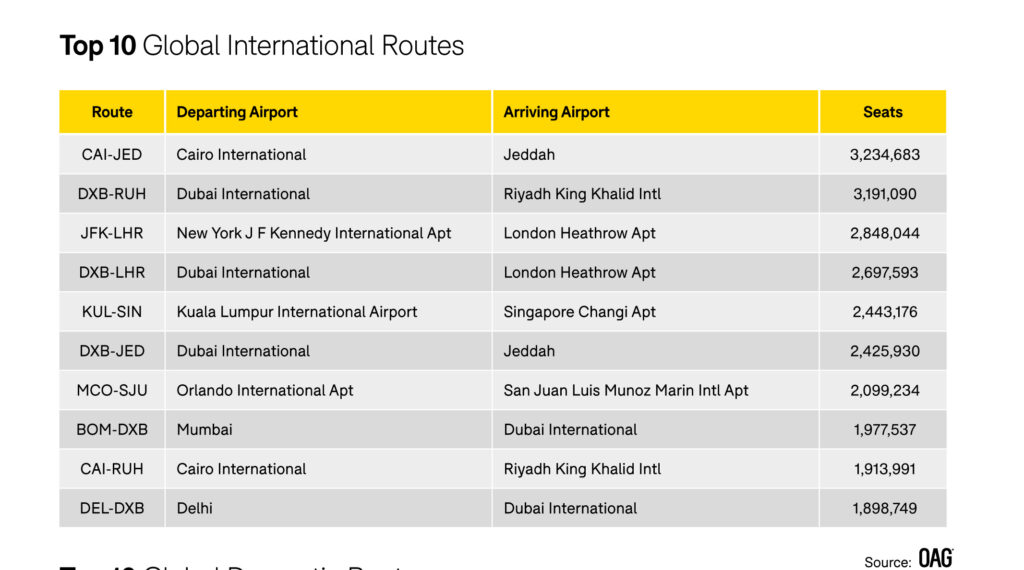 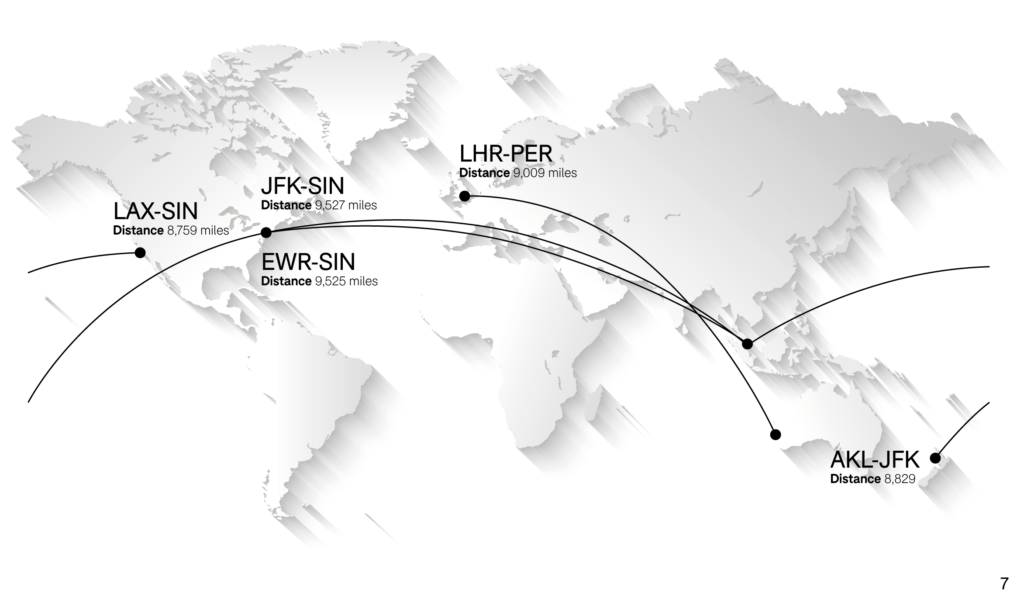 Due to ongoing travel restrictions, only one Chinese domestic route made the Top 10 this year, Beijing Capital International – Shanghai Hongqiao International (PEK-SHA), reaching #10.

The one domestic route operating outside Asia Pacific is Jeddah – Riyadh (JED-RUH) in Saudi Arabia, where carriers operate nearly 100 flights per day between the two cities.

Longest routes
U.S. airports had a much stronger showing when it comes to longest routes—showing up in eight out of the Top 10. The longest airline route currently in operation is between New York and Singapore (JFK-SIN) at 9,527 miles, a flight that takes about 18 hours, 40 minutes. It beats the Singapore-Newark (EQR-SIN) route by just 2 miles, says OAG.
London Heathrow-Perth is #3; JFK-Auckland #4; LAX – Singapore #5; Dallas-Fort Worth –Sydney #6; JFK- Manila #7; San Francisco- Singapore #8; Atlanta Hartsfield-Jackson – Johannesburg #9; and Dubai – LAX #10. 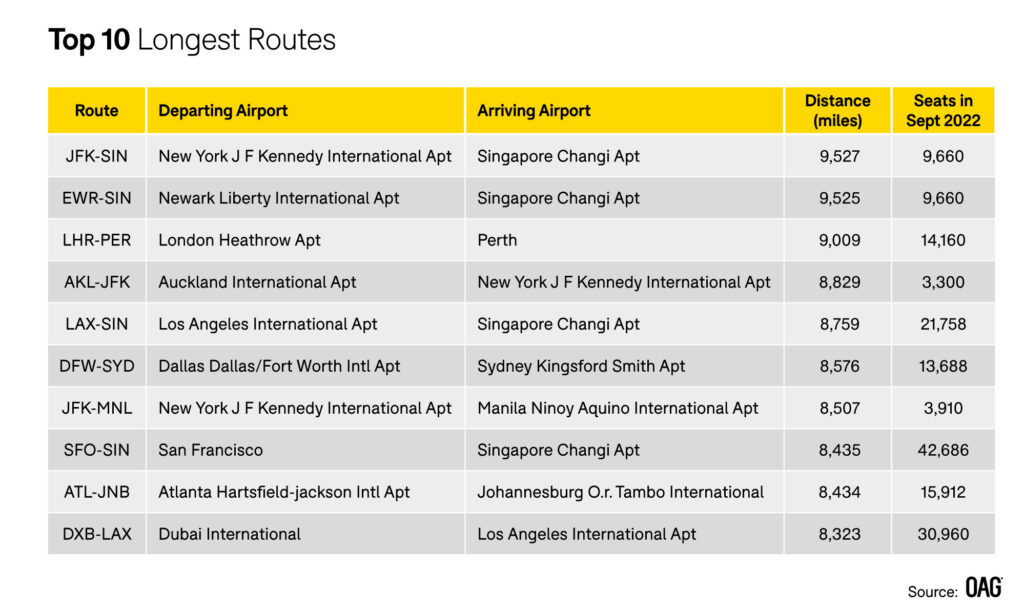 Unserved routes
North American destinations also held the dubious record for the most unserved routes (with the largest volumes of people traveling indirectly between two points), with eight of the Top 10 spots, between August 2021-July 2022.
New York featured in three of the underserved routes: Quito-JFK was the largest market (90,693 passengers), with more than enough passengers to potentially sustain a direct service, says OAG.
JFK-Mumbai, India’s largest city, came in at #7, with nearly 82,000 passengers; and NewarkGuayaquil, with nearly 74,000 passengers traveling indirectly in a 12-month period, was #10.
Other underserved U.S. destinations include LAX – Ho Chi Minh City (#2) also with more than 90,000 passengers flying indirectly; LAX – Yerevan (Armenia), LAX – Athens; and Rome – San Francisco.
Other underserved routes of interest include: London – Kathmandu, with nearly 90,000 people currently traveling between the UK and Nepal capital; Toronto – Tehran with 82,000 passengers, and Taipei – Jeju, the shortest route, where 83,000 people traveled indirectly in the last 12- months.
For more information, go to www.oag.com.