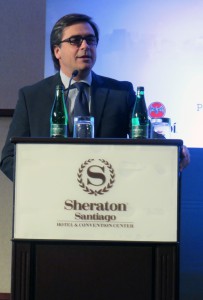 The business on the Uruguay border is showing encouraging signs of recovery after taking a deep nosedive over the last year.

“The industry on the border in Uruguay closed the year minus 50%, and we (Neutral) closed minus 44%. We started 2016 minus 40%,” confirms Enrique Urioste, CEO of Uruguay border store chain Neutral Duty Free in an interview in early October.  “The numbers were particularly bad because January and February of 2015 were pre-crisis months, so that pushed the beginning of the year numbers down even further in comparison.

Secondly, the region is now in the 9th month of relatively stable currency, staying in the range of 3.20 / 3.30 for the Real against the US$.

And third, imported goods into Brazil started to get more expensive.

“The combination of the three factors; optimism, currency exchange at the fixed level and more expensive imported goods coming into Brazil created a recovery pattern that stimulated a demand for our goods,” he said.

Urioste says that his optimism is shared by some high ranking business officials. An executive of a key bank in Brazil told Urioste that his bank is forecasting growth in the Brazilian economy between  1.5% and  2% for 2017—a relatively optimistic assessment after the dismal numbers of the recent past. The bank is also forecasting a reduction in the inflation rate from  7.1 % to 5% and recovery in unemployment. For Argentina, the bank sees the economy growing in the range of 3-3.5%, further strengthened by lower inflation.

In addition, Urioste points out that both countries are enjoying new foreign investment, although not as strong as hoped for.

This recovery entails some significant changes from past cycles, he explained.

One theory is that the corruption scandals in Brazil have produced the most important change in the two centuries that the country has existed.

“This change is bigger than when the country changed from a military dictatorship to a democracy. At that time the economy was still tied to the political sector. This is a key cultural change,” he adds.

Although the current recovery is taking place more gradually than recoveries in the past, Urioste is optimistic that the new administration in Brazil will be able to accomplish a number of difficult goals, especially since the new president, Michel Temer, will not stand for re-election.

“President Temer knows he will not be a popular president because of the way he came to office [Ed. Note: In August, President Dilma Rousseff was replaced by her former vice president and coalition partner, Michel Temer, who had been running Brazil as interim president since Dilma was suspended to face the impeachment trial in May] and the measures that he has to enact. But we are convinced that Temer will introduce changes that will improve the Brazilian economy. We believe he will place a cap on the expansion of the federal government so it is linked to economic performance, as well as modify the pension system. Both of these will help Brazil’s economy improve,” he tells TMI.

Meanwhile, the economy in Argentina is improving, but is still difficult in the short term.

Uruguay, on the other hand, a market that reacts to its neighbors, has built one of the world’s largest cellulose plants – which is the largest capital investment in the country’s history. This semester alone the project poured $1.3 billion into the country and helped compensate for the slowdown of Uruguay’s neighbors.

Urioste says that he is already seeing improvement at his stores, and more Argentineans shopping than in the past.

“For the total company, we closed the month of October +69%,” he said. While the flagship store in Melancia Mall in Rivera sees more Argentine shoppers seasonally during the summer and winter holidays, Urioste says that some of the stores – such as those in Chuy and Bella Union –are seeing a big increase in Argentinean shoppers.

“Argentineans now make up 50% of the customer base in Bella Union,” he noted.

The big news in the Neutral store in Melancia was the opening of a 100 sqm shop-in-shop for Victoria’s Secret. “This is the first Victoria’s Secret store in Uruguay and the only one on the border. We are heavily promoting it in all the Brazilian newspapers,” he said.

Urioste is also growing Neutral’s border business by entering into agreements with travel agencies to bring shoppers to its stores:

“We are now averaging 100 buses a month in our different locations, and this is only getting better.”

Neutral is also expanding its onboard ferry business, Colonia Express, which operates between Buenos Aires and Colonia, Uruguay.