Trudeau, the second youngest prime minister in Canadian history and the son of the late Pierre Trudeau, who served as prime minister from 1968 – 1979, and again from 1980 – 1984, is a Liberal who won a landslide victory after nearly a decade of Conservative rule. He promises big changes and has already made his mark by naming a new Cabinet made up equally of 15 men and 15 women.

“Prime Minister Justin Trudeau is pro small business so that should help the land border duty free business,” explained FDFA Executive Director Laurie Karson during the Convention, which took place Nov. 15-19. “In addition, Trudeau has made the Minister for Small Business and Tourism, who previously reported into a higher level cabinet position, a full-fledged minister for the first time. So now our Minister has a set budget, and does not have to get approvals from other departments in order to do something. The new ministry will have much more direct decision-making powers.”

Conversely, the FDFA had worked very closely with many in the former Conservative government.

“Conservative members of Congress represented about 80% of the locations where our member stores are located, so we had really been supporting conservative members of government, both locally and in specially targeted government relations. We had to deal with a lot of bureaucracy and many layers of government. The new government claims to be different, promising to be completely transparent, and much more equitable,” she explained.

But the reality is that the Association will almost be starting its government relations activities from scratch, says Karson.

“We now have 200 new ministers that we need to educate about travel retail. We are working with Temple Scott and Associates, a lobbying organization with strong liberal connections. The challenge right now is that the administration still has to make a motion to commence government at this point. They are identifying all the chiefs of staff, and the strong decision-making bureaucrats that we have to make our arguments to alongside the members of parliament.”

Karson continues: “Our number one priority, because this is a government that we haven’t dealt with in the past, or certainly in a very long time, is to educate the new administration about who we are, and remind them how important to the overall economy our industry is. We have to let them know what they need to do to make us more effective.”

Karson says that the FDFA is looking to bring its government relations team and board members to Canada’s capital city of Ottawa to begin lobbying activities as early as January.

“Education is key. I am hoping we can meet with some of the members of Parliament, and maybe have a dinner with key decision-makers. Our ROAD Trip program* gives us a specific issue to call them about. We are working with the National Chambers of Commerce, and that will open a lot of doors for us. During its AGM in October, the C of C presented the Government of Canada with recommended programs they want to see in the budget, and ROAD Trip was one of the recommendations. Many of the border communities favor ROAD Trip as a way to bring in Americans as tourists, now more than ever. Of 57 resolutions put forward, only two were unanimously voted through, and ROAD Trip was one of the two. So the C of C is submitting ROAD Trip as a budget choice under the taxation section. This is one way to better engage our representatives.”

Even though the date of the 2016 budget submission has not yet been announced, Karson says that the Association must be ready to “hit the ground running,” to work to have ROAD Trip approved for funding in the coming year. 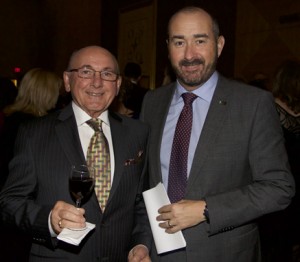 In related news, Michael Resch of DFS Ventures (Emerson Duty Free Shop in Manitoba) will be inducted into the Tourism Hall of Fame by the Travel Industry Association of Canada (TIAC) at an award luncheon on Dec. 4. He will receive the award from the new Minister of Small Business and Tourism in front of 350 of the top tourism stakeholders.

“Michael will have a chance to discuss all sorts of issues with the new minister — a brilliant young lady named Bardish Chagger –and provide great public relations for our industry. This will be a great introduction for her to duty free. By the way, Michael so deserves this award. I don’t know anyone who has accomplished more,” says Karson.

* Road TRIP (Travel Rebate Incentive Program) is a three-year pilot pro-gram developed by the FDFA to help incentivize U.S. tourism visits and related spending in Canada by allowing U.S. travelers to have their 5% tax rebates processed on the spot at Canadian land border duty free stores. As part of the program, travelers would have been encouraged to “Take 5” and consider making a final purchase with their rebate before returning to the U.S.

Exchange rate favors Canada
The current Canadian exchange rate, which has averaged about C$1.33 to the US dollar over the past several months, is seen as a strong boon for American tourism to Canada, says Karson.

“For two months in the summer, July and August, the land border duty free shops reported sales up by +17% and+23%, respectively, month over month. The exchange rate is not going to change anytime soon, and especially if we get ROAD Trip passed, we anticipate stronger sales growth with more U.S. customer traffic. I hope we will see the Americans back and spending money,” said Karson.

CBSA
In other FDFA business for 2016, the Association will be working on some projects with Canada Border Services Agency (CBSA). Director General Brent McRoberts and Shawn Riel, Man-ager of Assessment and Licensing, who have oversight of Canada’s land border duty free industry, presented an overview of the industry at the FDFA Operator’s Meeting. FDFA recently conducted a survey asking its operator members to identify administrative areas they would like to see amended to improve business and store efficiencies.

“Our members would like to see more automation and modernization of the administration. Brent and Shawn are very forward thinking government officials with a keen knowledge of our industry. As a result, we are very pleased to announce that FDFA is forming a collaborative working group in in 2016 to develop mutual recommendations to improve our industry for the future,” said Karson.

New Offices/Professional Summit
FDFA is also moving to more spacious, efficient offices in Dec-ember, although it is staying in the same building on Lisgar Street in Ottawa. The Association has been renting space from TIAC, the Tourism Industry Association of Canada, since they share so many tourism issues in common. FDFA will continue to share information and activities with TIAC, says Karson.

“The Summit will be attached to the end of the AFC Show (Jewelry/ Gift) which a lot of the operators attend. We will hold a team buil-ding event and a day of meetings. We haven’t established the agenda yet, but we expect to hold an open dialog on core issues like liquor, tobacco, cosmetics, and ROAD Trip. We will have more details closer to the event,” says Karson.

Employee certification program
The FDFA is now finalizing the pilot program it developed in partnership with the Retail Council of Canada. The pilot program served 37 employees from 11 stores, and several employees have already signed up for the full program.

“The employees go online, study the online modules, and then take the exam. We are using feed-back from the pilot to fine tune the program before we go live. I would recommend it to every new hire. Our industry is complicated- Canadian Customs, U.S. Customs, border information, general product information, this covers a lot of that. It is a good user-friendly tool, and especially valuable since some of our stores don’t have formal trainings,” says Karson.

The idea of the certification program is to add a new module every year, creating a library of training modules. For 2016, the new module may focus on liquor, says Karson.

“We are there to increase sales and this training will do that. Having knowledge will make an employee more confident. There are no negatives to training an employee,” she noted.

In closing, Karson gave special thanks to Allison Boucher, and the whole team, who did an excellent job of organizing the FDFA Vancouver Convention.