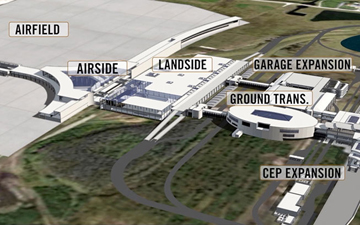 The Greater Orlando Aviation Authority unanimously voted to approve the new South Terminal at Orlando International Airport (MCO). The seven-member board that manages the airport approved the $1.8 billion complex expansion spending plan at its meeting on March 16, it said.

The first phase of the construction project could begin as early as 2017 and will include an airfield, landside and airside buildings, a six-story parking garage, ground transportation and utility works. This part of the project is expected to be operational by 2019.

The entire expansion, which would add 120 new gates at MCO, is expected to take about 25 years.

The south terminal complex and associated apron/taxiway will encompass approximately 300 acres. The airside terminal, which will have between 16 and 24 gates, will be able to accommodate both international and domestic flights.

A record 38.8 million passengers passed through MCO in the 2015 calendar year, according to GOAA. It’s the second busiest airport in Florida and the 14th busiest in the country.