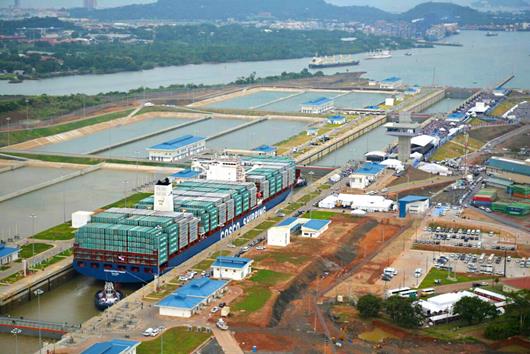 Panama opened the long-delayed US$5.4 billion expansion of its shipping canal on Sunday,inaugurating the interoceanic waterway and ushering in a new era in global trade.

The Chinese container ship “Cosco Shipping Panama” entered the Agua Clara lock on the Atlantic side at 7:50 a.m. to begin the first crossing of the 50-mile-long waterway. It was due to emerge on the Pacific side by 5:00 p.m.

The expansion, which triples the size of ships that can travel the canal, allows the passage of a new generation of super cargo ships, and caps a nine-year, $5.4 billion expansion project that will double shipping capacity and impact global trade routes.

With the new expansion, Panama can host 98% of the world’s shipping, and compete against the Suez Canal and U.S. land routes made cheaper by low oil prices.

According to the Canal Authority website, the Expansion Program is the Canal’s largest enhancement project. It included the construction of a new set of locks on the Atlantic and Pacific side of the waterway and the excavation of more than 150 million cubic meters of material, creating a second lane of traffic and doubling the cargo capacity of the waterway. While the Expanded locks are 70 feet wider and 18 feet deeper than those in the original Canal, they use less water due to water-savings basins that recycle 60 percent of the water used per transit.

The latest generation of gigantic carriers — more than 46 meters wide and 275 meters long — could not fit through the original 102-year-old canal. Unable to reach the U.S. East Coast by sea, many of the mega-carriers from Asia unloaded their goods in the ports of Los Angeles and Long Beach for shipment by rail to the rest of the country and beyond.

The revitalized canal has also spurred major construction projects at ports on the U.S. East Coast and Gulf of Mexico. The ports of Miami, New York and Houston have deepened their harbors, expanded rail access and installed gigantic cranes to service the massive ships.

By 2021, the Panama Canal Authority (ACP) is hoping the project will bring in US$2.1 billion per year in added revenue, representing 2.8% of GDP. According to Mercopress, 170 ships have already signed up to use the canal in the next three months.

Mercopress also reports that the ACP already has a US$17 billion plan for a fourth set of locks to lure even bigger ships that can now only travel through the Suez Canal.