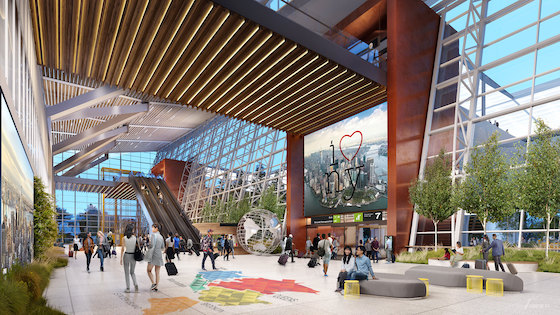 The Port Authority of New York and New Jersey (PANYNJ) closes out this year with the announcement of revisions to the agreement to construct a massive new Terminal One at John F. Kennedy International Airport. A $9.5 billion project, the 2.4 million square foot  state-of-the-art new international terminal will anchor the south side of JFK.

The Terminal will be built in phases, becoming the fourth major terminal project announced by the Port Authority as part of a complete transformation of JFK.

The announcement was made on Monday by New York Governor Kathy Hochul, who said that PANYNJ had reached a revised agreement with The New Terminal  One (NTO) – a consortium of financial sponsors building the new terminal.

The project was initially scheduled to break ground in 2020. Due to the severe impact of COVID-19 on air travel, the terms of the agreement needed to be restructured. 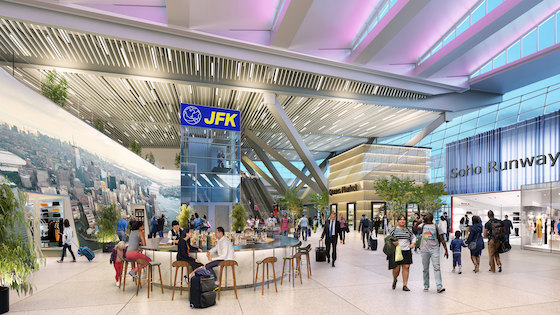 A key element of the restructured agreement is an extended lease term to 2060 to provide sufficient time after the terminal opens to enable the private investors recover their multi-billion-dollar investments. The City of New York’s ten-year emergency extension of the master lease for JFK Airport, which had been set to expire in 2050, enabled this important element of the restructured deal with NTO, said the statement.

The new terminal will be built in phases, subject to international passenger traffic levels, with full completion anticipated in approximately 2030.

When completed, The New Terminal One will be the largest international terminal at JFK and aspires to be among the top-rated airport terminals in the world.

“As we recover from this pandemic, I want to ensure that everyone traveling to New York has a welcoming and streamlined experience, and that New Yorkers have the modernized transportation hubs they deserve,” said Governor Hochul. “The time to get large infrastructure projects done is now, and I’m committed to getting JFK’s brand new Terminal One underway and completed as soon as possible.”

The Port Authority Board of Commissioners voted on the proposed lease agreement at its meeting on Thursday. The full cost of the terminal will be privately financed by the NTO consortium, which includes financial partners Carlyle, JLC Infrastructure, and Ullico. A joint venture of Munich Airport International and CAG Holdings is the operating and technical services partner to the consortium. 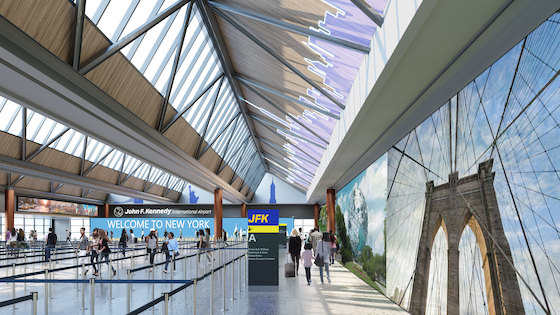 As part of the project, the Port Authority will undertake a number of infrastructure upgrades and improvements, including roads, parking, and utilities including a new electrical substation.

The New Terminal One will be built on the sites of the current undersized and outdated Terminal 1, the aging and obsolete 59-year-old Terminal 2, and the site of the former Terminal 3, which was demolished in 2013.

Construction of the new terminal is scheduled to begin in mid-2022 and the first phase, including the new arrivals and departures hall and first set of new gates, is expected to open in 2026.

The New Terminal One will ultimately have 23 new gates, as well as bright and airy check-in halls and arrival spaces designed to enhance the customer experience and compete with some of the highest-rated airport terminals in the world.

Customers will enjoy world-class, New York-inspired dining and retail amenities, as well as space for lounges, an indoor green space and family-friendly amenities.

The New Terminal One will incorporate the latest advances in both sustainability and security and be infused with a uniquely New York sense of place.

In October 2018, following a competitive review of leasing proposals, the Port Authority entered into exclusive negotiations for the development of two major new internationals.

The new terminals, one on airport’s north side and one on the south side, would lead the transformation of JFK and increase the airport’s capacity to accommodate projected growth.

This week’s announcement reflects a significant vote of confidence by the private sector in the future of JFK Airport, the return of air travel, and the economic recovery of the region, said PANYNJ.

This week, the Port Authority Board also voted on the authorization of the full $2.9 billion of funds which were included in the Port Authority’s 2017-2026 Capital Plan for the JFK Redevelopment program. These funds are allocated to enabling infrastructure in direct support of JFK Redevelopment, including roadway improvements, utilities, improved parking facilities, a ground transportation center and airfield work. (To date, approximately $1.24 billion of those funds have been authorized through separate Board actions.)

The development of The New Terminal One is expected to result in over 10,000 total jobs including more than 6,000 union construction jobs.

NTO is a private consortium comprised of Carlyle, JLC Infrastructure (formed in 2015 by Loop Capital and Magic Johnson Enterprises), and Ullico (the only labor-owned insurance and investment company), and is supported by Reach Airports, a joint venture between Munich Airport International and Carlyle’s airport platform, CAG Holdings, providing technical services. NTO selected a design build team, led by AECOM Tishman, and Gensler, a design and architecture firm.

The passenger facilities at The New Terminal One will feature significantly larger check-in, security and concessions areas with high ceilings, natural light and modern architecture coupled with interior green space, exhibits and art featuring iconic New York landmarks and local artists. World-class retail, restaurants and bars will include locally inspired restaurateurs, craft beverage options and Taste NY stores. Free, high-speed Wi-Fi and an abundance of charging stations throughout the terminal will enable passengers to stay connected at each step of their journey.

Sustainability enhancements will include the use of renewable energy technologies such as a solar hot water, aircraft de-icing and fluid recovery, and the conversion of diesel ground service equipment to electric-powered ground service fleet across the airport – such as baggage tractors and belt loaders.

Plans for The New Terminal One will build on the momentum of the other three major components of the airport’s transformation.

The $3.9 billion development of a state-of-the-art new Terminal 6, to be built by JFK Millennium Partners, on the airport’s north side that will seamlessly connect with JetBlue’s existing Terminal 5 was approved by the Port Authority Board of Commissioners in August. The $1.5 billion expansion of Terminal 4, led by Delta and JFK International Air Terminal, was approved in the spring and will begin construction in the immediate future.

Work also began in December 2019 on the $425 million expansion of JFK’s Terminal 8, led by American Airlines, which operates the terminal, and British Airways, which will be relocating to Terminal 8 from Terminal 7, set to be demolished to make way for the new Terminal 6.