The perception of tequila has shifted drastically over the past two decades. Its image has evolved from a harsh shot college students ritually chugged with salt and lime, to a smooth sipping spirit enjoyed neat or on the rocks. Patrón, the world’s first ultra-premium tequila, has played a large role in transforming that image, helping change the image in consumers’ minds with every bottle sold. 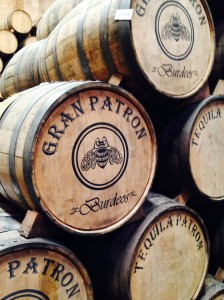 “No other spirits category has evolved this quickly, changing its image and perception so dramatically. Think back 25 years ago how absurd it would have been to think of enjoying a fine tequila just as you would a scotch or cognac. But of course it’s commonplace today, because people now recognize that a high-quality, well-made tequila like Patrón is a flavorful and versatile, sophisticated spirit,” John Kilmartin, Global Travel Retail Director at Patrón Spirits International tells TMI.

“We’re very proud that Patrón is widely credited for changing the way people perceive and enjoy tequila. While tequila is still a spirit for celebratory occasions, it is not only shots and margaritas that define Patrón. We work hard to educate retailers, bartenders and consumers about the versatility and mixability of Patrón tequila – pretty much any cocktail you can make with vodka or other white spirits, tastes great using Patrón instead.”

While Patrón does not have hundreds of years of history behind it (the brand was not created until 1989), it does have a deep commitment to high-quality, handmade craftsmanship with its tequilas, which members of the travel retail media were able to experience first-hand during a visit to Hacienda Patrón in April. The company owners have even brought back the traditional and time-consuming tahona process to make some of its tequilas, including the new Roca line, which is a travel retail exclusive outside the United States.

Patrón tequilas are produced using 100% blue agave grown in the Los Altos area in the Jalisco Highlands, Mexico. Patrón calls this the premier growing region for Weber Blue Agave because of the area’s unique red soil rich in iron oxide with a clay-silt mixture that enhances the plant’s growing capability. Patrón’s agave piñas are slowly steam baked in its small-capacity brick ovens in a lengthy process that takes place over 79 hours. The slow cooking creates unique flavor compounds that Patrón says contributes to the aroma and taste of its tequilas. This is why it does not use autoclaves or diffusors, which are faster and cheaper, says the company.

Travel retail key to showcase the Patrón difference
Because of its quality, Patrón has been able to use travel retail as an important channel to launch the tequila on the world stage.
“Several years ago when we first began to expand internationally, duty free was the first market we targeted because there’s simply no better retail channel than duty free to reach affluent, cosmopolitan, sophisticated consumers,” says Kilmartin.

The company has created products that have been exclusive to the channel including the Roca series, as well as Gran Patrón Piedra, an extra añejo tequila aged about 4 years in new American and French oak barrels, created using only the tahona process. 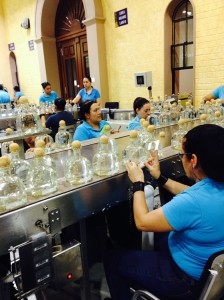 Patrón tequilas are hand corked and hand labeled. Each worker inspects the bottle, and the work of the previous worker – 60 hands touch every bottle.

The quality of Patrón is often credited with propelling the ultra-premium tequila category to new levels of growth around the world.

“We’ve seen tremendous growth over the past several years, but the tequila category is still very much in its infancy in many markets and so we definitely see the opportunity for continued growth, especially in regions such as Europe, Asia and the Middle East where ultra-premium tequila is not as widely understood yet,” says Kilmartin.

Even with its impressive growth, Kilmartin says the tequila category is still under-represented on-shelf in duty free stores.

“While we do have numerous duty free partners who understand and appreciate the potential of the category, and the Patrón brand, it’s surprising how under-represented the tequila category is in many duty free stores. Tequila (and especially Patrón) is outpacing the industry in terms of popularity and growth, yet it’s still difficult for tequila brands to secure shelf space and visibility. And even in stores where tequila is available, often it’s the low-end, unrecognizable ‘mixto’ tequilas on the top shelf, when ultra-premium brands like Patrón are commanding more consumer excitement and profit potential.”

The Patrón Process
What makes Patrón tequilas qualify as an ultra-premium spirit? The quality of the ingredients, painstaking attention to detail and old world craftsmanship are fundamental to the brand. 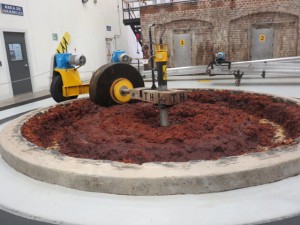 Patrón is the largest tahona tequila producer in the world.

After Patrón’s agave piñas are slowly steam baked in its small-capacity brick ovens for more than 79 hours, the agave is then crushed to extract its juice. Patrón uses two separate crushing processes employing both old world tradition and modern technology. The roller mill separates agave syrup from agave fiber. The slower tahona mill uses a heavy stone tahona wheel and a stone mill and keeps agave syrup with agave fiber. Patrón is the largest tahona tequila producer in the world with up to 10 tahonas working continuously.

The tequila produced from both processes is combined to create the core Patrón tequilas, along with its top-of-the-line Gran Patrón Platinum and Burdeos varieties. Roca Patrón is produced entirely from the tahona process.

Patrón uses separate fermentations for its roller mill and tahona processes, but both take place in small-capacity pine wood fermentators, rather than steel tanks. Patrón is one of only four distilleries to use wood fermentators, which create natural thermal control for slow even fermentation, but must be replaced every four years. Roller mill distillation is conducted without bagasse, producing a fruitier flavored distillate. For the tahona side Patron conducts the first distillation with a mixture of mosto and bagasse in small stills, under 800L in capacity, which produces a more herbaceous agave flavor.