Patrón’s Burt Stewart, a familiar face in the Canadian duty free industry and the first person ever hired by Patrón, is retiring at the end of February.

Stewart, now Patrón Vice President, Regional Sales, has held numerous roles for the company that became Patrón Spirits and takes enormous pride in how much the company has grown while he has been there. 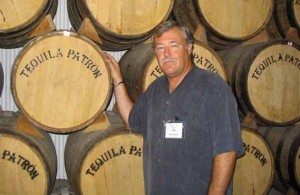 “I was anything you could put on a paper. I was National Sales Manager, State Manager, Area Manager, sometimes I had a card without a title. I went from taking the trash out, washing windows, doing everything. And then there were two employees, then four, then eight. I saw it grow to the point that this past October there were close to 300 people gathered in the room in Las Vegas for a National Sales Meeting, not including our employees in Mexico. We’ve continued to grow exponentially,” Stewart recalled to TMI.

Stewart was with the company when it was called St. Maarten Spirits and even remembers the exact date he was hired.

“Martin Crowley and John Paul DeJoria brought me onboard on October 27, 1992. I tried the tequila and fell in love with it. Back then no one knew what 100% premium tequila was,” says Stewart. “In 1993-94 we were a 13,000 case brand. In April 1998 we doubled the sales force. We went from one to two and hired a gentleman named Ed Blinn. Ed and I split the country. We traveled, introduced ourselves to all our wholesalers. It was just us.”

In 2003 when Martin Crowley passed away the company was renamed the Patrón Spirits Company. 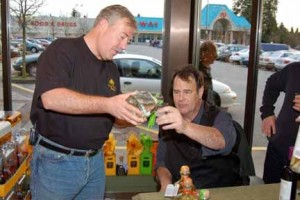 Stewart’s contributions to Patrón’s ascent have not gone unnoticed by those he has worked with, but his co-workers are quick to bring up the professionalism he brought to any task.

“When you look at our brand’s success, it’s easy to forget that in the beginning we were selling Patrón literally bottle by bottle, store by store. Burt had to cover a lot of ground back then – his territory was basically the entire globe — and he did that every single day with a smile on his face and a fire in his gut. Over the years, none of that has ever changed. Burt is one of the kindest, most professional people I’ve ever had the privilege to work with, and all of us at Patrón Spirits are going to miss him,” says Patrón’s President and CEO Ed Brown.

Stewart, who can still name the first accounts to ever bring Patrón into their bars and stores, will remain with the company with a consulting role.

“This company has been an unbelievable experience, family oriented with family values. When I joined the company back in 1992 I didn’t think I was going to be here as long as I have. If John Paul is our proud owner. I am a very proud employee. I was in the right place at the right time. I had a little bit of luck, and an awful lot of friends that helped bring me to this point in my life and my career.”