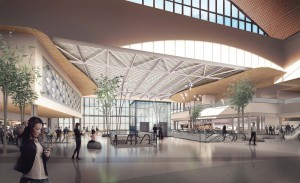 The Port of Seattle has unveiled plans to more than double the space devoted to dining and retail of its North Satellite at Seattle-Tacoma International Airport.

Dubbed NorthSTAR (North Sea-Tac Airport Renovation), the 40-year-old facility is being modernized to better serve passengers and respond to the continuing growth at Sea-Tac. Groundbreaking of the project is scheduled for the first quarter of 2017 with phase one to be complete in 2019. The full facility upgrade will open in 2021.

The $636 million project will include adding eight new gates with a 240-foot extension of the building to the west, add an upper level mezzanine, and introduce a rooftop Alaska Airlines lounge with views of the Olympic Mountains.

“This project  – which will include new gates, increased dining and retail options, and more robust Wi-Fi and connectivity – is critical for meeting the region’s needs at Sea-Tac Airport for the next 25 years,” said Port of Seattle Commission President John Creighton.

Operations at the North Satellite will continue throughout the construction process. The first phase will build out the extension to the west of the current building. Once that is complete in 2019, the second phase will renovate and upgrade the eastern portion of the building.