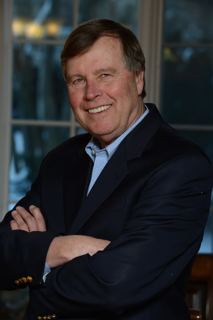 Rick Bubenhofer reminisces about special moments over his past 18 year career with Brown-Forman.

Rick Bubenhofer, Brown-Forman’s long-time Director of Public Relations, is closing one chapter of a respected career and embarking on an exciting new experience.

With his last day of work at B-F today, June 30, he ends nearly two decades with the company.

Tomorrow he starts his own small public relations operation working out of Louisville and New York City with a particular expertise in spirits and travel retail.

“I’ve been at B-F for 18 very exciting years. B-F has always given me and my team the freedom to do what needs to be done. The operating philosophy of the B-F PR team is ‘We are only limited by our imagination.’ We can dream it up,” he tells TMI’s Michael Pasternak during a meeting at the company headquarters in Louisville, Kentucky.

“One of my areas of expertise is recognizing what is newsworthy and interesting and what people want to read about or see. I am going to do what I love to do and step back from getting into management, budget, and human resources.”

Bubenhofer says his new company will capitalize on his knowledge and relationships built up over the past two decades.

“I have wonderful relationships with the Wall Street Journal, the New York Times, the Financial Times. For the past 18 years I have been dealing with the major news operations around the world.”

While spirits has been his forte, Bubenhofer says his new PR firm is open to representing many products, but with an emphasis on duty free.

Bubenhofer has been working with the duty free industry since 2000. However, prior to meeting Richard Ferne, then B-F VP, Director of Global Travel Retail, and first attending the IAADFS Show of the Americas in Orlando and the TFWA World Exhibition in Cannes, he knew little about the channel.

“I’m an American. Back then, duty free was buying cheap rum when you went to the Bahamas. That’s about all I knew about duty free. I went to the IAADFS show in Orlando for a day and I got a taste. I started working with Richard Ferne more closely and he invited me to go to TFWA Cannes.

“I immediately became massively intrigued with travel retail/duty free and started learning more and more about it. And I got to know the players, the personalities, and more importantly, the journalists.”

Bubenhofer has a strong relationship with the duty free media, organizing press trips to Brown-Forman distilleries and wineries around the world.

“The first Brown-Forman duty free press trip was so exciting. After the IAADFS show in Orlando we went to Jack Daniel’s Distillery in Lynchburg, Tennessee and down in the bayou in Louisiana at the Woodland Plantation, which was the plantation house that graced the label of Southern Comfort for a half a century. A gentleman by the name of Paul Pasternak was on that particular trip, along with Martin Moodie and Doug Newhouse. Since then, these trips have become very popular among the duty free press. I think that is what intrigued me about the travel retail industry: the personalities.”

Bubenhofer even had a cocktail named for him at a press trip to Louisiana in 2010.

“There was a drink that was enjoyed down there that had no name. It was along the lines of a shot of tequila, but instead it was made with a slice of orange, a mound of cinnamon on your hand, and a shot of Southern Comfort.

“It was christened The Bubenhofer.

“It is my understanding that it is still on the menu down at the Woodland Plantation. In my retirement I am going down there to go fishing and I will toast the journalists of duty free with a Bubenhofer,” he promises. 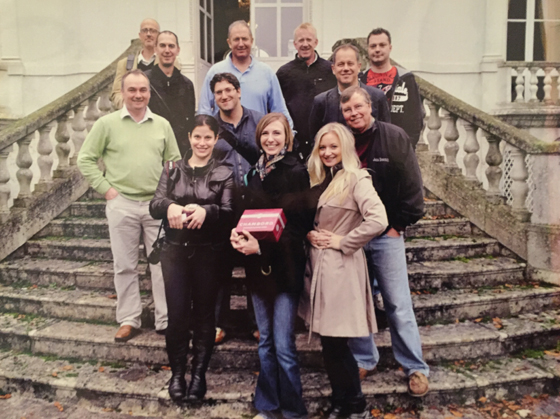 Bubenhofer was the guiding force behind the most memorable of Brown-Forman’s duty free press trips, such as this visit to Chambord in 2012.

Bubenhofer says he will particularly miss the people he has worked with at B-F. He was originally hired at B-F as a Senior Manager for Public Relations in 1999, after which he became the company’s first Director of Public Relations.

“Phil Lynch, B-F VP, Director of Corporate Communications, called me out of nowhere and asked if I was willing to come down and talk to them at Brown-Forman. I said ‘Phil, I’m flattered, but I don’t know whether I could work for a tobacco company or not.’ He says ‘No. That’s Brown & Williamson. We’re a whiskey company.’ I went ‘Well I could work for a whiskey company.’ And I did.”

“Phil Lynch is the guy who hired me 18 years ago. And when I walk through the door on June 30 he will still be my boss,” says Bubenhofer.

“Hiring Rick was the smartest thing I ever did. Rick is the best PR guy I’ve ever known. He is amazingly creative. His whole game plan is making it easy for journalists to do their job. It has been a great run for 18 years,” says Lynch.

“One of my first months at B-F this guy called me up and said ‘I hear you are the new PR guy. My name is Chris Morris. I’m on marketing for Woodford Reserve. Can you come over here and talk to me about doing some stuff with us. And that is how I met Chris Morris, who is now our Master Distiller. Chris and I have worked together forever,” he recalls.

“I have a terrific team that has been with me for quite a while. That is going to be the difficult part of retiring from Brown-Forman. I have some people who have been with me for 14 years, 12 years, 8 years. I would put the performance of the B-F PR team up against anybody,” says Bubenhofer.

Bubenhofer has had many PR successes in his 18 years with B-F, but he points to a few particular favorites.

“The Kentucky Derby has been one of my greatest experiences as Woodford Reserve has been the official bourbon of the Kentucky Derby for years. About 11 years ago we came up with what turned about to be the biggest PR coup of my career: the creation of the $1,000 mint julep [Ed. Note: Think diamonds.] It was so cool that it was an item on Saturday Night Live.

“Another great example is when B-F was going to market Amarula in the United States. We made the announcement in the Central Park Zoo and invited the cast of The Lion King to perform and had the ambassador from South Africa as the keynote speaker.”

B-F has also hosted major events at both the Cannes and Orlando shows.

“B-F announced the Jack Daniel’s Sinatra Select through duty free. We went to Cannes and held a news conference announcing the new collaboration, and the news was picked up around the world.

“Another major accomplishment was the $3 million dollar bottle of Chambord at the IAADFS show in Orlando. The liqueur bottle was encrusted with diamonds, gold and pearls. IAADFS officials said they had never seen a bigger turnout for an event. The buzz that it generated was incredible. I love that part of my job.”

Bubenhofer hopes to continue working with the duty free industry with his new job.

“I am looking forward to the next phase of my life. Hopefully I will get to see the duty free press representing clients in Cannes, Orlando, and Singapore.”