Rouge Duty Free continues to flourish in the region’s duty free and travel retail market, consistently expanding the family-owned retail enterprise to new islands and new locations across the Caribbean.

Rouge’s liquor business is also developing on plan, with the product portfolio expanding to offer all the most important brands as well as unique specialties, says Raymond Kattoura, whose company Duty Free & Travel Retail Group Inc. helps manage the business for Rouge Duty Free. After introducing liquor in its Grenada operations and rolling it out to St. Croix, Kattoura says that all future openings will carry wine and spirits.

“Liquor continues to be a key focus for us this year. Our new division has opened, and in Grenada we have expanded into liquor distribution for hotels and restaurants.”

Kattoura will be attending the Summit of the Americas specifically to meet with key spirits brands in the region.

On the retail front, the company’s goal to open 30 Rouge Duty Free stores in the next three-five years is still on track, with two new locations set to open in summer 2022.

Rouge’s other big project currently underway is the Rouge Maison concept in the heart of Christiansted’s downtown Historic District, on St. Croix in the U.S. Virgin Islands.

Located on the city’s famed Company Street in the former Sandal’s mansion, the company is refurbishing the Spanish-style historic site into a boutique galleria carrying fragrances and skincare, fashion, sunglasses, luggage and liquor with specialized niches dedicated to select high-end brands around the store. As a historic site, the house needs special restoration.

The main floor has been completed, and with fixtures and furniture now being installed, the galleria could be open in May, says Kattoura.

Rouge Maison also features a small boutique hotel with four beautiful suites on the second level, which has recently opened, says Kattoura. It will soon be joined by a hip café, serving light food, coffee, wines, located in the backyard, where restoration of historic elements, such as an old brick Dutch oven, are being completed. 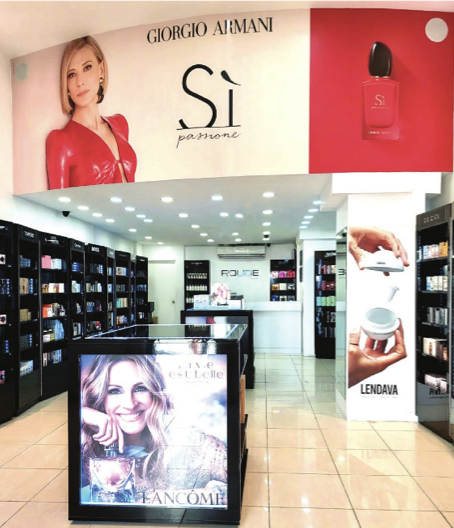 The Rouge Boutique on Front Street in the heart of downtown Philipsburg in Dutch St. Maarten was one of three stores the company opened on the island at the end of last year.

Sales are also increasing at the three new Rouge locations in St. Maarten, which opened late last year in downtown Front Street, and at Bobby’s Marina and Captain’s Hodge Pier. With St. Maarten open to cruising again, and Rouge being the only fragrance store at the Port, business has more than doubled. Rouge’s high-end fragrance boutique on Front Street is also reporting excellent sales.

Among the existing stores, Rouge St. Thomas continues to deliver record numbers for the company, and with the re-opening of Grenada to tourism, the Rouge airport stores are operating again. Rouge is looking to add more doors in Port Louis, where its flagship there has grown out of its current space.