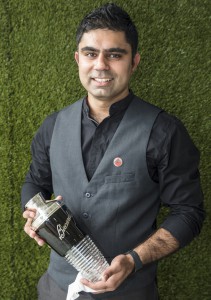 Shekhar Grover from Royal Caribbean International was awarded the 2018 Bacardi Legacy Cruise Bartender of the Year at the Bacardi Legacy cruise final held last week in Miami. Grover won with “The Royal Legacy”, his own signature cocktail created especially for the competition.

Grover scooped the ultimate prize from thousands of entries in the cruise sector and qualified for the global finals that will take place in Mexico City in May 2018, where he will compete against winners from 38 different markets.

“Shekhar has been especially inspirational with his masterful creation, exceeding expectations to deliver a unique and truly world class cocktail. His care and professionalism throughout the process epitomize best in class bartending in any sector, and he is a fantastic ambassador for the cruise industry –an increasingly important channel for the premium drinks industry,” says Zachary Sulkes International Key Account Manager (Cruise), Bacardi Global Travel Retail.

Juan Coronado, Bacardi Brand Ambassador for the United States and a Bacardi Legacy competition judge comments: “After seeing Shekhar’s performance during the 2018 Global Travel Retail finals, I’m excited to say that he truly opened my eyes to the enormous hospitality, talent and level of skills required as a cruise ship bartender. The Royal Legacy conjures spices and stone fruit flavors that, together with the oak and vanilla notes of Bacardi Ocho (8) Años, create a succulent cocktail that you want to last forever.”