Story and photos by Larry Luxner

The flight, marked with melodramatic speeches, water-cannon salutes, ribbon cuttings and parties at both ends, “symbolizes our historic long-term commitment” to providing low-cost service between the two former adversaries, JetBlue President and CEO Robin Hayes said in a statement. 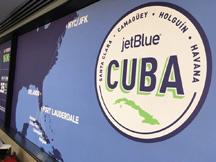 Gate F6 at FLL — which JetBlue has dedicated exclusively for Cuba flights — now sports a huge wall map showing the airline’s existing and planned routes between Florida and the Cuban cities of Havana, Santa Clara, Camagüey and Holguín.

An infographic highlights the fact that Cuba received 3.5 million foreign visitors in 2015. About 161,000 of them came from the United States — up 77% from 2014 — and arrivals through the first six months of 2016 nearly doubled compared to the first half of last year.

But virtually none of my fellow passengers aboard Flight 387 on Sept. 9, the day I flew to Santa Clara, were tourists in the true sense. Most of them appeared to be Cuban-Americans flying back — some of them for the first time in decades — to the land of their birth to see family and friends.

Some of them paid only $99 each way. But even my $436 round-trip ticket from Baltimore with a connection in FLL was an incredible bargain; only a few years ago, such a trip would have cost more than $900 on a charter airline — not to mention the hassle of obtaining a license through the Treasury Department’s Office of Foreign Assets Control.

Even though it’s dramatically easier for Americans to visit Cuba now than at any time since the 1959 revolution, the U.S. embargo is still in effect and will remain so unless Congress votes to abolish it. Before boarding, each of us had to fill out applications for Cuban tourist visas (at $50 each, payable by credit card), and complete a form explaining the purpose of travel; a JetBlue employee told me this information is sent to Cuba before the flight lands to avoid any problems on the ground.

The flight to Santa Clara took only 43 minutes. The 100 or so passengers on board applauded loudly, a few of them overcome with emotion. Many took selfies as they clambered down the waiting staircase and boarded buses for the short trip to the arrivals terminal.

It’s not clear why Abel Santamaría International Airport in Santa Clara — a sleepy provincial capital of 200,000 — was chosen to receive the first direct commercial U.S. flight. Perhaps it’s thanks to the airport’s 9,900-foot asphalt runway, which ranks as the sixth longest in Cuba (after Jose Martí-Havana, Santiago de Cuba, Varadero, Ciego de Ávila and Holguín).

Or maybe because it’s because Santa Clara is located in the center of Cuba, about 175 miles east of Havana. One thing is clear: this city is not crawling with American tourists — or tourists of any kind — and is not likely to be for some time.

“The Cuban government is very conscious that Havana’s hotels are already maxed out, and I think it would like to see more tourism dispersed to the provinces,” said Cuba travel expert Christopher Baker. “The majority of passengers on these provincial flights will undoubtedly be Cuban-Americans returning to visit family outside Havana.”

But the ethnic travel business is clearly booming.

“We’re thrilled with the service. It couldn’t have gone better,” Daniella Sandar, a JetBlue spokeswoman told TMI. “We’re really excited to launch service into Camagüey on Nov. 3 and Holguín on Nov. 10 from Fort Lauderdale, though we’re still waiting to hear from the Cuban government on the dates [for beginning service] to Havana.”

Sandar wouldn’t comment on passenger volume or profitability, but explained that only 80 passengers were aboard my aircraft with 150 seats due to weight restrictions because passengers are bringing so much heavy luggage.

Since JetBlue paved the way, American Airlines, Spirit and Silver Airways have jumped into the U.S.-Cuba market, and up to 20 flights a day are approved to Havana but are waiting the Cuban government’s go-ahead to begin. But first, Cuba wants to bring more hotel capacity online, since the capital city’s hotels are already operating at capacity.

For now, horse-drawn carriages and 1950s-era Chevrolets, Fords, Buicks and Oldsmobiles are far more numerous on the streets of Santa Clara than they are in more modern Havana. Prices are also much lower.
Many shops and restaurants list prices in both “moneda nacional” or Cuban pesos — which are worth 24 to the dollar — and in the much more valuable “pesos convertibles” or CUCs, which are worth slightly more than a dollar each.

Getting around is cheap too. I traveled from Santa Clara to the southern coastal city of Cienfuegos — a one-hour trip — in a red 1952 Hillman for the equivalent of $10. It’s even cheaper if you’re willing to share the trip with strangers; only 50 pesos (about $2.00) for that same trip, with 12 passengers stuffed into a blue 1953 Chevy truck. 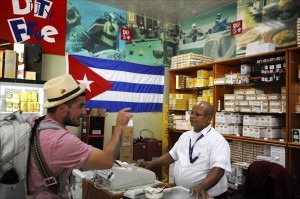 Under recently revised U.S. travel restrictions, Americans returning from Cuba may now bring up to $400 worth of goods acquired on the island for personal use, including a maximum $100 of combined alcohol and tobacco products.

But until the travel ban (and the embargo itself) is actually abolished, don’t expect duty free sales at Cuban airports — or anywhere else — to take off.

Baker says that any American can legally fly to Cuba under the ‘people-to-people’ category by signing an affadavit provided by the airline. “But I don’t think we’ll see wholesale change until the travel restrictions are lifted entirely,” he added.