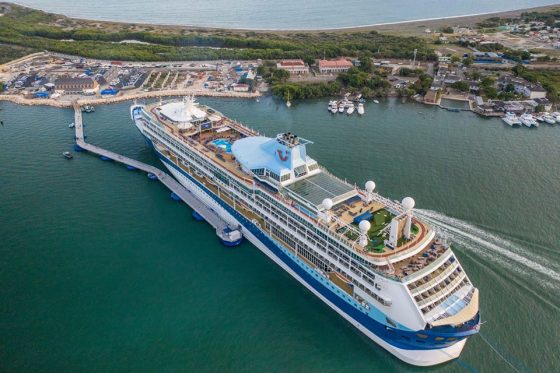 SeaWalk, the Norwegian break-through floating cruise pier, celebrated its first use in the Americas in January during the inaugural ship call at the newly built Port Royal Cruise Port in Jamaica, near Kingston.

On January 20, Marella Cruise Line’s Discovery 2 arrived and disembarked passengers at the historic port, using SeaWalk, a floating articulated bridge that is motorized and under electronic control.

The SeaWalk unfolds to meet a ship off the shore (analogous to a jet-bridge at an airport). It is anchored at the port at one end and positioned and secured alongside the ship at the other end allowing passengers, baggage, trolleys and crew to move from the ship to the bridge to the port.

SeaWalk not only facilitates the berthing of vessels in Port Royal, it does so without the dredging and extensive infrastructural works typically required to construct a conventional berthing system. This ground-breaking environmentally- friendly technology was one key reason that the Port of Jamaica signed with the company in 2018, which was SeaWalk’s first sale in the Caribbean.

“The use of the SeaWalk technology in Port Royal enables the PAJ to both adhere to its environmentally conscious operational practices as well as fulfil the objective of establishing Kingston as a permanent cruise port destination,” said PAJ in its official announcement. It is Jamaica’s fifth cruise port, joining Montego Bay, Falmouth, Ocho Rios and Port Antonio.

The port has been built nearby historic Port Royal, a notorious “pirate city” that was hit by a devastating earthquake in 1692 followed by a tsunami. The remains of the city are now under 40 feet of water.

Protecting the environment is particularly important at Port Royal, which is being preserved by the Jamaica National Heritage Trust. The ecological and historical environment in Port Royal which includes a sunken city, buried artifacts and archeological assets is highly sensitive and protected. Port Royal will only take one ship at a time, as a way of not overwhelming the fragile environment of historic Port Royal.

“Seawalk is a solution and really the only thing that could work in a place like Port Royal because of the pristine environment, and we wanted to preserve what is there,” Ole Heggheim, Chairman of SeaWalk, tells TMI.

“We have a very minimal environmental footprint and because of the environmental issues at Port Royal ours was the perfect solution. I first heard that Jamaica wanted to build a cruise port at Port Royal 15 years ago, but they could not have built a permanent pier in that area.”

Heggheim also explains that the cost of SeaWalk compared to a fixed pier is a significant advantage.

“We are normally less than half the cost of a normal pier. Of course that depends but we are substantially less expensive than a normal pier. Also, as a floating structure, our piers can be financed almost like a ship.”

Flexibility is another huge advantage, explains Capt. Svein Sleipnes, regional representative for SeaWalk in the Americas. “We have a quick release system, that allows us to secure the pier in case of a major hurricane,” he says. “Kingston is one of the largest natural harbors in the world, and very well protected, but with the quick release system you can disconnect the pier from the shoreside depending on the tidal range.”

SeaWalk Port Royal was constructed at the Vard Promar ship yard in Brazil and transported to Kingston, Jamaica in February 2019. At that time the landside facilities were being built by the POJ; SeaWalk was hooked up in August last year, while the official public inauguration took place in January 2020.

“We delivered on time and on budget,” said Sleipnes. “We always give a fixed price and there is no risk unlike with building a permanent pier where there is always a risk with the seabed. We take that risk away with our technology.”

The technology of SeaWalk could be the way forward in the future.

“We have had more than 650 calls on our piers across the world,” says Heggheim. “They are very well tested, and all the cruise lines report a very good experience with it. We are hopeful that when this current situation is over the cruise lines will have use for an environmentally friendly, cost-efficient pier that can deliver cruise passengers to many new exciting places.”

“The Jamaican port authority was very happy with the pier and the functionality,” adds Sleipnes. “Working with POJ was a great experience and I was very impressed with what they were able to do on the
shore side in such a short time. We are very happy with the team work.”