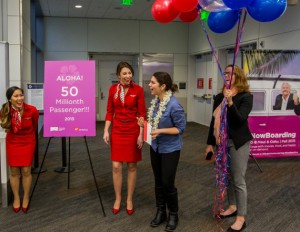 “I join all Airport employees in celebrating this milestone event in the history of SFO,” said Airport Director John L. Martin.  “The continued growth in passenger traffic at SFO reflects the strength of the San Francisco economy and a highly competitive air fare and air service environment at the Airport.”

A July 2015 benchmarking report released by the City and County of San Francisco’s Office of the Controller concluded that SFO led in passenger traffic growth among similar large airports across the United States.  The report, prepared by the City Services Auditor, compared SFO to 12 other peer airports across the nation, including Chicago O’Hare, Dallas/Fort Worth, New York-JFK, LAX, Seattle, and Washington-Dulles.  Findings noted that SFO had experienced the highest rate of passenger enplanement growth, at 33%, from 2007 to 2014.  During the same period, five peer airports experienced a loss in enplanements, reports SFO.