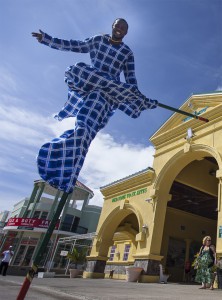 St. Kitts received its millionth cruise passenger for the first time in its history on July 16.

The milestone passenger arrived onboard Royal Caribbean Cruise’s the Freedom of the Seas. Tourism Minister Lindsay Grant led the welcome delegation and selected the millionth passenger upon disembarkation, who was treated to a complimentary island tour. The historic occasion was further commemorated with special t-shirts given to arriving passengers and everyone being treated to an experience of the island’s culture with live performances by a steel pan band, masquerades and more.

Grant noted that with two months left in the 2017-2018 cruise season, the island will increase arrivals even further.

“Reaching this milestone at this point in time is truly a testament to the strength of our relationships with the cruise lines and to the continuing appeal of our tourism product.”

As of mid-July, the Royal Caribbean’s Royal Caribbean International, Celebrity Cruises and Azamara Club Cruises had made 102 port calls to St. Kitts, bringing over 350,000 cruise visitors to the island. Including calls from all international cruise lines over the nine-month period from October 2017-June 2018, the total number of cruise ship calls into St. Kitts grew from 358 to 486 compared to the same period from 2016-2017, an increase of over 35%.