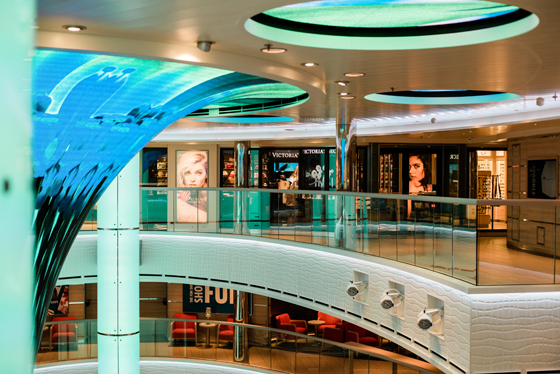 One on One with Beth Neumann, President and CEO, Starboard Cruise Services

Miami-based Starboard Cruise Services, Inc., the world’s largest cruise ship retailer, is transforming itself from a transactional business to one based on creating the most memorable experiences for cruise guests to take back home as a symbol of a wonderful holiday. Creating customer connectivity and engagement is a powerful strategy, one which will keep the 60-year-old industry pioneer at the top of its game, Beth Neumann, President and CEO Starboard Cruise Services, told TMI during an in-depth interview in the company’s Miami office.

“It has always been about constant transformation, which is what any business needs to do. The consumer desires changes, the context changes and you have to change with it. Look at how the cruise industry is upping the game. It is incredible, every year,” said the passionate Neumann, who has been at the helm of the LVMH -owned cruise retailer for the past four years. Starboard, originally known by the prosaic name of Florida Export Tobacco before becoming part of Greyhound Leisure Services, Inc., was one of the first duty free players since back in the days of the early Miami airport.

With cruising growing exponentially on an international level, the cruise retail channel has become a target of aggressive expansion from such top retailers as Dufry and Heinemann, as well as long-time player Harding Brothers. Starboard maintains its strong leadership position, however. By 2020 it will operate more than 36,000 square feet of cruise retail space on 90+ ships, including 30 mega-ships and the majority of the largest and newest ships afloat.

Starboard believes it has a level of experience and expertise that gives it a distinct advantage over its competitors.

“There are things that we are better at that no one can match,” says Neumann. “I do not believe that our competitors can match our level of service and the experience that we can offer. We are deep in this industry. We have the most incredible talent onboard our ships and we also have the backing of LVMH as well as the partnership with DFS.”

Neumann and her team have been working furiously over the past four years to make onboard retail an even more integral part of the full cruise experience.

“My remit when I came onboard was ‘how do we create that next level of value for Starboard, what is the opportunity onboard cruise ships for retail?’

“It was very clear to me right away – you just have to get on ships and talk to the people – that the retailer was in the awesome position to sell that memory of this incredible vacation and have people go home with something to remember the joy of the occasion. I saw that our best people knew exactly how to build connections, build relationships, and truly inspire people. We needed to make this the way that we work throughout the company.” 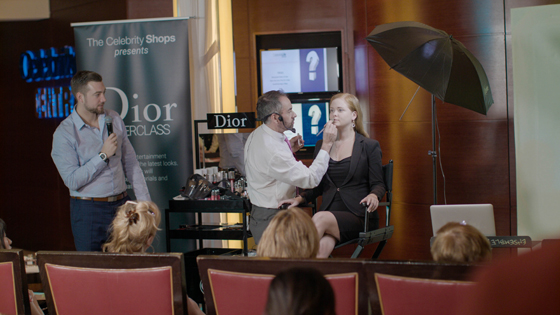 Guests learn the latest looks in a Dior Masterclass conducted by certified makeup artists on the Celebrity Equinox.

Globalization and the advent of the global passenger and the global itinerary was also creating an amazing opportunity for retail, she said.

“Fifteen years ago, Starboard was in the Caribbean and our guests were North American and Caribbean. Now, only 40% of our business is in the Caribbean, with China, Europe, South America, Alaska and Australia playing greater importance. These international guests tend to be even more attracted to retail and memories.  It is true of all cultures.”

The growing importance of mega ships created greater opportunity for stunning retail space – and Starboard was one of the first to bring major brands onto cruise ships. The list reads like a fashion and luxury Who’s Who—Bulgari, Coach, Kate Spade, Michael Kors, Cartier, Tiffany, Dior and on and on.

“These brands have fallen in love with the kind of relationships they can create with people onboard the cruise ships. You can create an incredible experience over the course of many days, you can tell a story,” explains Neumann. 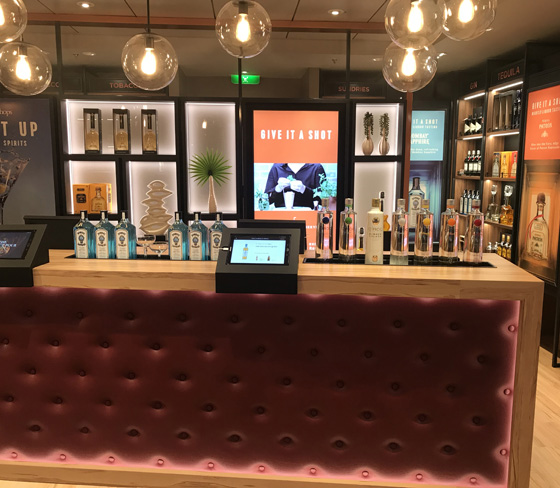 Changes in retail also stimulated a change of approach. “From technology to consumer desires, the fundamental element is that people want experiences, and will spend money on the experience not just a thing. The purchase has to have meaning.  This of course is the opposite of the Amazon way of doing business,” she says

Finally, Neumann reports that the differentiation within the cruise lines themselves is of key importance.

“The lines have become much clearer about what they stand for and who their guest is, and that enables us as a retailer to really tailor experiences. Guests on Celebrity cruises like to keep learning and guests on Royal Caribbean like adventure, for example, and our Asian guests prefer different experiences than our Caribbean guests. It made sense 15 years ago to have much of the same merchandise across all the ships, because the ships were catering to the same guests. But not anymore.”

Taking all of the above into consideration, Starboard focuses its approach to retail on entertainment, discovery, guest-to-guest connections and exceptional hospitality.

“So, we started with the brands, and have been very focused on our people and the one-on-one hospitality, but our big dream is to truly bring in unique experiential retail to each of these cruise lines,” she says

Its current onboard retail programs illustrates how carefully Starboard can create a special retail experience.

Celebrity has positioned the cruise line as “opening up the world to people” and since people experience the world through their five senses, Starboard created a retail journey immersing guests in sensory events for Celebrity Equinox. And this is just the beginning of what we will see on the new Celebrity Edge launching in November, where the retail experiences will reach a whole new level, says Neumann.

The Central Park concepts on the Royal Caribbean mega-ships are all the rage now and offer an opportunity for retail to be an even more incredible experience, she says. Royal Caribbean’s Quantum ships have been described as Las Vegas at sea, while the Oasis class is much more outdoorsy and sporty with an adventure theme.

“Our retail is all about the adventure,” says Neumann, specifically mentioning a Scotch and Watch event held in Royal Caribbean’s famed rising bar this summer.

“We talk about a different watch as the bar rises from deck to deck—Omega’s diver’s watch, chronograph, aerospace, etc. and we hold a Scotch tasting on each deck, sampling a higher age Macallan at each level.”

The new Carnival Horizon is all about fun and the brands Starboard put onboard – from Hublot and Breitling to Michael Kors and Victoria’s Secret—were all firsts. 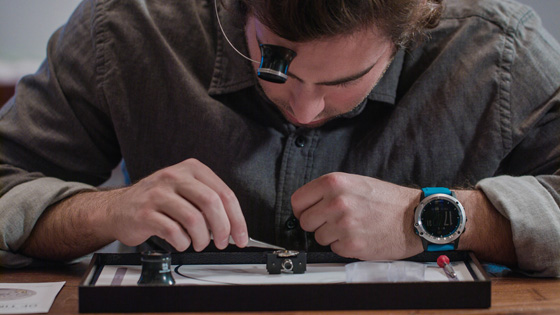 Starboard’s Apprentice of Time workshops have proven to be an immense hit on the
Celebrity ships.

The Genting ships being built exclusivity for Asia will have even more brands but the experiences offered will be different, like with the Tiffany Mystery Box. “Guests in China get a key that opens a mystery box with a free gift from Tiffany and the cruise guests line up for hours outside the shop waiting for their chance to try the key. Here it is more promotional and fun, because that is what the Chinese guests want.

“It is not just luxury, but finding the right brands for the specific audience. What we do on the Dream is very different than what we do on Celebrity, and also different from what we do with Royal Caribbean on Quantum,” she notes.

“Every new ship is launching with retail tailored to the cruise line and the itinerary. We are very true to the brand and we are creating a custom experience for every ship. It is really about enjoying yourself and discovering new things. This is the Starboard way of selling now. It is really about how to connect with people, as people. They connect with our staff in an authentic way.”

Summing up the new Starboard approach to retail, Neumann concludes:

“Selling is no longer transactional and if you treat it as a transaction, it will not work. And this is a big part of what we are transforming.” 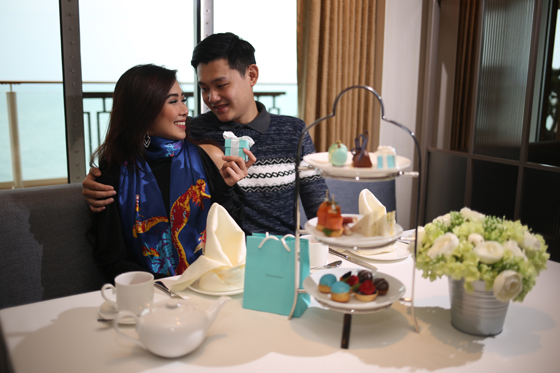 High Tea with Tiffany at Sea. The first Tiffany & Co. store at sea in Asia enhances its full selection of Tiffany jewelry on the World Dream with a special tea event featuring a set menu and showcasing exclusive Tiffany treats and British delicacies.

Starboard is launching three new ships in 2018 including Carnival Horizon, with the largest retail space in its fleet, Royal Caribbean’s Symphony of the Seas and Celebrity Edge. Starboard also recently signed multi-year retail contracts to operate on nine Carnival ships; all Costa Europe ships, three Costa Asia ships, and three of Norwegian Cruise Lines’ newest ships.  In 2019, Starboard is confirmed to launch four of the industry’s most important mega ships.