Paradies Lagardère has been awarded a new 10-year concessions contract for three new restaurants and a new hybrid retail brand at Concourse T-North at  Hartsfield-Jackson Atlanta International Airport. The new contract was approved by the Atlanta City Council on May 3, and features Starbucks, a Tropical Smoothie Cafe, a new version of the award-winning Vino […]

Eight of the top 10 airports for passenger traffic in the 2021 rankings complied by Airports Council International (ACI) World are in the United States with the two remaining in China. All top 10 airports have a significant share of domestic traffic, the traffic segment that has been leading global recovery. Hartsfield-Jackson Atlanta International Airport […]

Chicago O’Hare International Airport is once again officially the busiest airport in the U.S. in terms of aircraft operations, jumping ahead of Atlanta Hartsfield-Jackson for the first time since 2014. According to Federal Aviation Administration data, O’Hare handled more than 903,000 arrivals and departures during 2018, just ahead of Atlanta which had 895,000 arrivals and […] 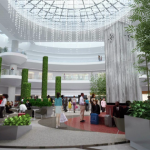 Hartsfield-Jackson Atlanta International Airport (ATL) has regained its number one spot in the airport race, serving more passengers and handling more aircraft operations than any other airport in the world in 2015. ATL has retained the title as the World’s Busiest Airport for 18 years. “Hartsfield-Jackson is once again leading the global aviation industry and […]

Hartsfield-Jackson Atlanta International Airport (ATL) ended 2015 by making history as the first airport ever to serve 100 million passengers in a single year. On Sunday morning, December 27, the Delta Air Lines flight from Gulfport, Mississippi carried ATL’s 100 millionth passenger in 2015. “What a year it has been,” ATL General Manager Miguel Southwell […]

With speculation about the interest in the sale of World Duty Free Group dominating the headlines for the past two weeks, World Duty Free announced that it has completed the acquisition of the remaining three concessions of 45 stores from HMSHost’s travel retail division in North America, for the price of US$ 19 million. The […]