Gucci’s newest limited edition in the Gucci Flora line is Gorgeous Gardenia, with a bottle design and packaging that pay homage to the nuances of the color lavender. It launched worldwide in travel retail on July 1. An intensely feminine fragrance, Gucci Flora Gorgeous Gardenia opens with red berries that give way to floral notes […]

Coty has named Fran Summers as the new fragrance and make-up face for the Burberry brand. The British model has a long-standing relationship with Burberry and has walked in every runway show since Chief Creative Officer Riccardo Tisci’s inaugural collection for the house. She has also appeared in the brand’s campaigns for Spring/Summer 2019, Autumn/Winter […] 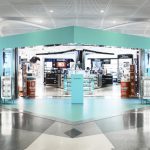 In the two years since Coty merged with the Procter & Gamble Company’s fine fragrance, color cosmetics and salon products businesses, the company has made huge strides in completing an incredibly ambitious and complex transformation which involved fundamental changes to and simplification of its business processes.* According to the company’s latest financial results, important […]

The vision for GUCCI BLOOM in travel retail was to create a ‘pop-up’ store that strongly communicated GUCCI BLOOM’s key attributes of vitality, creativity, quirkiness and uniqueness. Coty is working with Dufry in Brazil to host this stunning animation in August and September. The ‘pop-up’ created by Coty captured the attention of passengers and transformed […]

In a strategic shift, British fashion house Burberry has entered into a long-term licensing agreement with Coty Inc. for its Burberry Beauty luxury fragrances, cosmetics and skincare. Under the agreement, Coty will develop, manufacture and distribute the full range of Burberry Beauty products globally.   Coty will pay £130M in cash for the long-term exclusive […]

One of the biggest developments that took place during the week that TFWA World Exhibition took place in Cannes was the official completion of the merger of The Procter & Gamble Company’s fine fragrance, color cosmetics, salon professional and hair color and certain styling businesses (“P&G Specialty Beauty Business”) into Coty, Inc. Coty is now […]

Coty’s Calvin Klein Fragrances is giving travel retail an early Christmas gift, launching ck2, its new gender-free fragrance for men and women, exclusively in Travel Retail in December 2015, followed by a worldwide launch in February 2016. Ck2 was launched in the Caribbean on Dec. 1 by Tairo International, which is playing up its Caribbean […]

Coty Inc. this week announced a new organizational structure made up of three divisions and the future leadership team for the company. The new structure and management will become effective subject to completion of Coty’s merger with The Procter & Gamble Company’s fine fragrance, color cosmetics, salon professional and hair color and styling businesses. Bart […]

It is finally official. After months of speculation, Coty Inc. has announced that it has agreed to buy 43 of Procter & Gamble Co.’s beauty brands for about $12.5 billion in a deal that would more than double its sales and transform it into one of the world’s largest cosmetics companies. With the new brads, […]

Coty Inc. has completed its acquisition of French cosmetics brand Bourjois from Chanel for approximately 15.43 million shares of Coty’s Class A Common Stock. Bourjois has a portfolio of color cosmetic products that are sold through approximately 23,000 points of sale in more than 50 countries around the world, with leading positions in some of […]