MAC Cosmetics celebrated the grand opening of its new boutique at Indianapolis International Airport (IND) this week with a special event in association with Dress for Success Indianapolis by giving a small group of local women makeovers and professional headshot photos to enhance their presence for career success. MAC Cosmetics is one of 15 new […] 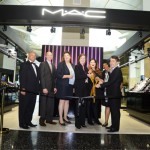 Miami-based Duty Free Partners officially opened a stand-alone MAC boutique in San Diego International Airport on April 4. The official ribbon-cutting was attended by airport and MAC executives, and DFP CEO Fabiano Vivacqua, and was broadcast by local news stations. The 400-sqf shop is located in Terminal 2, and is the airport’s only stand-alone high-end […]