“Largest brand activation undertaken since Patrón Tequila joined the Bacardi portfolio in 2018” Bacardi Global Travel Retail has launched a Patrón Tequila tasting bar at Cancun International Airport designed to create a “home away from home” experience reminiscent of Hacienda Patrón in Jalisco, Mexico. The signature bar is the center-piece of a 5-year collaboration between […]

Family-owned Bacardi Limited announced today it will acquire 100% of Patrón Spirits International AG and its ultra-premium Patrón brand. The transaction, which is subject to customary closing conditions, follows the successful relationship the companies have had for nearly a decade since Bacardi’s initial acquisition of a significant minority stake in Patrón in 2008. The transaction […]

Patrón Spirits International is riding the popularity of tequila around the world as it enjoys double digit growth across its tequila portfolio. The latest data from IWSR predicts that global volumes of tequila will grow by 7.1 million nine-liter cases over the next five years, with its largest gains in the U.S. market and additional […]

Ultra-premium tequila Patrón has embarked on a pursuit to find the best margarita, and has launched the “Search for 2016’s Margarita of the Year.” The program began on National Margarita Day (February 22), and the winner will be announced in late April, in time for Cinco de Mayo. Patrón, the global leader in the 100 […]

Patrón tequila is celebrating its Mexican heritage by introducing a limited edition collector’s gift tin for Patrón Silver tequila which will be available in duty free stores globally. “Though Patrón is enjoyed across the world, every drop of our tequila is produced in the town of Atotonilco el Alto in the picturesque Jalisco Highlands in […] 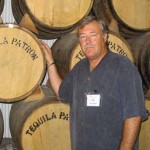 Patrón’s Burt Stewart, a familiar face in the Canadian duty free industry and the first person ever hired by Patrón, is retiring at the end of February. Stewart, now Patrón Vice President, Regional Sales, has held numerous roles for the company that became Patrón Spirits and takes enormous pride in how much the company has […]