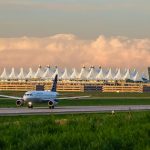 One on One with CPI Managing Director Susan Gray There is an unprecedented wave of airport infrastructure and terminal investments underway in the U.S. – a phenomenon that began prior to the pandemic outbreak, but which should accelerate since the U.S. Department of Transportation’s Federal Aviation Administration (FAA) announced it is awarding nearly $1 billion […]