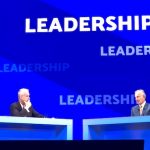 The 35th TFWA World Exhibition & Conference was deemed an unqualified success, according to the organizers. Following a week of spectacular weather on the French Riviera, the annual industry event closed on an upbeat note as TFWA President Alain Maingreaud announced that a record 7,531 delegates visited the exhibition during the week, an increase of 7% […]

Family-run duty free operator International Shoppes has ventured outside its northeast United States home for the first time with six stores in three terminals at George Bush Intercontinental Airport (IAH) in Houston. IS Vice Presidents Scott Halpern and Matt Greenbaum confirm to TMI that IS opened its first store in the airport this morning […]

As readers of TMI may have noticed, we have begun running a series of advertisements highlighting the contributions that the travel retail industry makes to the travel industry and the wider economy. The campaign was created by industry association TFWA to mark the 70th anniversary of the duty free industry this year. The global campaign, which will be […]

Leading travel retail company Dufry reports that turnover grew by 4.7% reaching CHF 1,706.8 million in the first quarter of 2017 from CHF 1,630.2 million one year earlier. As a result of stable growth in most locations and improved performance in specific businesses positively impacted by Brazilian and Russian travelers, organic growth continued to accelerate […]

The 2017 IAADFS Duty Free Show of the Americas delivered surprisingly strong results to exhibitors and operators. Billed by organizers as a “transition year” before next year’s Summit of the Americas launches in partnership with ASUTIL, show goers feared that lower numbers and fewer buyers would negatively impact the value of the show. Despite fewer […] 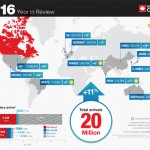 Canada welcomed 19,979,334 travelers in 2016—the highest number since 2002 and second highest ever. International arrivals increased by 16% in Destination Canada’s 10 overseas markets, and 10% in the US market, for an average of 11% growth across the board. “I’m excited to say that 2016 was a fantastic year for our tourism industry,” said […]

Canada’s duty free sales were up in both airport and land border stores in 2016, according to the latest figures from the Canadian Border Services Agency (CBSA). Airport duty free sales were $407 million in 2016, rising approximately 8% versus 2015 sales. December sales increased 15%. Perfume, Cosmetics, Skincare, the number one category in Canada’s […]

Tito’s Handmade Vodka, distributed in North America Duty Free by EWTRA, is increasing its footprint in airports and cruise lines across the region. EWTRA has launched a program of high impact activations that celebrate Tito’s American heritage and craft credentials at Boston Logan International Airport, and JFK International and LaGuardia airports in New York. The […]

As it transitions into a new more service-driven format for the annual Duty Free Show of the Americas, the International Association of Airport and Duty Free Stores (IAADFS) has revealed the list of speakers presenting in the two education sessions being held on Monday and Tuesday mornings, March 27 and 28, 2017. The IAADFS website […]

Beam Suntory GTR is set to launch a brand new global travel retail exclusive range in April 2017, inspired by Bowmore distillery’s No.1 Vaults, the world’s oldest Scotch maturation warehouse. The new range, a return to age statements for the first time in five years, features Bowmore 10 YO, 1 Liter Bowmore 15 YO, and […]

The Travel Markets Insider newsletter is attached to this post as a PDF file. To open the PDF file, please click on this link. Record breaking Caribbean tourism arrivals released this morning from the CTO, and the widening Trump slump hitting travel to the US after President Donald Trump’s ban on nationals from seven primarily […]

US airports target of protests against President Trump’s controversial immigration ban   Breaking News: Federal judge issues emergency stay against ban CNN has just reported that a federal judge granted an emergency stay Saturday night for citizens of seven Muslim-majority countries who have already arrived in the US and those who are in transit, and […]