One on One with Dan Cappell, Chief Commercial Officer, Ontario International Airport

One of the biggest stories in the North American aviation industry is the rise of Ontario International Airport, a medium-sized airport located 32 miles from giant LAX in California. Once a part of the Los Angeles World Airports Group, ONT returned to local ownership in 2016. Since then, ONT has become one of the aviation industry’s great success stories, with passenger volumes climbing more than 30% to a pre-pandemic peak of nearly 5.6 million. Over the past year, Ontario has posted one of the strongest travel recovery rates in the country and was named by Global Traveler magazine as the fastest-growing airport in the country for the third year in a row.
The airport’s concession program has evolved along with its passenger growth, especially because it is overseen by Dan Cappell, a familiar figure in the travel retail industry, with a 30-year career that spans the brand side, the operator side and the airport side of the business. In a far-ranging interview with TMI, Cappell talks about where the airport is now and its plans for the future. Lois Pasternak reports. 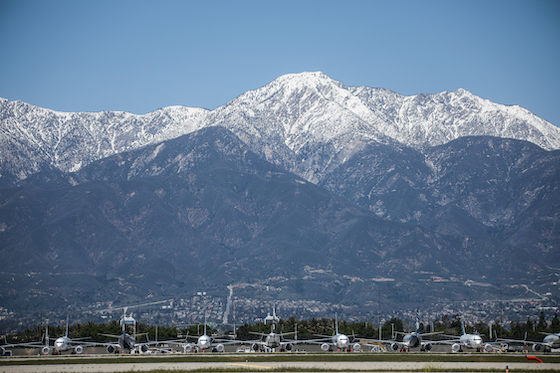 Southern California’s Ontario International Airport (ONT) is located 32 miles from LAX in the heart of one of the most robust population and economic centers in the U.S.

“When we took over the airport in 2016 the decline in passengers was so steep that traffic was at an all-time low. As a result, a large part of our concession business was shut and some concessions, including key restaurants, had been closed for a couple of years. The new management team came in November 2016, and from 2017 to 2018 we worked on getting the foundations established, also getting the right people onboard. From 2019 onwards we began accelerating, not only in terms of our growth in passenger traffic but right across from A to Z of the business operations,” Dan Cappell, Chief Commercial Officer, ONT tells TMI.
ONT is ideally positioned to continue growing for years to come. The airport does not have curfews nor pax capacity issues, which is an advantage over other airports in Southern California. The airport is also in the heart of one of the most robust population and economic centers in the U.S. During the first year of the pandemic, the surrounding area grew by 33,000 households, according to Steve Lambert, Public Information Officer at Ontario International Airport. It is also a major hub for UPS, Fed Ex and Amazon, placing it within the top 10 airports in cargo volume.

“One of the core focuses has been to rebuild traffic numbers that peaked at 7.2 million in 2007. Our forecast sees our traffic doubling from 5.5 million to more than 10 million by the time the Olympics arrive in Southern California in 2028. We have a large land base which is right for development and we have a growing number of airlines and routes, all of which make us more attractive as far as concessionaires are concerned,” said Cappell. 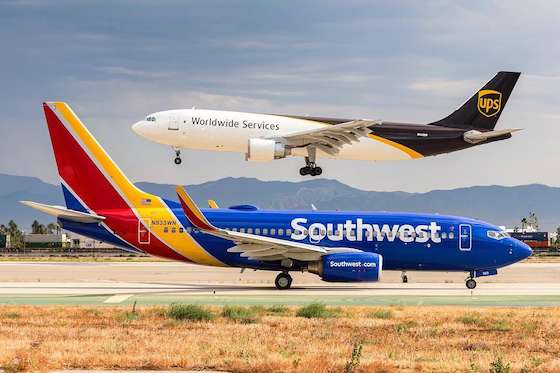 With its mix between business and leisure traffic, ONT has shown incredible resilience, and as of today is at 99% of pre-COVID levels, one of the highest in the country. As a hub for UPS, FedEx and amazon, it is also a top 10 airport of cargo.

3Sixty Duty Free sees potential
The 10-year concession agreement signed between Ontario International Airport Authority (OIAA) Board of Commissioners and 3Sixty Duty Free and More in January is the best example of the potential companies see in the airport, says Cappell. Located in terminal 2, the store is due to open in September.
“The concession with ONT will be 3Sixty’s first operation on the West Coast and is an ideal starting point for them. We reached a very good agreement with flexible terms that will increase as the business increases. We are looking at this as a long term partnership.
“The contract shows the faith and confidence that 3Sixty and their Board have in ONT and we are delighted to have established a partnership with a world leading duty free operator. From our perspective it is a major coup for us as an airport. Outside of San Francisco and LAX we will be the only other airport in California to have a duty free operation,” he said.
“While the business initially will be relatively small, we will work hand in hand with 3Sixty to develop a core duty free business for our customers. We are very excited that we will be able to offer our customers a world-class duty free offer later this year. It will also have a duty-paid element. It takes courage especially during the COVID era to establish a new duty free offer.”
ONT is a full-service airport that has nonstop commercial jet service to 18 major airports in the U.S., Mexico and Taiwan, and connecting service to many domestic and international destinations. It currently has four international routes: Taipei, Mexico City, Guadalajara and San Salvador.
“Pre-COVID China Airlines had a daily flight to Taipei that was running at about 85% occupancy. This is really strong. When those daily flights come back, which we are expecting in the near future, that will obviously be one of our core pillars for duty free. 3Sixty’s relationship and experience with Lotte can be a big Full concession program grows ONT is also in discussions with existing partners for contract extensions, and new operators for food, beverage and retail opportunities. 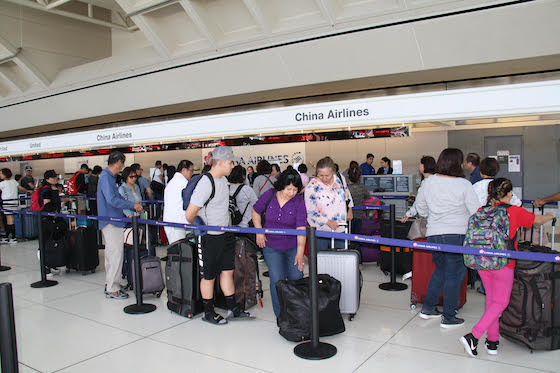 “At the start of 2019, about 60% of our concession space was unoccupied. We have filled 80% of our space and anticipate that we will have 100% occupancy of all of our concession space within 18 months.
“During the past 12 months, we have signed contracts with Dunkin Donuts, Chick-fil-A, Subway and 3Sixty Duty Free & More.
“We also just renewed Hudson’s contract up to 2032, and they are bringing in their multi-brand Evolve concept, which will significantly enhance our retail offer. Our Board recently approved a contract with Brewery X (the fastest growing independent Brewery in California) for a bar and casual dining experience in Terminal 2. In addition, we have appointed Swissport to operate our airline lounges in both T2 and T4,” said Cappell.

Innovation and tiered contracts attract concessions
“The fact that we have been able to secure great brands and companies on long-term contracts despite COVID and the impact on the business shows both ONT’s belief in the future of the airport, but also that of our partners. We have had an open mindset and approach to negotiating the commercial terms and conditions, and in all cases have secured waterfall tiered agreements: As the business grows and develops, so do the concession fee returns,” Cappell explained.
“We try to really embrace the partnership element of working together instead of using inflexible rigid percentages in our contracts. This is a system that can work for smaller and medium sized hubs. We still have financial obligations but if we are going to differentiate ourselves and have a world class concession program, we’ve got to reach agreed terms and conditions with the operators.
“We keep an open mind but we’ve also got to ensure that the airport benefits as the concession business grows and develops. So yes we are flexible and open minded, but we have to ensure that it is a fair deal for both parties. That is a win-win situation.”
ONT is also enhancing it retail program with its own brand of logoed merchandise which they are hoping to launch in July.
“We will have a retail store landside that will have online ordering and product dispatch within 24 hours. It will be manned during the day, and gives the non-traveling public the opportunity to come in and buy,” said Cappell.
To further widen the offer, the airport has designed eight pop-up stores which can meet a variety of needs, said Cappell.
“First, these pop-ups can be used by our existing concessions for a major promotion, launch or seasonal event, taking it out of the retail environment and onto the concourse. For example, Hudson had a big range of Super Bowl merchandise when the event took place in Los Angeles this year. And we won’t charge them rent, because it is an incremental offer for the customer, plus it drives our gross revenue and we obviously get the returns, and as pop-ups they are mobile and allow us to take the product to the customer.
“Pop-ups give us the opportunity to encourage local participation for a short period of time (1, 2 months or seasonal). It will allow us to offer local brands short- term leases without the major investment to promote their brands within the airport environment. This is pretty exciting. And we can obviously use the pop-ups to sell some of our ONT merchandise as well as to take big promotional activations out of the store.
“Along these lines, one of our F&B operators will be opening a 3,500 sqf outlet that will incorporate an interactive environment. If it all goes according to plan we will be the first airport in North America to do this. It will take the customer experience to a new level,” he said.

In addition to the concessions, ONT brought the advertising and sponsorship operations in house, resulting in a doubling of returns to the airport (despite COVID and the impact on advertising revenues).
“We now have a very broad width of advertisers at the airport –Porsche Audi, UCR Health, Santo Spirits, Barclays, University of Redland, Discover Claremont, Yaamava Resort and Casino, Keck Graduate Institute, AC Clippers, Golden Corral, Dignity Health and Northwest Mutual to name but a few. Our focus has been to add value wherever possible and not solely rely on a static or 10 seconds on a digital loop,” said Cappell.
“Customer experience is a priority as far as the Board is concerned. So we are trying to push the envelope in terms of the offer, but also incorporate elements that will add attractions to the customer to go into the commercial environment. Porsche Audi showcased a car in the terminal, for example, (and sold it after four days) but is adding real added value by holding a special event for its VIP customers in the ONT hanger where Ford vs Ferrari was filmed.
“That is the sort of experience that Porsche and Audi would want to give their best customers. And it is where we think outside the box and how we can add value to a potential sponsorship,” said Cappell.
“Another partner, Dignity Health, has completely refurbished all of the mother’s rooms, refurbished the drinking fountains and introduced a health and well-being educational program for our passengers.” 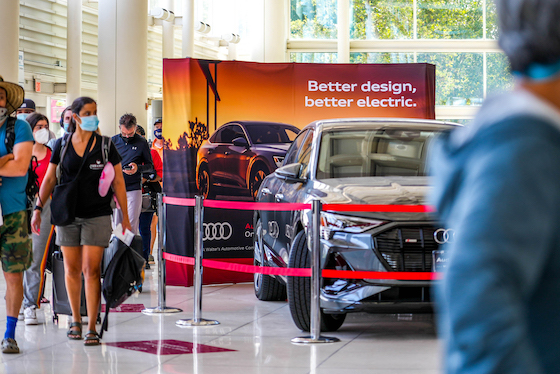 ONT adds value to airport sponsorships and advertising with concourse displays and special events, like this line up new cars from Porsche Audi.

Looking ahead
All future development of the concessions depend on passenger growth, and ONT is developing a capital investment plan to increase infrastructure to meet forecasted increases in passenger numbers. The plan includes a new Federal Inspection Services facility and that will further enhance customs and immigration for internationally arriving passengers.
“Obviously, any terminal expansion will have additional commercial space,” said Cappell.

Routes development is another major focus and a little more than a year ago ONT brought its routes service development in-house and appointed a senior air service development manager.
“The goal is to increase frequencies on our existing routes, bring new airlines in and add new destinations. We are also well into the planning for the terminal expansion program and that also will be another major step in allowing us to meet the 10 million passenger forecast by 2028. We are extremely excited with the current program and confident that as we continue to grow our traffic, our concession business will go from strength to strength.”