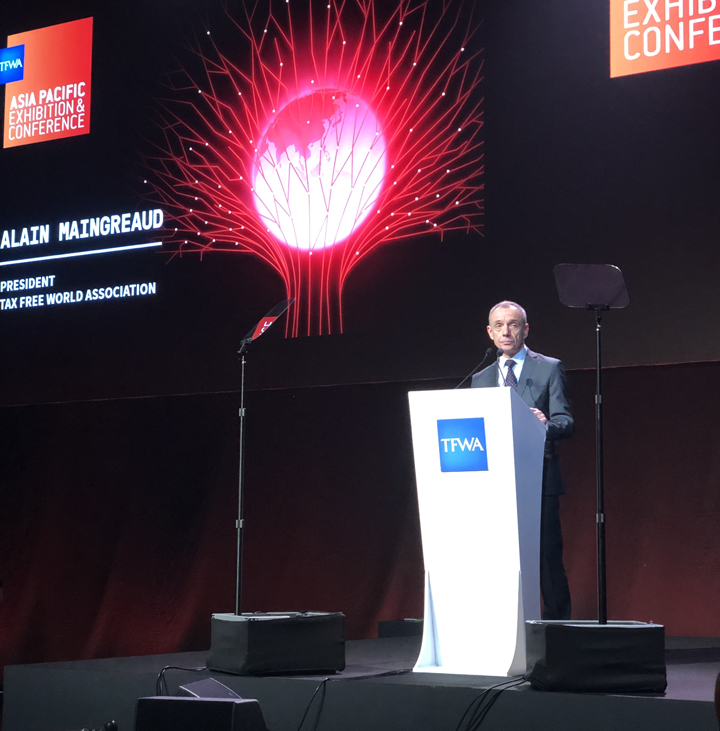 While Latin America’s major economies continue to decline and its duty free stores suffering as a result, the Asia Pacific region’s tourism growth rates are lapping the global average, it was announced at the 24th TFWA Asia Pacific Exhibition & Conference held in the beginning of May in Singapore.

The Singapore event, with another year of record attendance, was filled with eye-opening statistics and information that underscore Asia Pacific’s dominant role in global travel retail and promises further growth in the future.

A total of 3,367 delegates visited this year’s show in Singapore, an increase of 5% versus 2018. This figure included representatives from 1,426 companies, up by 10.5% against last year. The number of delegates from duty free and travel retail operators, landlords and agents was 2,567 compared to 2,534 last year.

“Of course it’s gratifying to see our numbers up yet again, but it’s not just about the quantity of visitors – quality matters too. We certainly had a substantial number of important decision makers in our exhibition halls this week, which is a great reflection of the dynamism of this region,” said TFWA President Alain Maingreaud.

“Visiting the Asia Pacific region today, with its vibrant economy and thirst for business, is a refreshing reminder for a European like me that there is life beyond Brexit and the equally intractable problems facing some other parts of the world,” said Maingreaud in his opening remarks of the Conference.

“The Financial Times has declared this the dawn of the Asian Century, predicting that by next year, more than half of the world’s GDP will be generated here. If we look at the tourism sector, Asia Pacific is attracting visitors at an impressive rate these days.”

Maingreaud said traveler data from the first of this year’s TFWA Monitor studies prepared by ForwardKeys shows that, while international inbound tourism rose by 2.9% worldwide in 2018, the growth in the Asia Pacific region was more than double that at 6%.

“As we learned at the recent TFWA China’s Century Conference in Hainan, China continues to drive travel in the region and beyond, but traffic to other parts of Asia, such as Vietnam, Indonesia, the Philippines and South Korea, is also developing fast,” says Maingreaud.

“Looking at this region’s expanding share of global inbound tourism, 31% last year and closing rapidly on Europe, the leader with 34%, I’m reminded of the moment in 2012 when industry sales in Asia Pacific overtook Europe’s for the first time, making this the world’s number one region for duty free and travel retail.

“Since then, Asia Pacific has pulled further ahead, and passenger forecasts suggest that pattern will continue. More than ever, this is where the trends for our industry are established and where we should look when planning for the future.” 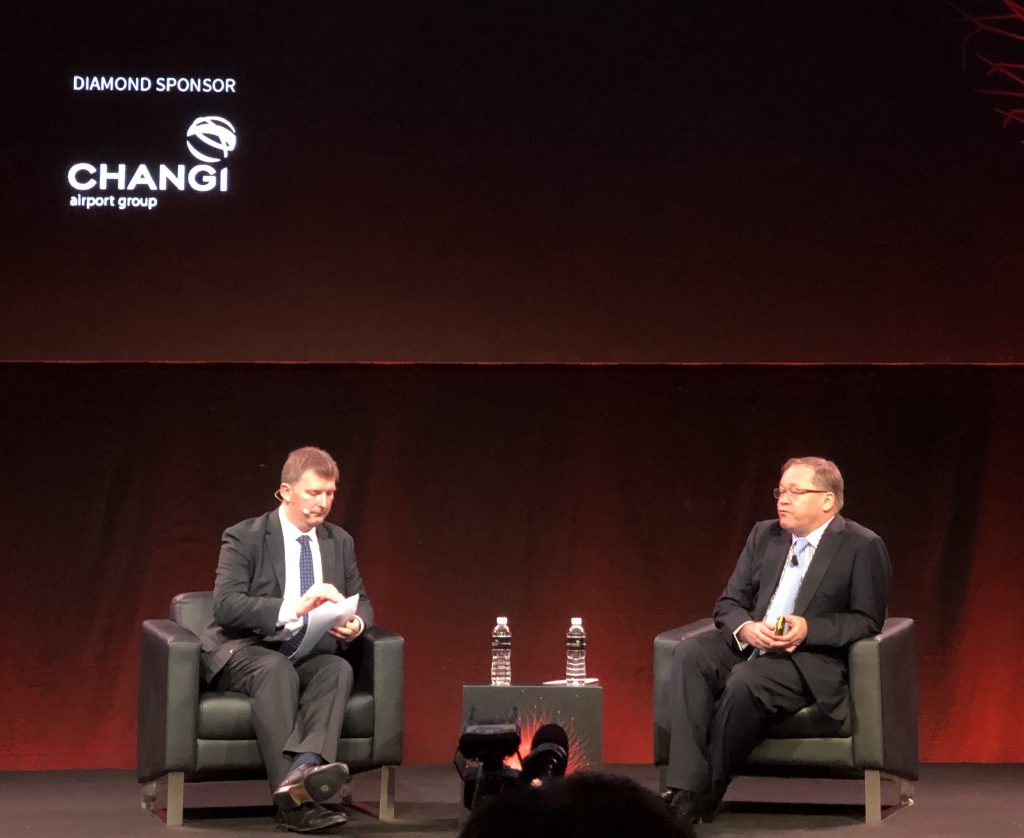 TFW Managing Director John Rimmer in a Q & A session with Andrew Ford, outgoing president of the Asia Pacific Travel Retail Association (APTRA), who updated delegates on how APTRA is helping the region build on its leadership status. Grant Fleming, Head of Strategic Development, ASIA, Lagardère Travel Retail, was elected President of APTRA, succeeding Andrew Ford, on May 15. Fleming has served on the Board since 2017, most recently as APTRA Treasurer.

Generation Research backs up Asia Pacific’s dominance of global travel retail sales, and the fragrance and cosmetics category’s integral role in that success. Generation reports that worldwide travel retail sales passed the US $70 billion barrier for the first time last year to finish at over US $75 billion.

“That represents growth of 9.3%, roughly the same as in 2017. But with momentum slowing in Europe and the Americas, it was Asia Pacific that propelled the global performance. Duty free and travel retail sales in this region exceeded US $35 billion last year, up 14.2%. At the current rate of progress, Asia Pacific will account for more than half of the business worldwide within the next two years,” says Maingreaud.

Fragrance and Cosmetics sales in Asia Pacific were worth more than US $18 billion in 2018, as the category grew by just under 20% versus the previous 12 months.

“Over 50 cents of every dollar spent on duty free and travel retail in this region goes towards a fragrance and cosmetic purchase. The next largest product category, fashion and accessories, claimed a little over 13 cents by comparison and showed only half the growth of fragrances and cosmetics.” 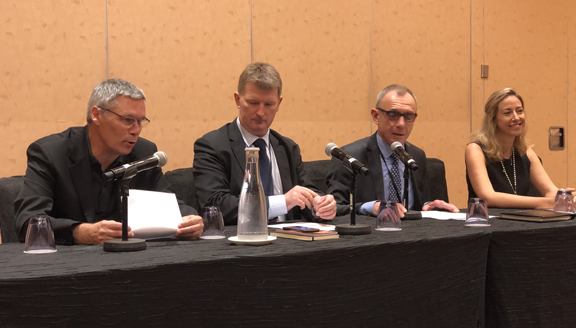 Maingreaud said that while the sales figures are positive in the region, the numbers don’t tell the whole story. 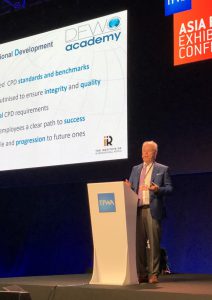 Derek Hughes, Managing Director for the Institute for International Retail, spoke about the launch of the DFWC Academy and the first online course being offered for a Certificate in Duty Free and Travel Retail. Hughes said the Academy, which promotes professional standards and provides a platform to develop and motivate “high potential employees,” could be integral to keeping these sales professionals around.
“You might ask ‘why train our people if they leave?’ And I say to you ‘what if we don’t train them and they stay?’” says Hughes.

“We all know that sales are not growing in line with traffic. More passengers don’t always mean more sales. Unless we have a better understanding of who is traveling, and what their real needs are, we will never match sales growth to traffic growth.”

Remaining relevant is key to the continued growth of the travel retail sector in the region and throughout the world, says Maingreaud, in his first address as President to the TFWA Asia Pacific Conference.

“It’s finding the answer to the question: why should a traveler shop in our stores? If the answer is no longer price, then what is it? Is it convenience? Not when our online competitors can deliver to customers’ doors at a cheaper price than we can offer. Is it differentiation? Not when so many shoppers tell us that duty free stores look the same wherever they go. Is it a ‘sense of place’ then? Maybe, but there is scope for us to show far greater creativity and innovation here. It should be about more than just putting a city photo on the product packaging,” says Maingreaud.

“As others have noted, the answer lies in the experience we can offer our customers. The best retail experiences come when we find a great product, at a competitive price, presented in a unique, inviting environment, by staff who are sensitive to our needs and who make us feel special. This last point is crucial. In an age of algorithms, chatbots and artificial intelligence, it’s human beings that still make the difference between a disappointing retail experience and a great one.”