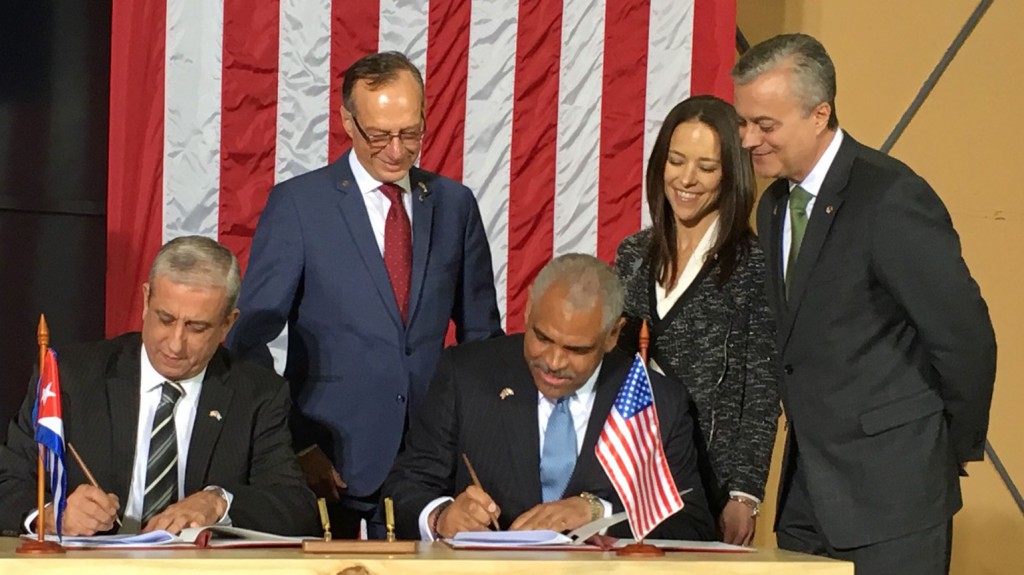 Carnival Corporation & plc made history on March 21, 2016 when it announced that the Cuban government had granted approval for the company to begin travel to Cuba. On May 1, Carnival’s newest cruise brand, Fathom, began seven-day cruises every other week from Miami to Cuba onboard the 704-passenger MV Adonia, visiting the historic ports of Havana, Cienfuegos and Santiago de Cuba.

Demand has been so strong, Carnival has added two more sailing dates for fall 2016, and as of September, is still the only U.S. cruise line currently sailing from the U.S. to Cuba.

The historic itinerary was two decades in the making, explains Giora Israel, Carnival Corp. senior vice president of global port development, who has spearheaded the endeavor since day one.

“We first started thinking about the possibility of sailing to Cuba back in 1996, when we acquired a 50% share in Costa Cruise Lines. Costa had just renovated the cruise terminal in Havana the previous December, and was sailing there regularly. But when we closed the deal with Costa, we had to abandon any cruises to Cuba because of the U.S. embargo laws,” Israel tells TMI.

Despite the fact that Costa could no longer sail to Cuba, Israel set up a Cuba Committee to accumulate information and prepare Carnival for the day when cruise ships would be allowed to sail to the island.

“Carnival was buying other cruise lines that had visited Cuba, and they also had to abandon the destination once they became part of our company. But this did not deter me in any way or make me stop looking at Cuba,” he says.

“The cruise industry was created in Miami,” points out Israel. “The modern day cruise industry as we know it was created in the 1960s with Royal Caribbean’s Sun Viking, Norwegian Cruise Lines M/S Sunward and the Carnival Mardi Gras in Miami, and these three companies still control the industry. Cruising has become such a global success — but none of us had ever sailed to Cuba.

“Think about it. We have this land mass, Cuba, which is larger than all the other Caribbean islands combined, sitting right off our coast 90 miles away, and we have to sail around it. We have 14 cruise ports in the U.S. but Americans had to sail around this major destination.

“But since the cruise industry was born after the embargo was put in place, the truth is that we didn’t miss sailing to Cuba. It had never been there for us.”

Until “D-Day” that is. On December 17, 2014, the Castro government released Alan Gross, a U.S. government subcontractor serving a 15-year prison sentence in Cuba for “crimes against the state.” He had been convicted in 2011 in a verdict that further aggravated relations between Washington and Havana. Hours after the release of Gross in Cuba, the Obama administration announced that the U.S. was taking steps to restore full diplomacy with Cuba.

It took months of complex negotiations and diplomatic wrangling, but the thaw in relations between the two countries eventually resulted in a flood of developments.

“We didn’t know when it would happen, but we were ready,” says Israel. “The release of Alan Gross was key and then the special moments just kept coming. We were in contact with U.S. Assistant Secretary of State Roberta Jacobson, the chief negotiator for the United States during diplomacy talks with Cuba. Within hours of President Obama’s speech, U.S. flags went up in Cuba. We weren’t devils anymore.”

Israel says that the opening of the Cuban embassy in Washington on July 20, 2015 was another “profound moment,” followed on August 15 when the U.S. flag was raised over the reopened U.S. embassy in Havana. In March of this year Barack Obama became the first sitting U.S. president to visit Cuba in nearly 90 years. And then with the March 21 historic news that Carnival had been approved to sail its “social impact” Fathom cruise brand between the U.S. and Cuba, it looked like the 20 year wait was over.

Unexpected trouble arose after Cuban-Americans in Miami, protesting that Cuban rules barred them from traveling to the country of their birth by ship, made Carnival consider delaying the first sailing. But after Cuba announced on April 22 that it was changing the rule to allow Cubans and Cuban-Americans to travel on cruise ships, the inaugural sailing took place as scheduled.

“Carnival Corp. is not political and is not involved in diplomacy. Our job is to deliver a safe cruise and a good product. But we must comply with every regulation and rule of the U.S. government and we promised to comply with and respect all the Cuban laws. We also had to be sensitive of the emotions and history of our many Cuban employees.

“The restrictions on Cubans entering and leaving by boat was not a law but rather a regulation enacted 45 years ago after a hi-jacking. This was just one of many details that had to be resolved. We met many times with the Cuban and U.S. officials to carefully craft and coordinate our plans so that we could meet all the regulations of both countries. We had to go step by step to make this happen,” said Israel.

But happen it did. A sailing of 90 miles that only took 20 years to complete.