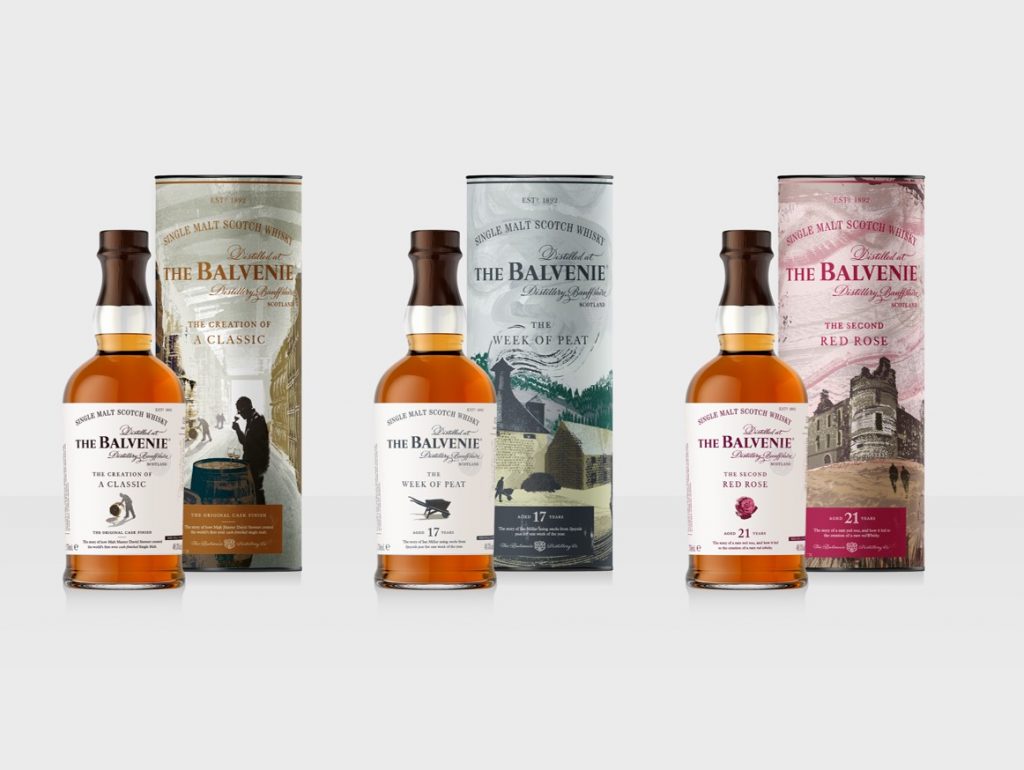 The Balvenie Stories collection, which launched in 15 markets in May this year, previously consisted of three expressions, each of which “told its own tale in liquid form and gave a nod to the protagonists and unexpected twists that led to its development.”

The three Global Travel Retail expressions of The Balvenie Stories, The Creation of a Classic, The Week of Peat and The Second Red Rose, continue to celebrate the human stories of The Balvenie distillery.

The Creation of a Classic – No Age Statement – 43% ABV, celebrates the story of The Balvenie Malt Master David Stewart MBE – the longest serving malt master in the industry, who pioneered the first cask-finished whisky.

The Week of Peat – Aged 17 Years – 49.4% ABV, tells the tale of how Malt Master David Stewart MBE and former Distillery Manager Ian Millar used a week’s gap in the distillery’s production schedule to experiment with the addition of peat to the barley drying process.

The Second Red Rose – Aged 21 Years – is inspired by the story of Mary Douglas who lived in the nearby Balvenie Castle and paid rent to King James II in the form of a single, red rose each year.

Commenting on the release of The Balvenie Stories in Global Travel Retail, The Balvenie Malt Master David Stewart MBE says: “The Balvenie Distillery is built on stories. It’s what sets us apart and makes our whisky what it is. Each expression in the Stories range has a distinct narrative as to how it came to be, and each whisky tells its unique tale in liquid form through first-hand recollections of the many characters involved.”

The notion of storytelling informs the design of The Balvenie Stories Global Travel Retail packaging too, with each tale represented visually on the whisky’s tube and label in bespoke illustrations from British artist and printmaker Andy Lovell. Lovell’s work draws its inspiration directly from the distillery, where he spent time listening to the stories first-hand.

The three new whiskies in The Balvenie Stories collection will launch exclusively in Global Travel Retail in June 2020 at the following prices; The Creation of a Classic (£57), The Week of Peat (£115) and The Second Red Rose (£235).