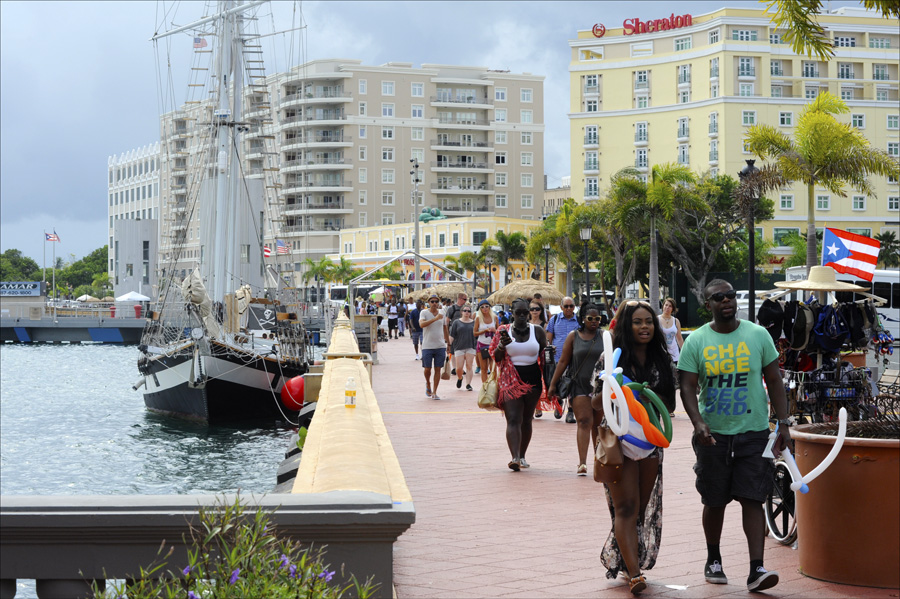 Some 1.7 million cruise passengers flocked to San Juan, Puerto Rico in 2015, and arrivals are expected to grow another 2% this year, despite the island’s fiscal crisis and Zika fears. Photo by Larry Luxner taken August 2016.

Story and photos by Larry Luxner

As politicians gear up for a gubernatorial election dominated by Puerto Rico’s fiscal crisis and Washington’s approval of a control board to supervise the island’s finances, tourism offers a rare glimmer of hope for the troubled commonwealth, even as it chafes under the weight of the island’s $68 billion budget deficit. 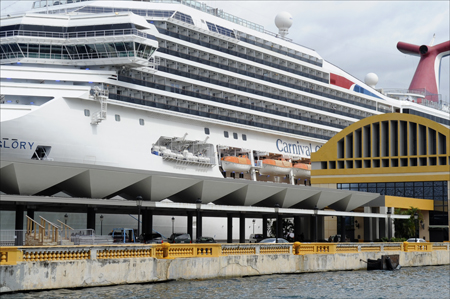 Most passengers cruising to San Juan pass through the ports duty free stores upon disembarkation.

In 2015, the island received just over 1.7 million cruise ship passengers, up from 1.47 million in 2014. Arrivals will grow another 2% in 2016, says Michele Paige, executive director of the Florida-Caribbean Cruise Association (FCCA), which is holding its annual conference and trade show Sept. 26-30 in San Juan. She expects about 1,200 people to attend that event.

“When the current governor [Alejandro García Padilla] came into office four years ago, the industry was suffering,” Paige told TMI. “The port was controlled by the unions, and it was very difficult to do business. That is not conducive to providing a service when transportation is a monopoly. And none of the previous governors were willing to take that on. This one did.”

Since then, she said, “everyone, including those who were part of the unions, is doing extremely well.” Per-capita passenger spending in San Juan now stands at $73.12, up from $70.49 in 2012, when the FCCA last conducted such a study. Per-capita spending by crew is also up over the same period, from $122 to $149.

“When we took this survey six years ago, it wasn’t as positive as it is today,” she said, noting that short excursions, food and beverages, jewelry and incidentals tend to dominate cruise-ship passenger spending while in port.

“Because passengers are having such a phenomenal experience, they go back to stay for a longer-based vacation,” Paige said, estimating that in 2014, the cruise industry itself spent $16 million in Puerto Rico on food, beverages and other ship supplies.

Zika fears
Out of 800 people who have registered for the FCCA’s upcoming convention in San Juan, only one has inquired about Zika — a mosquito-borne illness that has been linked to profound birth defects including microcephaly, an abnormally small head caused by the destruction of brain tissue. 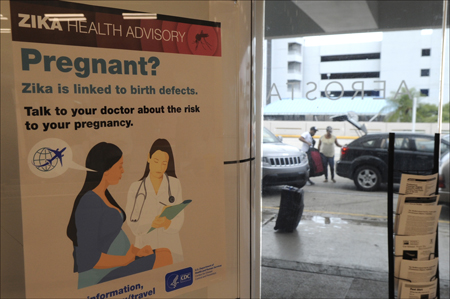 A wave of hotel cancellations followed the news that Puerto Rico mosquitoes were infected with the Zika virus. Sign here is posted at Aerostar’s airport office.

The virus has, however, led to hotel cancellations across the island, says Clarisa Jimenez, president and CEO of the Puerto Rico Hotel & Tourism Association (PRHTA).

“At the beginning, it was pretty bad because the numbers given by the CDC were alarming. They predicted that one-fourth of the population would be infected with Zika by the end of the year,” she said. “But that was the worst-case scenario. The reality is that as of today, there are only 14,000 cases, so that is less than half of 1% of the population.”

According to Jimenez, following an 11% increase in hotel occupancy in January, the industry saw drops of 3% in February, 5% in March, 4% in April and 6% in May.

In fact, a wave of hotel cancellations in the second quarter of this year has caused $44.5 million in losses for the island’s tourism industry. That’s according to Milton Segarra, president and CEO of Meet Puerto Rico, a nonprofit organization that markets the Caribbean island as a premier meeting and convention destination.

During the second three months of this year, 35 groups cancelled their events, leaving vacant about 50,000 room nights that had been reserved through 2016 and 2017.

“So far in total, 60,300 room nights have been lost. This is the impact Zika has had on us,” Segarra told the daily newspaper El Nuevo Día on Aug. 29, adding that his agency has moved aggressively to attract 57 new groups (equivalent to 28,000 room nights) to compensate for those losses.

Segarra, former chief of the government-run Puerto Rico Tourism Company, also criticized the CDC for scaring tourists. “Saying that by the end of this year 20% to 25% of Puerto Rico’s population would have Zika was not correct,” he told the paper. “They should have specified that this was in case nothing was done to address the situation.”

At any rate, the negative trend is ending thanks to discounting by hotels and the coming winter season, said Jimenez, whose PRHTA has 530 corporate members including hotels, airlines, transportation companies, restaurants and tour operators.

“The reality is that finally now, people are starting to be less worried about traveling here because there’s more information out there,” she told TMI. “If you use mosquito repellent right after putting on sunblock, there’s no need to worry unless you’re pregnant or planning to have a family. Even the CDC is advising to use repellent with DEET and wear loose clothing.”

Nevertheless, Puerto Rico ended fiscal 2015 with a 2.3% increase in overall hotel registrations, and a 3.4% increase among non-residents, according to PRHTA figures.

“We are the only economic sector that has been faring well,” said Jimenez. “Everybody knows we have a financial situation, but when you come to the island, it’s business as usual. New hotels are opening, and there’s lots of renovation going on. People might get this perception that Puerto Rico is falling apart, and it’s not.” 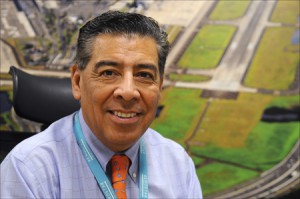 “Fortunately for us, because of these very special conditions Puerto Rico has endured recently — the financial crisis, the political crisis, Zika and also emigration to the U.S. mainland — we have seen an increasing number of people traveling and using the airport,” said Agustín Arellano, CEO of Aerostar Holdings. “You have more business people trying to get deals or finding ways to help improve our financial situation, officials of federal agencies traveling to Puerto Rico, and law firms looking for business.”

Arellano, interviewed at Aerostar’s offices at LMM, expects the airport to close 2016 with 9.0 million passengers, up from 7.2 million in 2013 — the year Aerostar took over LMM’s operations in a controversial privatization he says ultimately paid off for the government and for the people of Puerto Rico.

“We closed the deal paying the government $615 million in advance rent for the concession,” Arellano told TMI. “Then we brought in $230 million to do the remodeling and almost $50 million in additional working capital. That’s almost $900 million just in 2013 and subsequent years. So the exercise the government did by giving the concession to a professional operator like Aerostar is a very good investment, and could be an example for other pieces of Puerto Rico’s infrastructure that are right now in trouble.”

In addition, the privatization created 400 permanent and 2,500 temporary jobs on an island whose unemployment rate now stands at 11% — well over twice the 4.8% jobless rate in the 50 states.

Sadly, Puerto Rico’s continuing economic crisis has led more than half a million people to seek better lives on the U.S. mainland in the last decade, shrinking the island’s population from nearly four million in 2006 to just over 3.4 million today.

Yet this massive emigration “creates a new flow of local passengers” for LMM, said Arellano.

“People who emigrate to the States do it because they are looking for jobs or they already have a job there. And when they have a job, they travel more often to Puerto Rico, or they invite their family to visit them in the U.S.,” he said. “People may leave family and friends here, but they do have a tendency to come back more frequently.”

As a result, 80% of the 9 million passengers who used LMM last year are not tourists but Puerto Ricans traveling back and forth to visit family and friends, said Arellano, citing surveys done at the airport’s 11 convenience stores.

Aerostar will likely close 2016 with $112 million in revenues, about 30% of that coming from retail, though Arellano expects that to rise to 40% over the next five years.

“The public-private partnership has been a very good solution. Normally we see profits after Year 5, but for now we are making the numbers we had initially planned for,” he said. “The issue here is you cannot make more because you are capped at a certain level.”

For Arellano’s company, that level is $62 million regardless of actual traffic.

“Here it costs 25% less to operate an airline than elsewhere [in the United States],” he noted. “Even if we had 10,000 operations a day, we’d still receive the same amount as if we had only one.” 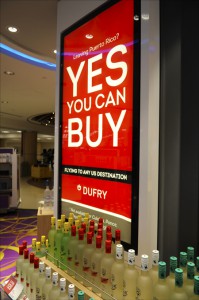 Dufry signage assure passengers traveling to the U.S. mainland that they can buy duty free at the airport.

As terminals have been renovated and retail services expanded at LMM, revenues have jumped from $2.30 per passenger when Aerostar took over the outdated airport to about $7.40 today. LMM now boasts 124 retail shops, and Dufry — the airport’s duty free operator — has a 28,000-sq-foot store that departing passengers must pass through after clearing security. Dufry also operates a nearly 9,000-sq-foot shop in Concourse A, which serves JetBlue and two small Caribbean regional airlines, LIAT and Tradewinds.
Liquor continues to be the top-selling item at LMM, he said. But it’s not just Bacardi and Don Q rum travelers are taking back to the States; champagne and whiskey are also big sellers. Passengers traveling to the U.S. mainland are exempted from federal taxes on duty free airport purchases — a fact Dufry trumpets via big red “Yes You Can Buy” signs prominently displayed throughout its huge walk-through shop at LMM.

Local handicrafts are also popular, thanks largely to El Market Puerto Rico, a large, colorful store featuring a variety of island products ranging from chocolates to ceramics. And soon, Management Group International, which holds LMM’s master food and beverage concession, will team up with Hacienda Lealtad to open a gourmet coffee shop featuring Puerto Rican coffee from the mountain town of Lares; other iconic brands including Alto Grande, Yauco Selecto are already available for purchase at the airport.

Since 2005, JetBlue’s share of total traffic at LMM has jumped from under 5% to about 38%, displacing American Airlines as the island’s dominant carrier; AA now has 22%, meaning six out of every 10 planes entering or leaving San Juan fly either the JetBlue or American logo. United, Southwest, Spirit and Delta split the remaining 40% of traffic to and from the U.S. mainland, though Arellano said Southwest is growing the fastest “because they have very good promotions, and because they don’t charge for changes or for the first two pieces of luggage.”

On Dec. 14, Allegiant Airlines will introduce direct service from between San Juan and Orlando Sanford International Airport. The four-times-a-week flights are being advertised at only $50 one-way; three days later, Allegiant will launch direct service between LMM and two more cities, Cincinnati and Pittsburgh.

In fact, because of recent emigration flows, the top three airport destinations for LMM are all in Florida: Miami, Fort Lauderdale and Orlando. And that’s not likely to change anytime soon, regardless of who wins Puerto Rico’s gubernatorial race this November. According to the latest polls, the pro-statehood New Progressive Party has a slight edge over the pro-commonwealth Popular Democratic Party, with only a tiny fraction of voters preferring independence.

The island’s next governor will have to figure out how to help Puerto Rico climb out of its massive debt hole while discouraging people from leaving and attracting new investment to the island; tourism could play a key role in that effort.

“Puerto Rico’s financial crisis is not going to be solved in two, three or four years. It’s going to take eight or 10 years,” according to Arellano. “This is what knowledgeable people are saying. So the back and forth will continue.”