International tourist arrivals grew 7% in 2017, the highest increase since 2010, according to the World Tourism Organization (UNWTO)’s latest Tourism Highlights.

Tourism is currently the world’s third-largest export sector, reaching US$1.6 trillion in 2017, says the report.

International tourist arrivals reached a new record total of 1,323 million in 2017, some 84 million more than the previous year, according to the UNWTO Tourism Highlights 2018 Edition.

The growth in 2017 was the highest since 2010, led by the regions of Europe and Africa, which received increases in arrivals of 8% and 9%, respectively.

International tourism receipts increased by 5% in 2017. In addition to the US$1.3 trillion in receipts earned by destinations, international tourism generated another US$240 billion from international passenger transport taken by non-residents. This raised total tourism exports to US$1.6 trillion, or US$4 billion a day, which corresponds to 7% of the world’s exports.

The strong 2017 results were driven by sustained travel demand across all world regions.

Strong outbound demand from virtually all source markets, including rebounds from major emerging economies Brazil and the Russian Federation, benefited both advanced and emerging destinations, reports the UNWTO.

China continues to lead global outbound travel, spending US$258 billion on international tourism in 2017. This is almost one-fifth of the world’s total tourism spending, which stood at US$1.3 trillion, some US$94 billion more than in 2016.

Among the top markets and destinations in the world in 2017 Spain rose to become the world’s second most-visited destination in terms of international arrivals after France.

Available data for early 2018 confirms that international tourism is maintaining strong growth, with arrivals up 6% YOY between January and April. 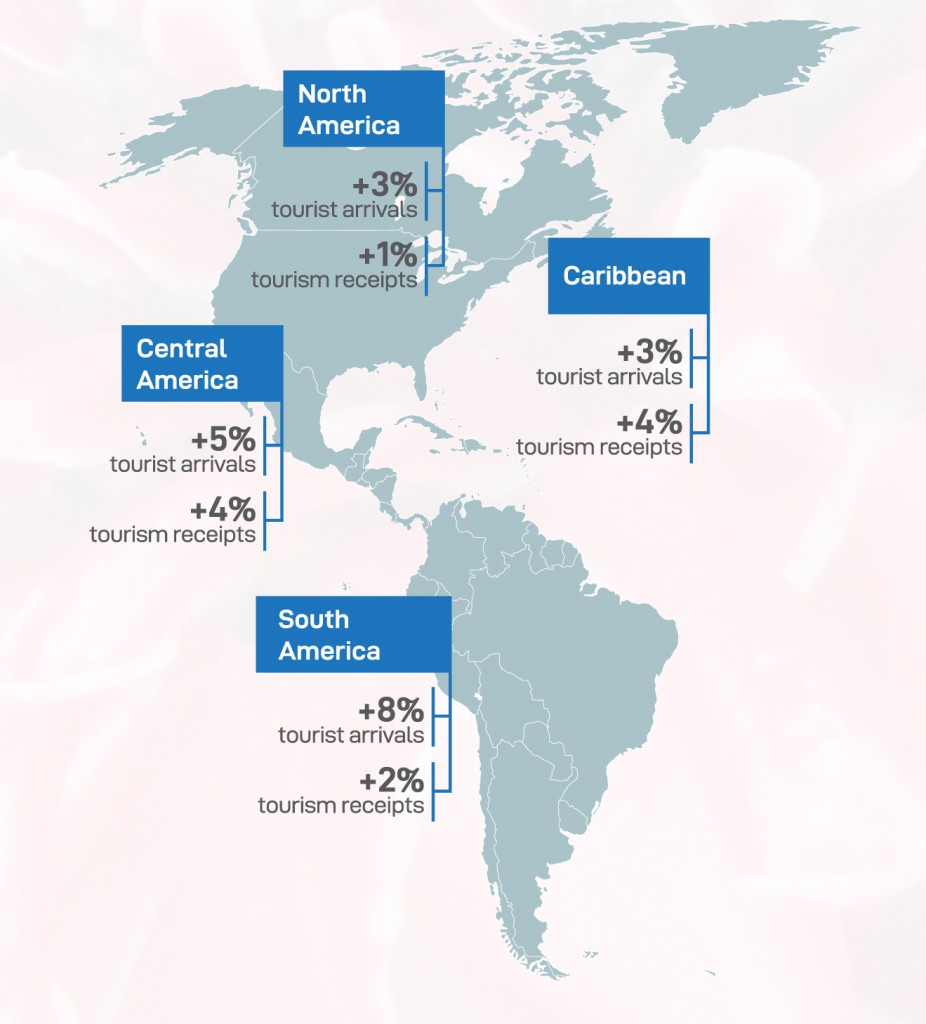 Positive results across most destinations

Arrivals to the Americas are estimated to have increased by 4% with receipts showing a slight slower growth.

In South America, the momentum continued in 2017. Robust outbound travel from Argentina and the rebound of Brazil fueled growth in neighboring destinations. Double-digit growth in arrivals was recorded in Chile, Colombia, Ecuador, Paraguay and Uruguay.

Central America recorded positive results in almost all destinations in terms of arrivals, led by Nicaragua, but also thanks to strong demand from regional markets.

In the Caribbean, results were rather mixed, with some destinations recording robust growth such as the Dominican Republic and Jamaica, and others declines due to the strong hurricanes that affected many islands from mid-August through September 2017.

North America, which accounts for two-thirds of the region’s international arrivals and receipts, recorded slower growth in 2017.