It is now two weeks since Hurricane Dorian devastated the northern Bahamas, on Sept. 1. The official death toll stands at 50, although officials expect this to rise substantially since 1,300 people are still listed as missing.

Preliminary reports estimated Dorian caused some $7 billion in damage, although it is likely too early to tell. Reportedly around 15,000 people are still in need of shelter or food, reports NPR, citing the Caribbean Disaster Emergency Management Agency.

Although the Bahamian government is doing its best to coordinate relief and rescue efforts, anecdotal reports credit private groups with rushing in and providing the most immediate and effective assistance.

As reported earlier, Miami-based wines and spirits distributor WEBB Banks has partnered with charity group Third Wave Volunteers, and a combined WEBB Banks and Third Wave team has been on the ground on Grand Bahama since Sept. 5.

An article in the Sept. 12 issue of Catholic News reported that a group of Third Wave Volunteers conducted a door-to-door, rapid-needs assessment, offered medical care, psycho-social support and coordinated the distribution of 80,000 pounds of supplies towards the Hurricane Dorian Bahamas relief.

Working in partnership with WEBB Banks, Third Wave’s team of 11 volunteers (with more waiting to rotate in) was split with volunteers taking helicopters with supplies and others transporting supplies on two boats. 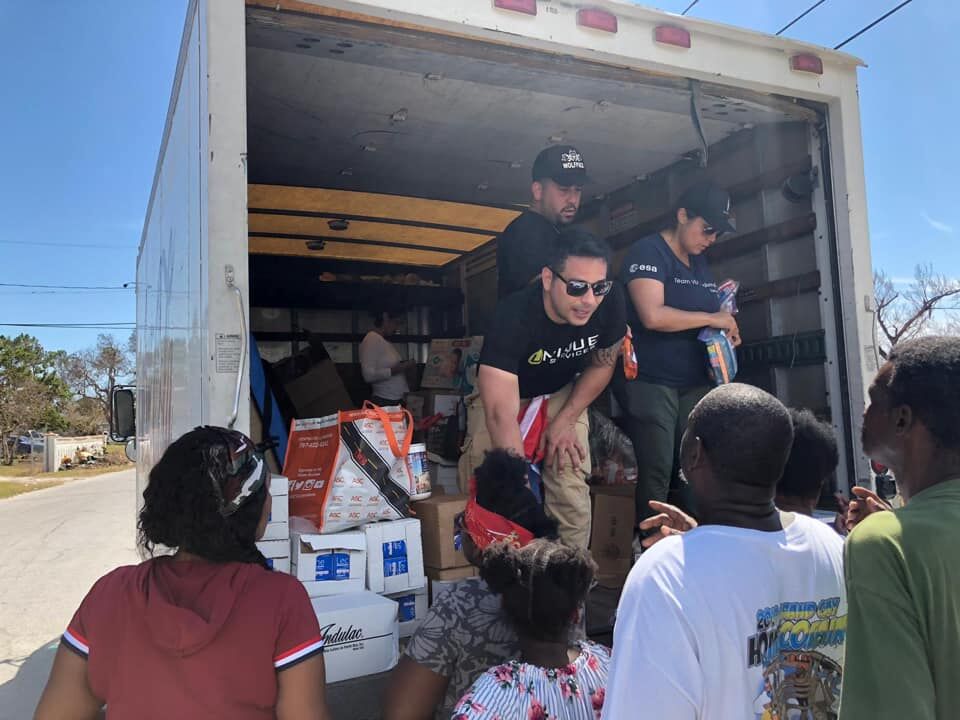 WEBB Banks sent out an update of its actions earlier this week to suppliers and donors. Last Sunday, WEBB Banks’ Drea Consuegra, wrote:

“Got to deliver tons of aid to parts of Freeport that weren’t the worst hit (though still in awful shape), and hadn’t been helped by anyone. We were the first people they had seen come through since the hurricane. Did so with supplies from Puerto Rico, a group called Unique Solutions, and with the help of a local partner, Bridge of Hope, using the Coca Cola van.”

Monday, Drea wrote: “We went to deliver aid… going around to houses in the pouring rain, giving out tents, lights and other supplies. We had a team with chainsaws clearing the way as we went.”

An update posted, today, Sept. 14, by Dr. Allison Thompson, founder of Third Wave Volunteers, reports that Third Wave Volunteers and WEBB Banks are on the ground moving fast to get quick aid to the people. Since WEBB Banks has a distribution network in place, the team was able to establish a warehouse in Freeport and are using Coca Cola trucks to deliver supplies and people. Third Wave Volunteers has set up a network throughout Freeport linked to a grassroots movement with local churches and 100’s of organizations.

Third Wave is also working with the local community and a group called Coral Vita to clear debris, trees, wires and heavy areas of road, in order to allow passage of vehicles to High Rock, Pelican Point and McLean’s Town, Grand Bahama.

The WEBB Banks crowdrise site shows that $86,000 has been collected within the past 12 days and this does not include the direct donations to Third Wave Volunteers or checks sent in directly says the company, adding that they are also steadily receiving fundraising events/efforts from its Caribbean distributors and friends.

If you wish to donate, please go to: https://www.crowdrise.com/o/en/campaign/hurricane-dorian-let-there-be-solar-lights