UK-based research firm Verdict Retail reports that the US will remain the largest duty free market in the Americas by 2020, driven by rising international footfall, especially from China, as well as the implementation of new laws that increases duty exemptions for US citizens up to US$800. The study also says that US government initiatives to boost tourism will bolster sales.

Verdict reports that the Americas duty free market will outpace pre-recession levels and grow faster during 2015–2020 at a CAGR of 5.1% to US$7.4 billion. Increase in number of international arrivals, expansion of duty free retail space, entry of established European duty free operators and upcoming major events will drive growth in the region, it says.

The US market was worth $3.9 billion in 2015 and will expand by $1.1 billion at a Compound Annual Growth Rate (CAGR) of 5% to reach $5 billion by 2020. The US is the largest market for duty free sales in the Americas and will record highest value growth on the back of ongoing modernization of airports, duty free retail space and high influx of Chinese travelers.

Maureen Hinton, Global Research Director at Verdict Retail, says: “Duty free retailing has been under-exploited by US airports until recently, but having seen the success of duty free retailing in other regions, US airports operators have realized the revenue benefits of having attractive retail facilities for travelers.

“Major airports such as La Guardia, Pittsburgh International, Dallas, Denver and Los Angeles are investing heavily in expanding and redeveloping their sites, including retail, while major duty free operators such as Dufry, Lagardère Travel Retail, and Gebr. Heinemann expand in the region.”

The second largest market, Brazil, is behind the US at $0.8 billion in 2015, but is also set to grow by a CAGR of 5% to reach US$1 billion by 2020. Verdict predicts that Brazil will benefit from a greater number of international travelers following the Rio 2016 Olympics, while high import taxes make duty free purchasing very attractive for Brazilian travelers as well.

Verdict Retail’s report also states that, of the nine major markets, Canada will grow fastest at a CAGR of 7.6% during the forecast period, reaching US$554 million by 2020.

“A weak Canadian dollar and government tourism campaigns will attract American visitors, driving duty free sales in the country. Spending will receive a boost from a new law that has extended the duty free allowance for US travelers, which stands first in terms of foreign visitor arrivals,” says Hinton. 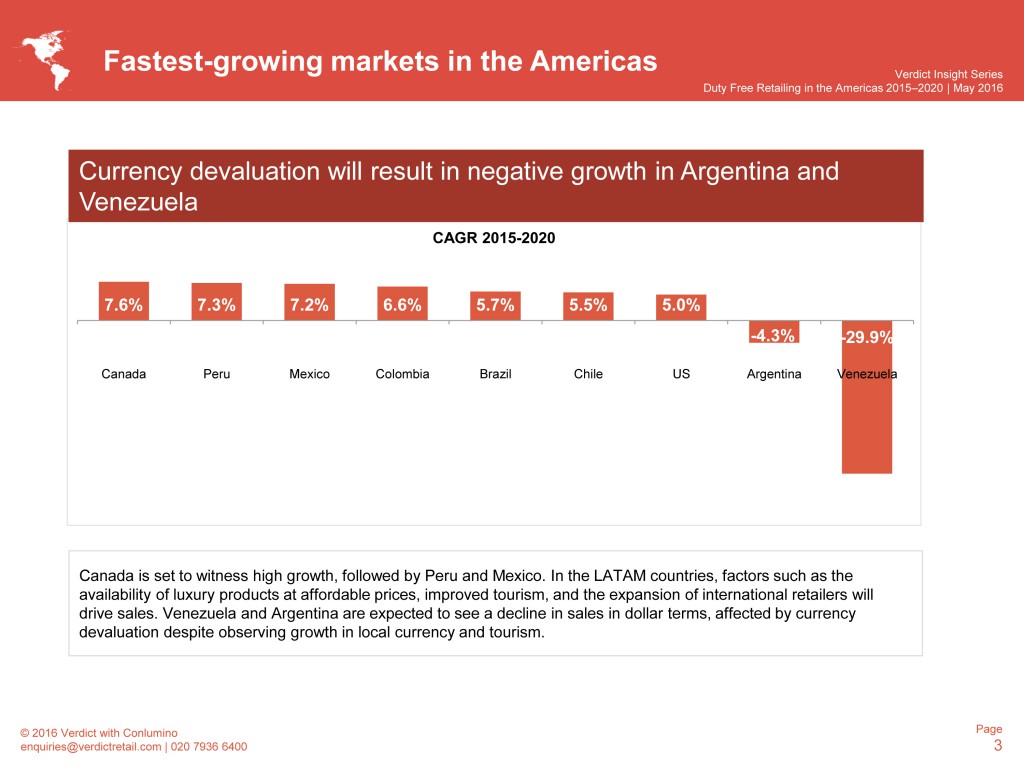