Created from the joining of North Carolina’s Banks Channel and Miami’s WEBB, the merger gave the combined company the scale, the leverage and breadth of portfolio that the partners did not have separately, says Consuegra.

The first year was a learning experience, he admits, as two cultures came together and two hurricanes devastated parts of the Caribbean.

“The first year of the merger it took a while for the cultures to comebine. But the hurricanes actually helped bring us together. It hurt our business; we had a terrible 2017 as a result of the hurricanes. But it created a stronger bond between us and helped create a stronger culture. It also helped us with all our partners both on the brand side and in the markets.”

WEBB Banks is the number one wines and spirits supplier in the Caribbean, but the company has even loftier goals, says Consuegra.

“We want to be the number one supplier of wine and spirits to all the customers we work with. We are now #1 for twelve customers and #2 for six more. That has been one of the drivers of the growth. Our long term goal is to double our sales in the next three years and to continue to extend our #1 position in the Caribbean.”

WEBB Banks’ strong relationships with its partners in the region is key to its success.

“We are in the Caribbean and that is where we are focused. We love our brands, we love the markets. Profit is air. You need profit to breath for a company, but we have to be more than that. We are all about making and enhancing connections. We value our relationships.”

Even with its strong relationships, WEBB Banks’ success depends on its brands, says Consuegra.

“We have a great balance of wines and spirits. We have hot brands. Tito’s is our number one brand and continues to grow in double digits. Our number two brand is 19 Crimes, which doubled last year. Our number three brand is Beringer, which has come out with Beringer Bros.,” he says.

“Then comes Macallan. We had a great year in the domestic markets with the new range as we are back to age statements with Double Cask and Triple Cask. Our number five brand Brugal was also up double digits.” 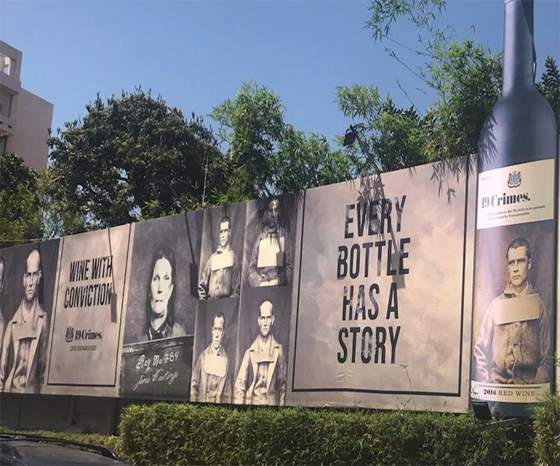 WEBB Banks has had great success with 19 Crimes and its Living Wine Labels, shown here in the Dominican Republic.

WEBB Banks has had particular success with the Living Wine Labels from Treasury Wine Estates. Using the augmented reality Living Wines app, consumers hover their mobile device over each bottle to bring a story to life. The augmented reality plays a short video clip that is triggered by the label on the wine bottle.

The experiences offered through the platform range from bringing characters from the brand to life on the label, promoting the historical features of some of the world’s oldest wineries, and educating wine lovers through the voice of a winemaker. The latest iteration extends beyond a single animated wine label to two labels that interact with each other.

The Living Wine Labels app has been downloaded more than one million times across the world.

19 Crimes wines has a great backstory. In 18th-century Britain, criminals guilty of at least one of the 19 crimes, were sentenced to live in Australia, rather than death. With the app, the stories of the Australian convicts on the labels are brought to life.

“We’ve done some really creative promotions for 19 Crimes in the Caribbean,” says Consuegra. “Treasury Wine Estates has really got behind the augmented reality on their wines. You download the Living Wines Labels app and can interact with the displays. They are available in English, Spanish, Mandarin.”

Macallan revamped and renamed some of its core whiskies last year and WEBB Banks is launching its newest offering at the Summit of the Americas.

“We’ve gone to all age statements,” says Phillip Jarrell, WEBB Banks Vice President Sales. “There are three editions of the 12 YO: the standard Sherry Cask for which Macallan has been best known for years. Now we have two flagships, Double Cask and Triple Cask, with slightly different flavor profiles. The Sherry Cask will appeal to the traditional Macallan consumer; the flavor profiles of Double Cask and Triple Cask will recruit a younger consumer.”