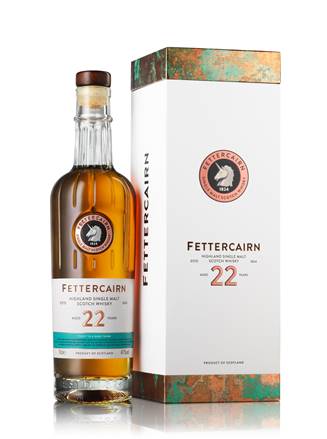 Whyte and Mackay has announced a new permanent addition to its core range of Highland single malt whiskies from Fettercairn Distillery.

Fettercairn 22 Years Old follows the recent release of its new 16 Years Old, and expands the core range from four to six whiskies, ranging from 12 to 50 Years Old.

Kirsteen Beeston, Head of International Malts at Whyte and Mackay, said, “In adding a further expression to the core range, we have significantly enhanced the flavor experience on offer at Fettercairn. We’ve also expanded consumer choice and demonstrated the exceptional quality of our aged stock at Fettercairn. Growing from four to six expressions reflects feedback we have received on the core range and the clear need to bridge the gap between the 12 and 28 Years Old. We are working hard to create a range of whiskies which honour the approach at Fettercairn, but also provide whisky drinkers with single malts showcasing the special character which sits at its heart.”

Bottled at a high strength of 47% ABV, Fettercairn 22 Years is available exclusively in the UK from The Whisky Shop until the end of July, then via global whisky specialists, at an RSP of £200.