Women in Travel Retail networking group has had an extremely eventful year end.

The annual WiTR meeting at the TFWA World Exhibition & Conference in Cannes in October attracted a record number of attendees and raised nearly €25,000 for Hand-in-Hand for Haiti, this year’s chosen charity.

The amount raised far surpassed the target of €15,000, and received a notable boost from an initial donation from Travel Retail Business from its Singapore event and an exceptionally generous donation from Miami-based Steffen Brandt (InnoTRI) – who donated his €2000 win from a competition on The Moodie Davitt Report.

The funds will help to purchase musical instruments, providing access to music lessons for pupils in one of the poorest communities.

WiTR sends a big thank you to all who contributed items for the raffle and the hugely successful silent auction, and for participating so generously.

Outstanding Contribution to the Industry

Also during TFWA Cannes, WiTR received the Frontier Award for Outstanding Contribution to the Industry.

“This was completely unexpected and a recognition of all of us as a force for good within the industry – for raising the profile of women, and for supporting others less fortunate than ourselves,” said the organization leadership in its latest newsletter.

Sarah Branquinho and Gerry Munday accepted the award on behalf of all WiTR members (see photo above). The Frontier statuette will be on display at WiTR’s meeting in Singapore in May, and in Cannes in October. 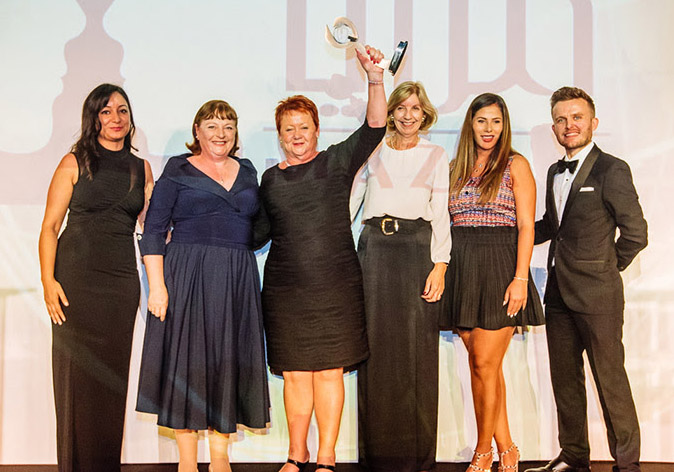 WiTR members have until December 14 to nominate a project. The nominated projects will be profiled in the Members’ section of the WiTR website from Dec. 19, and voting will be open until 23.59 CET (Central European Time) on January 14, 2019. Only fully paid WiTR members will be eligible to vote.

Nomination Criteria
Members of WiTR are invited to nominate a specific project (not a charity) which will directly benefit women and/or children and which matches these requirements:

Nominations must be received via email by 23.59 CET (Central European Time) on December 14, 2018 addressed to contactus@womenintr.com.