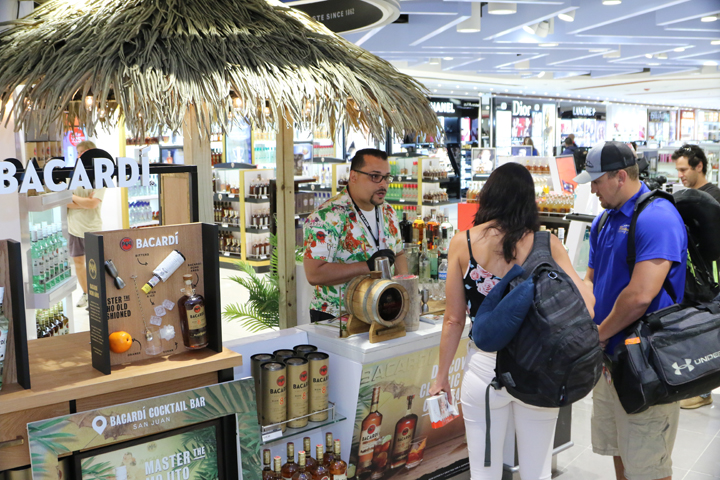 Featuring the full range of Bacardi aged rums, the activation is running from June 1 until September 30, 2017.

The bar celebrates BACARDI in its main country of production, and is designed as a great reminder of the Bacardi classic cocktails visitors will have come across during their stay on the island.

The activation encourages travelers to mix their own classic rum cocktails in a fun bar as retail brand ambassadors expertly advise and guide them across the range of rums. The goal is to show the visitors how easy it is to conjure up an authentic taste of holiday once they are back home.

Discover Classic Rum Cocktails With BACARDI will roll out to other locations globally this summer as part of a category-driving initiative to engage and excite shoppers with rum, grow understanding of its versatility in cocktail-making and also to create easy learning about its heritage and craft.

With its credentials as the world’s most awarded rum brand Bacardi is keen to drive a significant commercial opportunity for the rum category in Travel Retail, notes Geoff Biggs, Regional Director Americas, Bacardi Global Travel Retail: “Rum has all the age and craft credentials of whisky plus the massive driver of its appeal as a social, fun spirit at the heart of many of the world’s most popular cocktails.

“The extent of the Bacardi portfolio means we are the only rum brand with the credentials to cater across all shopper need states and to accelerate the overall category growth opportunity. Our Carta brands are highly accessible both in terms of taste profile and price point, with plenty of opportunity for rum-lovers to progress through the range. For more experienced aficionados, our super premium rums, including Bacardi Ocho Anos and Bacardi Reserva Limitada, offer sublime sipping-rum occasions.”

Throughout the campaign shoppers have the chance to enjoy classic cocktails, including Bacardi Carta Blanca in a Mojito or a Rum Collins, the Bacardi Carta Ora Cuba Libre or to savor a Bacardi Ocho Anos Old Fashioned.

Gustavo Barba, Commercial Director, Dufry adds: “Shoppers are loving the chance to enjoy one last classic rum cocktail before they leave the island, the obvious local link with BACARDI and its role as a key ingredient in classic holiday drinks.  The new bottle tags are also helping people choose the right rum for their kind of cocktail, as we’re seeing with the quantity of bottle being sold.”

The Bacardi distillery in Puerto Rico is the largest premium rum distillery in the world. Since 2004, Bacardi has operated the state-of-the-art Casa Bacardi Visitor Center.  It is the second most visited tourism venue in metro San Juan, drawing more than 200,000 visitors a year to learn about the history of the Bacardi family and brand, as well as its unique production.