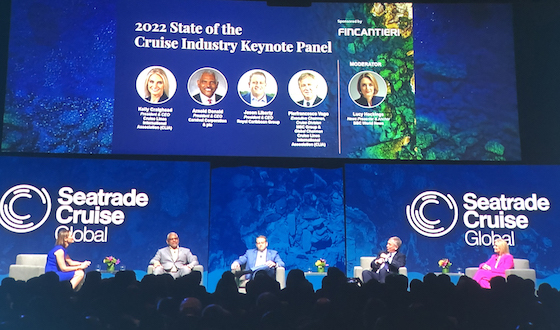 From left, the BBC’s Lucy Hockings moderates the State of the Cruise Industry keynote panel, with Carnival’s Arnold Donald, Royal Caribbean’s Jason Liberty, MSC’s Pierfrancesco Vago, and CLIA’s Kelly Craighead. The panel discussed the resiliency shown by the industry, and talked about how the pandemic united the industry, bringing it together to work on safety and health solutions, as well as how it strengthened many relationships with destination governments. Reiterating the cruise channel’s commitment to sustainability, the panelists also pointed out that cruising still represents the best vacation value available. 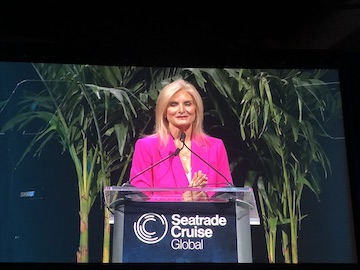 Citing CLIA research for her optimism, Craighead reported that: Intent to cruise is rebounding, with 63% of cruisers or potential cruisers indicating they are ‘very likely’ or ‘likely’ to cruise in the next two years.

69% of respondents that have never cruised said they are open to cruise, exceeding pre-pandemic levels.

Millennial cruisers are the most enthusiastic about taking another cruise, with 87% indicating they will take a cruise in the next few years, followed by Gen X at 85%.

Craighead also announced important environmental sustainability commitments from CLIA and its member lines that she said will drive innovation for a more efficient future.

The most important was a commitment by CLIA ocean-going members to pursue net-zero carbon cruising by 2050 (Ed. Note: currently, the commitment was to achieve net neutral emission.)

In addition, by 2035 all ships calling at ports where shoreside electricity (SSE) is available will be equipped to use SSE, allowing engines to be switched off and effectively eliminating carbon emissions while berthed at port.

Where shoreside electricity is not available, the ships will use available alternative low carbon technologies required by ports.

CLIA will also join the Global Maritime Forum Call to Action for Shipping Decarbonization to make zero emission vessels and fuels the default choice by 2030.

The industry is currently reducing the carbon footprint of its ships while at berth and at sea investing in advanced environmental technologies and partnering with cities and ports on sustainable destination management, she said.

Vago: The “Future is Bright” for cruising 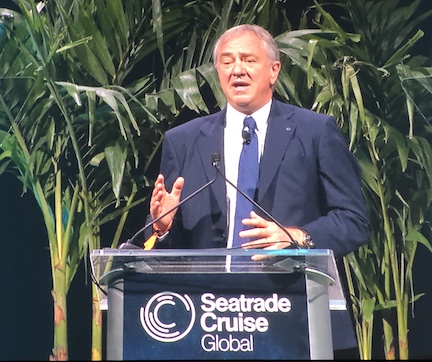 In his opening remarks, CLIA Chairman and MSC Cruises Executive Chairman Pierfrancesco Vago said the future is bright for the cruise industry, momentum is building for revival, and the industry is investing in the future.

Speaking before an audience of nearly 2,000 cruise executives, Vago said that the industry’s restart is accelerating, with 347 cruise ships set to sail in May, compared to 300 in April and just 47 last May.

Vago said that more than 100 countries around the world have now reopened to cruising and he expects the industry to be at 95% capacity by August, and in spite of the pandemic, 7.5 million people have sailed since MSC became the first cruise company to return to sailing in mid 2020.

“Our track record shows what we can do together as a determined, responsible and innovative industry,” he said, emphasizing the theme of working together.

He also stressed the value of cruising to the economies of the destinations– every 24 cruise guests generate one full-time job, for example, as well as all the peripheral employment from taxi service to food production and delivery.

The cruise industry’s science backed protocols facilitated the resumption of cruise operations, and led the hospitality sector’s response to the pandemic, he said.

Looking ahead to increase ship volumes, Vago said the industry needs to “realize the full potential of loyal repeat cruise customers, as well as developing new business among new-to-cruise markets.”