Dufry, the world’s largest travel retailer, last week revealed the impact of the COVID-19 pandemic on its first-half results, and it should come as no surprise how dire the impact was on earnings.

During the first six months of the year, Dufry’s performance was impacted by the unprecedented level of disruption of retail operations, globally driven by international travel restrictions implemented by governments worldwide and operational shut-downs of airports, cruise lines and other channels.

Turnover in the first six months of 2020 reached CHF 1,586.9m versus CHF 4,180.1m in the same period in 2019, representing a decrease of -62.0%. Organic growth was -60.6%, with like-for-like performance reaching -57.6% due to the lower passenger traffic across most airports globally and contributions from net new concessions amounting to -3.0%.

But the company immediately took steps to mitigate what damage it could, implementing a comprehensive action plan for cost savings and to strengthen its financial structure.

As a result, retail-related gross profit margin was only 60 base points lower compared to full-year 2019 despite the sales decline during the second quarter, reports the company.

Gross profit margin remained resilient supported by the collaboration between Dufry and its suppliers and is expected to normalize with business recovery. 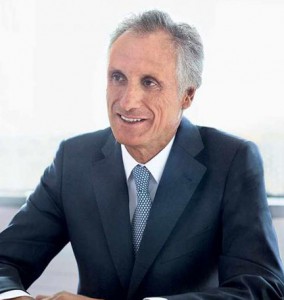 CEO Julián Díaz said: “This is certainly a difficult time for both the travel retail industry and our company. However, since mid-June we have started to see the first signs towards a recovery, with travel resuming gradually and more than 1,000 of our shops globally in operation again at the end of July.

“In the first half year, we have implemented a whole array of initiatives to adapt the company to the new market environment and safeguard its resilience going forward. These include measures to reduce costs at all levels, several activities to strengthen Dufry’s financial structure, as well as a restructuring of the company and the implementation of a new simplified organization as per September 1, 2020. I am confident that we have taken the right initiatives and that they will help us to emerge from the crisis with a solid position.”

Diaz continued: “During the recovery and going forward the increased agility and faster decision making processes will allow us to adapt swiftly to the new and changing market requirements, drive sales and accelerate growth. By taking out one organizational level, the teams covering our global functions and the countries will increase efficiency and get closer to the market and our customers.” 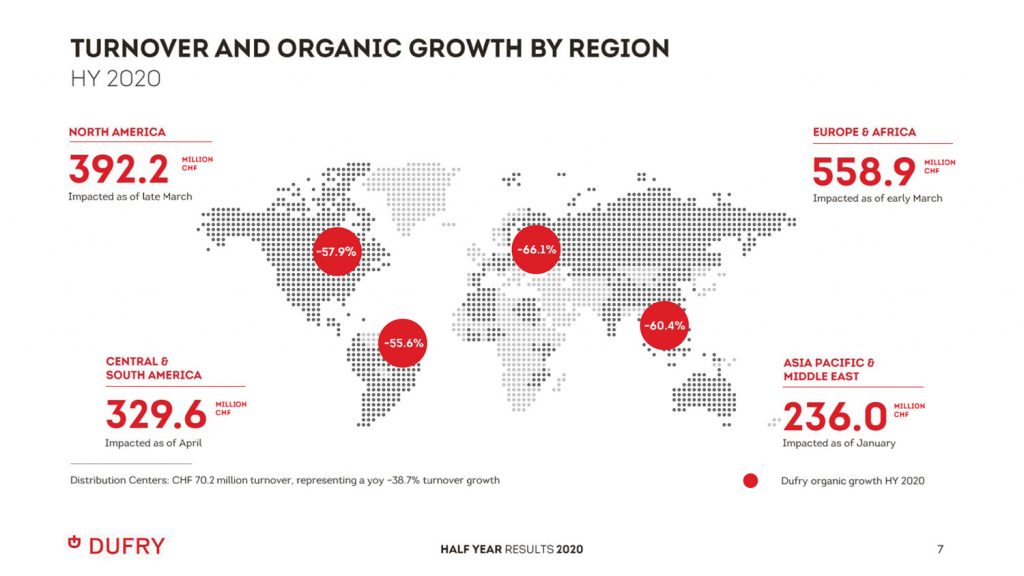 Turnover in the region was CHF 558.9 million in the first six months of 2020. Organic growth in the division reached -66.1% in the period. Performance was negative across most locations, and to a lesser degree in Africa. From mid-June 2020 onwards, travel restrictions were lifted or eased and intra-European travel, especially in Southern and Central Europe as well as the UK, started to resume.

Turnover amounted to CHF 236.0 million in the first half of 2020, versus CHF 623.8 million in the same period in 2019. Organic growth reached -60.4% with China and South Korea being impacted especially during Q1 2020, but resuming domestic and bilateral travel in Q2. Other parts of Asia-Pacific and especially in the Middle East region were impacted mainly in the second quarter, and are still continuing to be impacted with a low level of open shops.

Turnover reached CHF 392.2m compared to CHF 954.5m in the first half of 2019. Organic growth was -57.9% in the period with a slowdown in both sectors duty free and duty-paid, but especially in duty free, which is exposed to international flight schedules.

Domestic travel, which accounts for around 85% of the U.S. flight movements, started to resume, while the Canadian business was still impacted by international travel restrictions. The North American business started an initiative through its Hudson brand to rollout vending machines featuring health and safety products across 27 leading airports in North America.

Turnover was CHF 329.6 million in the first half of 2020 as compared to CHF 761.8 million one year earlier, with organic growth coming in at -55.6%. The division was the least impacted during the first semester, as most restrictions in the region only started in the second quarter.

The cruise business, mainly part of Central & South America Division, performed in line with the overall division, despite cancellation of cruise itineraries as staff were still based on ships and high season would only have started later in the year. Domestic travel, as well as border shopping and international flights within the region remained possible at limited levels, whereas most international travel outside the region was restricted.

By channels, 85.1% of net sales were generated at airports, a slight decline compared to HY 2019 (88.1%), whereas other channels have gained importance, especially railway stations, border, downtown and hotel shops. Product mix remained relatively stable with perfumes & cosmetics, food & confectionery and wine & spirits being the predominant categories.

The duty free vs. duty-paid split remained stable, with 60.2% and 39.8% of net sales respectively.