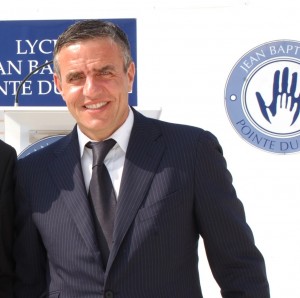 Olivier Bottrie, The Estée Lauder Companies’ President Travel Retail Worldwide and co-founder of the non-profit organisation, Hand in Hand for Haiti, was appointed to the French National Order of Merit.

Port-au-Prince, Haiti, February 10, 2015 – Today, Olivier Bottrie, The Estée Lauder Companies’ President, Travel Retail Worldwide and co-founder of the non-profit organization, Hand in Hand for Haiti, was appointed to the French National Order of Merit. French Minister of Foreign affairs Laurent Fabius nominated Olivier Bottrie for this distinction to recognize his philanthropic achievements after the earthquake that devastated Haiti in 2010. Olivier initiated and led the establishment of a non-profit free school, Lycée Jean-Baptiste Point du Sable, which opened its doors on October 3, 2011. Special political guests and members of the civil society gathered on today at a ceremony hosted by French Ambassador to Haiti, Patrick Nicoloso.

“The lycée Jean Baptiste Pointe du Sable is an extraordinary and successful project. Olivier Bottrie’s energy and commitment to it are exemplary. He fully deserves the recognition of France and this is why we are proud to reward him with the National order of merit medal,” stated Patrick Nicoloso, French Ambassador to Haiti.

“Today, we are more than happy to welcome and thank Olivier for his commitment to our homeland,” said Vanessa Matignon, Haiti Ambassador to France.

Following the catastrophic 2010 earthquake in Haiti, Olivier along with two other leaders in the Travel Retail industry created the humanitarian association Hand in Hand for Haiti. Eighteen months later, they opened a world-class, free kindergarten-through-secondary educational complex for local children. The Estée Lauder Companies has been a proud corporate sponsor of this initiative since the program’s inception in 2010.

As a French citizen, I am honored to receive this French national recognition which encourages us all to support the school’s vision. Education is the single most important determinant of an individual’s potential for growth. Our students represent the future of Haiti. I am thankful that Estée Lauder Companies has supported me from the onset,” said Olivier Bottrie.

Five years later, the Lycée currently welcomes 302 students and aims to provide education to over 700 students by 2023. An important part of the vision for the school is its holistic approach to education, inspired by the curriculum of the French Lycée of New York. It integrates academic excellence and sports, and provides social and health services for its students and staff. Classes are taught in French, English and Creole, with the goal to ensure students’ multi-lingual fluency. The Lycée curriculum emphasizes the need to protect the environment and to ensure that the economic development of Haiti is assessed through the lens of long-term sustainability.

Inaugurating the school and the sports complex last May, Haiti President Michel Martelly, said, “It is very important and that’s why I take the time to support what [Hand in Hand for Haiti] does… I value what’s been done here I even want to model it, to replicate it around the country.” 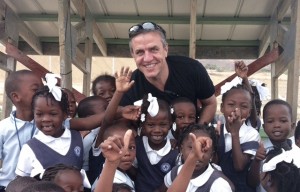