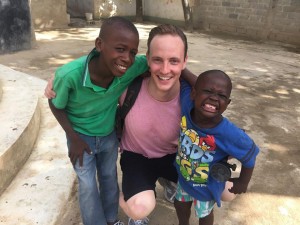 IGL’s Justin Guay with two of the children at the Streethearts charity in Cap Haitien, Haiti.

Canadian border operator Importations Guay Ltée, spearheaded by Vice President Justin Guay, has been approved by TFWA Care for a project in Cap Haitien, Haiti, that will impact the lives of 75 impoverished children in the devastated island country. TFWA member Brown-Forman is the project sponsor.

Guay’s TFWA Care program will provide a self-sufficient solar power system, their very first refrigerator, on-site hydroponic vegetable production, and 25% of the education costs for 75 children over a 2-year period.

The project is very important to Guay, who has been interacting with the children for the past three years and has seen firsthand the lives these “street kids” live.

“I run marathons with a group of runners called Marathon Expeditions led by John Bingham and Jenny Hadfield of Runner’s World fame. For the past 3 years we have partnered and visited with a charity in Cap Haitien called Streethearts Haiti. Linsey Jorgensen is an American who traveled to the small city to run with street youth to give them structure and provide them with a shelter and food. She currently takes care of 75 street kids,” says Guay.

What began as the group of about 150 runners donating used shoes to the shelter quickly turned into support for a new building and work apprenticeship pro-grams, says Guay. 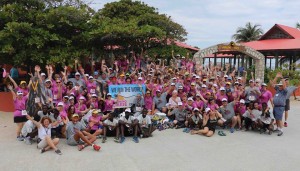 Marathon runners in Haiti with 9 shelter residents who also ran with new shoes in February 2014.

“I spent several days at the shelter in July 2015 and carefully examined how to further improve their situation. Although they had moved into a new building they still have many basic needs that are not being fulfilled,” he says.

“I contacted TFWA Care and Brown-Forman to help with this project. Today we are currently in the initial stages of shipping the solar equipment for them for installation.”

“Like many around the world, all of us at TFWA have been touched by Haiti’s plight since the catastrophic earthquake of 2010, and so we are delighted that Streethearts Haiti is one of the charities we are supporting through TFWA  this year. Helping children and young people in developing countries is one of the main aims of TFWA Care, and this project is a good fit with that ethos. Together with the project sponsor Brown-Forman, we look forward to seeing our support change the lives of young people in Cap Haitian for the better,” he tells TMI.

Guay will be on-site to manage the project as it unfolds.