Originally planned as a full conference to take place in Foz de Iguaçu, Brazil, the event was modified as a result of the travel restrictions and safety concerns resulting from the coronavirus pandemic. Nevertheless, the virtual event showed registration of more than 70 delegates including travel retail suppliers, store operators and the duty free press.

The event opened with a welcome from ASUTIL President Gustavo Fagundes, (COO of Dufry Latin America) and CEFSU President Andres Mendelsohn, (CEO of DFA Uruguay). They promised that the well-planned agenda would feature an important session on rules and regulations for exporting to the new duty free stores from Oscar Betancur of Via Balcão consultancy and a round table on labeling especially for the confectionary and food industry.

Frederico Antunes, Brazilian deputy for Rio Grande do Sul and one of the pioneers of the legislation which allowed duty free shops to open on the Brazilian side of the border, broke the welcome news of the new duty free allow-ance for border shoppers. Antunes advised that the Receita Federal (Brazilian Customs Authority) had authorized an increase in the duty free allowance from US$300 to US$500, which he expected the Ministry of Economy would sanction by mid-December. The new measure should take effect from January 1, 2021, he said.

Antunes also presented details of nine new stores due to open between now and February, which will bring the total number of operating stores to 21. The speakers expect that more stores will open as COVID-19 cases began to fall and Brazilians travel again from the big cities in the interior to the border. Antunes also noted that Brazilian airline AZUR was restarting regional flights from Porto Alegre to Uruguaiana, Sao Borja and Rivera/Santana do Livramento, improving connectivity for shoppers and suppliers. He also expected to see more investment in hotels, restaurants and other leisure activities as traffic flow to the borders improves.

Telmo Moraes Freitas of the Receita Federal confirmed the store numbers that Antunes announced. He also underlined the solid relationship his agency has with ASUTIL and CEFSU and discus-sed how all sides working together had been able to analyze and improve the Sepro system that links the border stores with the Customs Authorities. Moraes Freitas also reported that border sales were improving: sales reached a record of US$1.6m in October, the highest month since the first stores opened last year. Total sales for the year to date had reached US$8.9m, compiled from just over 270,000 transactions, he said. 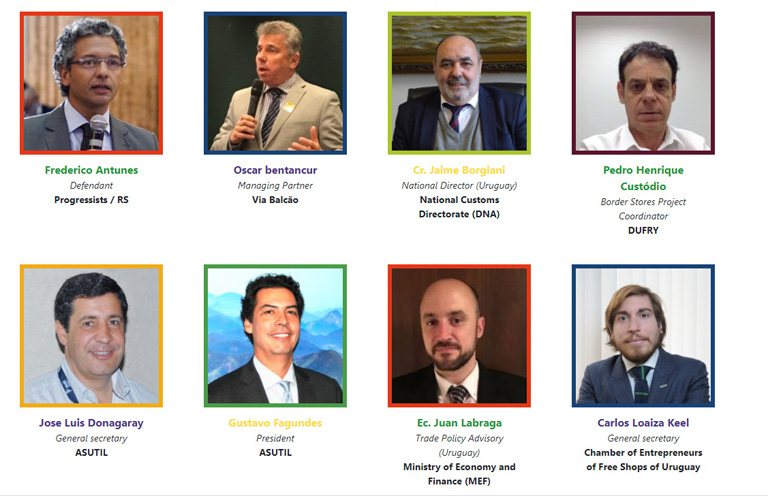 Taking a look at specific shops, Pedro Henrique Custódio of Dufry and Areff Sami Salman of New York Free Shop, who operate stores in Uruguaiana, introduced their stores to the delegates and described how they have adapted their product assortments since COVID-19: alcohol is now the top category, and electronics are gaining in importance. Perfumes and cosmetics sales have fallen, although they are expected to recover when people leave their homes again and resume a more normal social life.

In a short presentation, Jaime Borgiani, the Head of the Uruguayan Customs Authority, confirmed that Uruguayan border duty free shops have suffered striking sales drops since borders were closed as a result of the virus. After starting the year well in January and February, sales have fallen dramatically since March. He confirmed that the Uruguayan government is looking at ways to provide assistance to the free shops and was actively talking to ASUTIL and CEFSU.

Juan Labraga, a senior advisor at the Ministry of Economics and Finance, echoed Borgiani’s sentiments and added that the Ministry was looking at the best way to help stores without damaging the main-stream retail sector.

Carlos Loaiza, secretary general of CEFSU, said that his group continues to talk to the Uruguayan government to obtain additional benefits for the Uruguayan stores which have suffered the double whammy of increased competition from new stores on the Brazilian side of the border and an unstable economic situation in Brazil, further damaged by COVID-19. Although the talks have touched on the possibility of Uruguayan residents being able to purchase in the Uruguayan stores, other topics included increased social benefits for furloughed workers and allowing Uruguayans to use their annual overseas purchasing allowance of $600 in Uruguayan border duty free stores instead of e-commerce retailers in North America and Europe.

Loaiza also presented the latest Grant Thornton report on the importance of the border stores to the economies of the six Uruguayan cities where duty free sales are permitted. In many cases, duty free stores are the biggest employers in the towns and pay better salaries and benefits than other retailers. Although official figures have not been published for 2020, analysts expect sales will be at least 70% down on last year. Most shop owners hoped that border restrictions would be relaxed for the December – February high season but this will not happen. Some of the smaller Uruguayan duty free shops have closed while the rest await some government relaxation which is unlikely to happen in the short term.