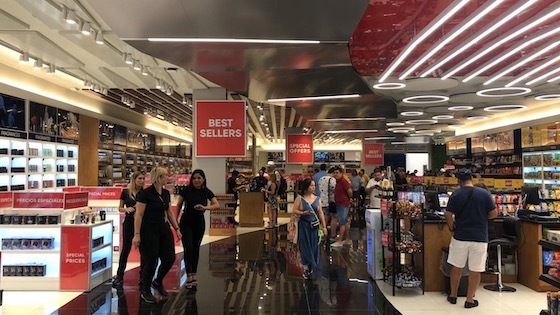 The Colon 2000 cruise port in Panama now has a new duty free operation in effect.

Regency Group, a privately owned multinational company with headquarters in Panama, which won the concession to develop some 4,500 square meters of premium travel retail space within the terminal in 2018, held a soft opening of its new Colon 2000 cruise port store on December 27.

“The store was fully operational with the most important brands in February and the results per ship were in line with internal targets,” said Walter Aguilar, VP of business development who has been working with Regency on the Colon 2000 project since its inception.

Aguilar tells TMI that the company was “making the most of what was left from the cruise ship season,” when the government of Panama gave an order to bar cruise passengers on March 13.

“In general we did not manage to have a full season with the store fully functional. But we are ready for the new season and very positive that the whole worldwide situation will turn around and the industry will be back and become even stronger,” he comments.

Regency Group is the exclusive duty free operator in both terminals 1 and 2, and will also be the anchor retailer in the new shopping mall galleria being built behind the cruise terminals, which is tax-free.

About 1,000 square meters of retail space will be a dedicated duty free cruise port store carrying all the major categories, along with luxury fashion products and watches and jewelry. A second shop in cruise terminal 2 will cover between 300- 400 square meters of space.

Regency’s tax free store, which will be in the main concourse of the Colon 2000 shopping gallery behind the duty free terminals, will be opened next.

Primarily a home port now, the developers have confirmed port calls for Colon 2000 from nearly all the major cruise operators, including Carnival, Royal Caribbean, Norwegian, Holland America and MSC, as well as luxury lines Celebrity, Seabourn, Azamara, and Crystal, among others.