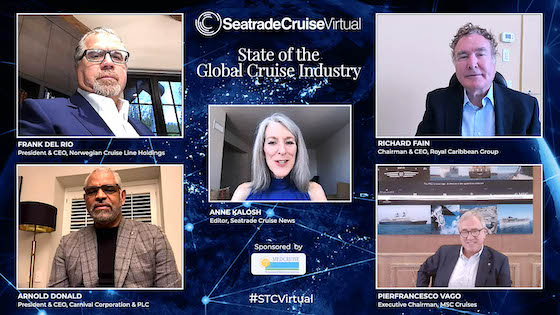 One of the biggest items of news that that came out of the 2020 SeaTrade Cruise Virtual Experience that began on Oct. 5, was the announcement by Cruise Lines International Association President and CEO Kelly Craighead that all of the organization’s members worldwide had agreed to 100% testing of passengers and crew for COVID-19 prior to embarkation. CLIA members account for 95% of global cruise capacity.

Speaking at her introduction of the annual State of the Industry conference on Oct. 6, Craighead said that the commitment applies to all ships with a capacity of at least 250 people and are subject to the U.S. no-sail order still in effect from the Centers for Disease Control and Prevention.

At the end of September CLIA had announced a set of far-reaching mandatory health protocols as part of a phased in, highly controlled resumption of cruise operations in the Americas. Craighead’s SeaTrade announcement expanded the protocols, which also called for mandatory mask-wearing by all passengers and crew aboard ship and during shore excursions, whenever physical distancing cannot be maintained; physical distancing in terminals, on board ships, on private islands and during excursions; and air management and ventilation strategies, among others.

“Testing is an important initial step in our multi-layered approach to assure the health and safety of passengers,” she said. CLIA is also continuing it focus on sustainability. Craighead noted that the industry is investing $23.5 billion in new ship technology and will be introducing 25 LNG-powered ships.

Last year the cruise industry’s global output was $150 billion contributing to local economies around the world, but the industry went to zero passengers and zero sailings almost overnight when the pandemic hit. While there are no simple answers, Craighead says that the resumption of limited sailings in Europe is giving cruise lines confidence for recovery.

She then enumerated five core strengths that the industry already encompasses that will direct recovery and restore confidence in the future: 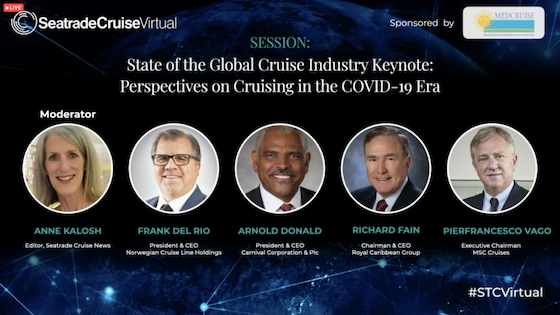 In addition to their commitment to universal testing, all four praised the success of the slow, gradual resumption of cruising in Europe, and stressed the science-based protocols emerging from the recommendations of the Healthy Sail Panel.

The Healthy Sail Panel, a joint partnership between Royal Caribbean and Norwegian Cruise Line, was a 65-page report including 74 detailed best practices that was put together by experts in medical practice and research, public health, infectious diseases, biosecurity, hospitality, and maritime operations, as a way to protect the public health and safety of guests, crew, and the communities.

The recommendations were submitted to the CDC to show the agency how the industry can safely resume cruising.

RCL’s Fain pointed out that the cruise industry is the only industry of any kind to stand behind 100% testing of all passengers and crew.

The cruise leaders also pointed out that a cruise ship is one of the few places where one can fully control the environment.

A ship can be a “safe cocoon” said MSC’s Vago, who warned that vaccines will not be “magic.”

Agreeing that despite all precautions it would still be possible for some passengers to fall ill, the cruise executives said it will be possible to isolate and care for anyone who’s sick.

They all revealed plans have been made with destinations to treat stricken passengers.

All four also emphasized that they are working together to return to service:

“there is no competition when it comes to health and safety,” said Fain, a policy echoed by all.

The executives also pointed out that cruise is the only industry that has to report illness on board, so that the perception of risk is somewhat distorted, especially after the high-profile outbreaks at the start of the pandemic. The confusing mix of messages and requirements from destinations at the beginning of the crisis was also hugely detrimental. Transparency and information will be critical to overcoming negative perceptions, they say.

“We took the time to study the science and have learned so much since then,” said Fain.

Keynote moderator Anne Kalosh, the respected editor of Seatrade Cruise News, tried to pin the panel down on when they expected to resume sailing, calling on them to rate on a scale of 1 to 5 whether it would be by the end of this year.

With the CDC’s no-sail order still in effect through the end of this month at least, Del Rio said that it would take at least 60 days to get a ship back into service, especially since they have not been sailing for the last six months.

While no one would commit to a number on Kalosh’s scale, all of the executives agreed they were optimistic that cruises would sail again by the end of the year. Strong bookings for next year were also encouraging for long-term recovery.

“We will not cruise until we are sure it is safe,” said Del Rio.

“We must be sure of the safety of our destinations, as well,” added Fain.

“We will be back stronger than ever,” added Vago.

Carnival’s Donald noted that the industry had been growing strongly before COVID and he is confident that growth will return.