Cruise Lines International Association (CLIA) has released the findings of the new, comprehensive 2016 Asia Cruise Trends study. The data reveals the cruise industry in Asia is growing at a record pace and shows no signs of slowing down. In fact, Asian source markets experienced the most growth year over year in ocean cruise passengers with an impressive 24% increase from 2014 to 2015 and a total of 2.08 million passengers in 2015.

“While we expected Asia to experience record-breaking growth in cruise travel, we are astonished at the rate at which the region is emerging as one of the most significant cruise destinations and cruise source markets in the world,” said Dr. Zinan Liu, Chair of CLIA North Asia.

“The cruise industry has been nimble and responded quickly to the demand for cruise travel in Asia by delivering cruise ships with amenities and experiences tailored to Asian travelers,” said Cindy D’Aoust, President and CEO, CLIA, adding that Asian cruise travel continues to deliver a growing number of enticing opportunities for international guests to visit Asia as well.

Among the highlights of the findings in the current State of the Asia Cruise Industry:

More Cruises Offered – There are 1,560 sailings on ocean cruises and voyages scheduled for 2016, up 43%  percent when compared to last year. There has also been a significant increase in the number of days cruise ships are in operation, from 4,307 operating days in 2013 to 7,918 in 2016.

Increase in Cruise Ships – This year, 60 ocean cruise ships will sail in Asia versus 43 ships in 2013, 15% more ships than the 52 operating in 2015. Of the ships sailing this year, 14 operate year-round while another 12 have extended deployment in Asia.
Capacity Boost – The capacity to carry passengers surged by 51% in 2016. As a result, the overall passenger capacity on ocean cruise ships will reach 3.2 million in 2016.
Demand for Destinations – Cruising in the region includes more than 204 destinations across 17 countries, making traveling by cruise ship one of the easiest ways to see multiple destinations throughout Asia. While the introduction of new ports throughout Asia is great for travelers, it is also great for local economies by bringing more visitors to Asian destinations.

Increase in Chinese Cruisers – From 2012 to 2015, the number of Chinese passengers grew at an annual compounded rate of 66%. Growth in 2015 alone was 40%. In 2015, 986,000 passengers were from mainland China, representing close to half of the Asian volume, compared to 703,000 in 2014. In both 2014 and 2015, China has been the world’s fastest growing major source market.
Under 40 Cruisers – In China, the average age of cruisers is below 43 with about 42% of cruise travelers below 40 years old. For the region, the same segment represents 38% of all cruisers.
Preference for Shorter Cruises – Asian passengers continue to prefer shorter ocean cruise lengths. In 2015, almost three out of ten (30%) Asian passengers continued to choose cruises two to three nights in length and half (50%) chose four to six night cruises. Almost a fifth of passengers chose extended cruises with 19% of Asian passengers opting for seven to 13 night cruises. As a result, the average length of cruises taken by Asian passengers has increased slightly from 5.2 nights in 2014 to 5.3 nights in 2015.
Asian Exploration – While Asian outbound tourism is exploding around the world, the study found that Asian cruisers are primarily exploring Asian destinations. More than 84% of Asian passengers cruised within Asia; 16% flew to cruise destinations outside the region, primarily in Europe (74%), followed by Alaska and the Caribbean. From Japan, 23% are traveling outside Asia, and 30% from India. Only 3.6% of Chinese travel outside of Asia.
Attracting the Asian Traveler – Cruise lines have recognized the need to bring their best ships and amenities to the region. New onboard offerings tailored to the Asian guests include inclusive onboard activities aimed at multi-generational families, high-end shopping, languages, adapted menus to include familiar favorites and regional cuisine, cabin amenities and high-tech features.

The report is available at http://cruising.org/AsiaCruiseTrends 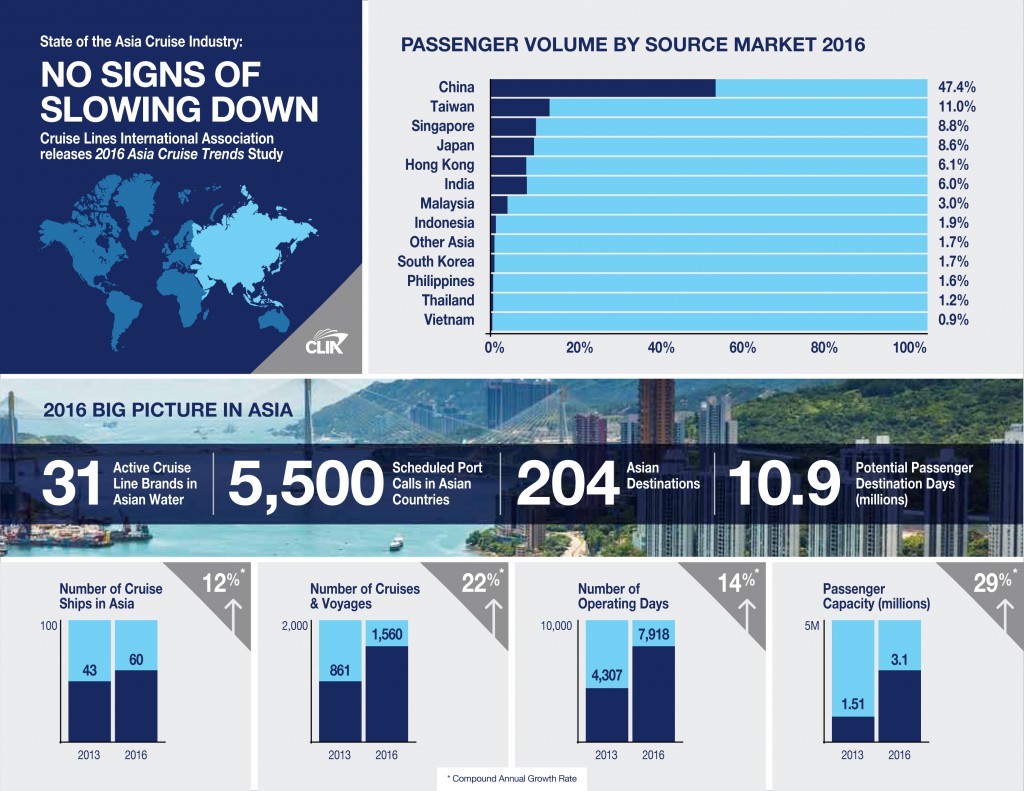