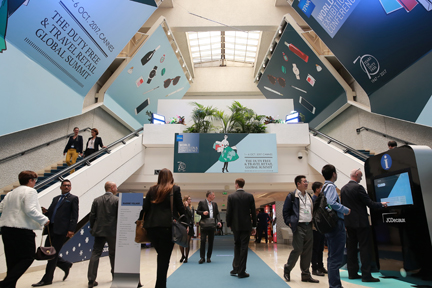 The sun was shining in Cannes the week of the TFWA World Exhibition, both literally and figuratively. One of the most optimistic atmosphere’s in years pervaded the entire show, with attendees reporting excellent meetings. 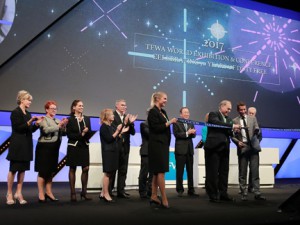 TFWA’s numbers back up the positive responses heard by TMI. Despite another schedule conflict that included China’s Golden Week, a holiday in South Korea and a Jewish holy day, attendance was strong, reports the Association.

Calling the 2017 World Exhibition & Conference an “unmitigated success,” TFWA reports visitor numbers increased 6% on last year, reaching 6,812. The number of companies attending rose by 2% to 3,031, and the number of visiting operators and landlords, a key category essential to the success of the event, was up 6% compared to 2016 at 2,262. Only the number of agents attending decreased, ending the week down 4% versus 2016. 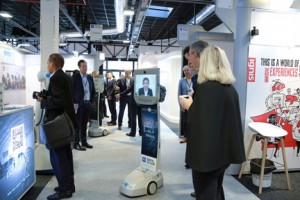 The Association tried a number of new approaches to keep the event fresh and relevant. The most ambitious and interesting was the “encouraging” debut of its Digital Village, which bowed with 33 exhibitors, and attracted 1,361 visitors (1,487 including exhibitors). The Digital exhibitors were heavy on virtual reality and other interactive state of the art technology, and could be a very interesting source of new ideas for the travel retail industry going forward.

The conference at the beginning of the week was attended by a record 1,643 participants. We will carry a recap of Erik Juul-Mortensen’s State of the Industry presented during the conference in the next issue of TMI.

The social activities began early on Sunday morning. In addition to the Charity run/walk, there was golf held in partnership with Estée Lauder, the very European sport of pentanque, the Paul & Shark regatta, and yoga on the pier hosted by Rituals. The Opening Cocktail on Sunday evening – held on the beach across from the Carlton Hotel – ended with the traditional fireworks courtesy of the City of Cannes.

The workshops were also fully subscribed.

The annual Women in Travel Retail meeting was another success, with the group raising more than €19,000 to build and equip classrooms for children at Sunrise’s Siem Reap home and learning center in Cambodia. Geraldine Cox, founder of Sunrise Siem Reap, spoke at the meeting, telling of the children who live at Sunrise, and the hundreds more living locally who come for lessons at the center.

Speaking from a completely personal point of view, here follows some of the highlights TMI experienced during a week filled with highlights.

The week unofficially began early with a private party held at Ma Nolan’s Irish Pub for a combined birthday celebration for Barry Geoghegan (Ireland) of Duty Free Global, Gerry Munday (England) of Furla and James Kfouri (Australia) of Wonderful Pistachios. It was the Big 165 and a wonderful way to pre-meet many colleagues in a very relaxed atmosphere.

A personal pinnacle for me, in a week filled with lovely events, was a visit to the Château de la Colle Noire, the former residence of Christian Dior located in Montauroux, a village near Grasse. The property was sold after the designer’s death, but was acquired by LVMH and the House of Dior when it came on the market in 2013. The renovation that followed is stunning— Dior archivists and architects recreated some of the authentic interiors – even tracking down original furniture – while other rooms were “reimagined” –inspired by friends and people that influenced Christian Dior. These include a Picasso room, another inspired by Marc Chagall, and one for Salvador Dali. Each of these artists were friends of the designer and visited La Colle.

In addition to the interior of the château, the renovation restored the magnificent gardens that defined La Colle while Dior lived there. A thousand May roses, vineyards, olive and almond trees were replanted in the gardens of the Château. In addition, the House of Dior has partnered with local growers in the area for another 30,000 of the rose bushes, ensuring these blooms exclusively for the Dior fragrances.

The opening of the renovated La Colle was held in May of 2016.

Back in Cannes, other stand out events in TMI’s week included the Furla party on Monday night, where guest were able to view the brand’s colorful, break-through collection unveiled earlier in Milan; Edrington’s launch on Tuesday of the new travel retail exclusive Quest Collection range for The Macallan, held at the Villa St. George in the center of the City; a very lovely dinner hosted by Distilleria Bottega in honor of the new collaborative partnership between the Italian distillery of award-winning Proseccos and wines and Lindt & Sprungli Duty Free in travel retail. Host Sandro Bottega stated that the guests at the dinner hailed from 22 different countries and proceeded to toast each of the countries, complete with a musical backdrop.

Bacardi also held a newsworthy tasting that included its relaunched Dewar’s 25 along with a few of its award-winning scotch whiskies, as well as new additions to its portfolio: Teeling Irish Whiskey, Compass Box Scotch, and Santa Teresa Rum. L’Oréal’s annual press presentation is always a highlight of the professional week (see the coverage on page X).

If you wish to get an early start on planning for next year, the 2018 TFWA World Exhibition will take place in Cannes from Sept. 30 – October 5.

All photos are courtesy of TFWA.