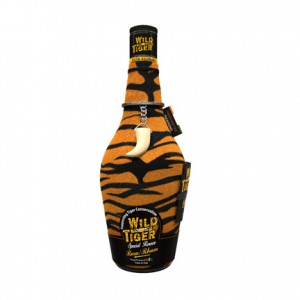 Wild Tiger – the first premium rum from India, which has already gained some impressive listings in travel retail since its launch a year and a half ago – has signed with Haleybrooke International to help build the Indian brand’s footprint in North American travel retail.

“It’s a special time for us to be working with Haleybrooke and to be in amidst some iconic brands of their portfolio,” says Gautom Menon, Wild Tiger founder and owner. “What Patrick and Roger bring to the table are invaluable, and we are tremendously happy to have put ourselves in a position to get noticed and signed by a pioneering brand agent such as Haleybrooke.” 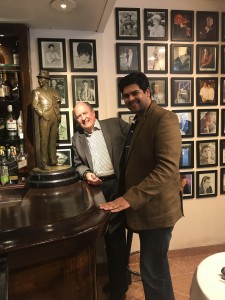 “What interested me in Wild Tiger Rum was not only the spectacular packaging and the great rum itself but the person behind the brand. In only a year and a half Gautom has managed, almost singlehandedly, to put Wild Tiger Rum on the Travel Retail Map faster than many of the largest companies in the industry,” says Patrick Nilson, President of Haleybrooke International.

Since its launch in travel retail less than 18 months ago, Wild Tiger was launched with ARI operated Barbados runway duty free, Auckland with Loop duty free and Muscat Duty Free, as well as has Dubai Duty Free, DFS and King Power Thailand in the pipeline. 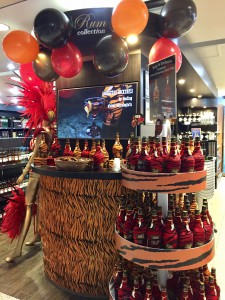 Gautom Menon has launched his Wild Tiger rum in key travel retail venues over the past 18 months, including with ARI in its Runway Duty Free shop in Barbados airport.

“It’s truly satisfying to know that we are listed and working with the Pioneers of Duty Free, Aer Rianta International who operate at some key airports across the world giving our brand an incredible amount of visibility,” says Menon. “What is most heartening is to know that our brand produced in a tiny village in remote Southern India is now Roaring in Barbados, which is the very Mecca of Rum.”

After attending the ASUTIL conference in South America to introduce his brand in the LATAM region, Menon says shipments are en route to Neutral Duty Free in Uruguay and JPT in Chile.

Both Menon and Wild Tiger Rum will be attending the FDFA Convention in Montreal in November with Haleybrooke, which has hopes for the brand in the country and region.
“I look forward to introducing both Wild Tiger Rum and Gautom to the Canadian Travel Retail key accounts at the FDFA in Montreal and have already guaranteed the success of the brand in Canada duty free,” says Roger Thompson, Vice President of Haleybrooke International.

Wild Tiger, which is produced in Kerala state of Southern India, – has unique packaging designed to stand out on shelf. Just as no two Tigers share similar stripes, no two bottle designs are alike making it a souvenir and gifting option  in Travel Retail, says the company. As a part of its core CSR policy, the brand donates 10% profits towards Tiger Conservation in South India via their non-profit Wild Tiger Foundation (W.T.F).

Wild Tiger is founded and owned by Drinks entrepreneur Gautom Menon who was recently recognized by GQ Magazine as India’s 50 most influential Young Indian’s. Wild Tiger plans to soon set up a dedicated Travel Retail  team to be based in London to grow the brand and Rum’s voice share in Travel Retail.