Aéroports de Montréal (ADM) inaugurated $350 million worth of expansions and improvements at Montréal Pierre–Elliott Trudeau International Airport on May 10, with a big focus on a Montreal Sense of Place. The wing opened for business Thursday, May 12 with Air Transat flights to and from Paris’s Charles de Gaulle Airport.

A new commercial space was added between the existing Gates 52 and 53 with distinctive architecture and an open-plan layout. The retail space will be further expanded to 14,585 sq. feet by the end of 2016, a 38% increase compared to the area five years ago.

Aer Rianta International, HMSHost, SSP and Paradies Lagardère operate the retail and Food & Beverage, many of which offer food and brands with a typical Montreal flavor, says the airport.

These investments were financed entirely by ADM, without any public funding.

“The project is part of a master plan to create a facility that is both functional and vibrant, as well as emblematic of Montréal,” says James Cherry, President and Chief Executive Officer of ADM. “It has been completed showing imagination and taking into account our limited financial resources.” 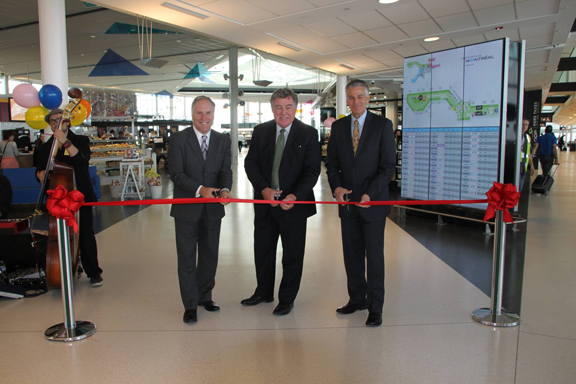 The main innovation is the development of an interior open-plan area designed to create a unique atmosphere through the integration of artistic and cultural elements, including a lighted ceiling installation titled Nuée de verre (Veil of Glass) composed of different colored glass triangles illuminated by spotlights. There are also large murals created by local artists, showcases dedicated to Montréal’s main museums, and a fanciful children’s play space.

“Although representing a small percentage of the budget, it is these little extras, in conjunction with the open-plan, transparent architectural design, that make all the difference,” Mr. Cherry says.

The expansion of the terminal’s international jetty, the most significant project in terms of budget, was completed four months ahead of the original schedule.

The international jetty expansion project also stands out in terms of sustainable development, since it incorporates many elements that should lead to a first LEED certification for Montréal–Trudeau.

The construction featured the use of building information modeling (BIM) technology and a construction-management approach, which helped to minimize do-overs and extras, ensuring that the project was completed on time and within budget.

In 2015, 15.5 million travelers passed through the airport, up 4.5% from the previous year. Around 40% of the passenger traffic is international.