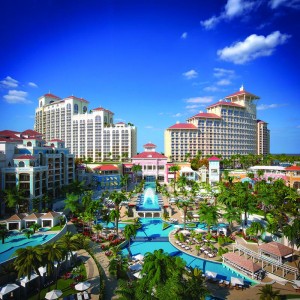 Baha Mar Ltd., the development company behind the $3.5 billion resort complex in the Bahamas, filed for bankruptcy protection on June 29, with CEO Sarkis Izmirlian blaming China State Construction for delaying the project due to missed construction timelines. The developer also filed a lawsuit in London against China State Construction Engineering Corporation Limited, accusing it of breach- contract obligations. The lawsuit seeks up to US $192 million in damages for Baha Mar’s developers, according to media reports.

The massive resort project – billed as the largest single-phase luxury resort project in the history of the Caribbean—received tremendous fan-fare before its scheduled March 27th opening – including on the cover of TMI’s 2015 Caribbean Duty Free Review.

Just days before the March deadline Baha Mar announced on its Facebook page that it wouldn’t be opening as scheduled, and has not yet announced when the opening might take place, except to say “as soon as practicable.”

After Baha Mar announced it was filing for bankruptcy protection, China State Construction fired back at the project’s developer, accusing it of “financial and design mismanagement.”

Last week, Baha Mar Ltd. received a 13-day court adjournment until July 20 from the Bahamas government to allow time for negotiations with both its lender and general contractor in an effort to finish the $3.5 million project.

“We at Baha Mar want this, have an urgency to reach an appropriate resolution, and look forward to participating in discussions this week in China,” said the developer in a statement on July 13.

The 1,000-acre resort, which plans to include a casino, 18-hotel golf course, multiple pools and four new hotels, was built with the help of 4,100 Chinese laborers and $2.4 billion in financing from the Export-Import Bank of China. China State Construction Engineering Corp, the lead contractor on the project, also had taken a $150 million equity stake.