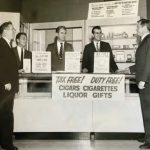 Duty Free Dynamics has scored another distribution coup, and has now added Swiss luxury brand Bally to its portfolio. With Bally, Duty Free Dynamics expands its luxury lineup with the new product category of Leather Goods & Accessories. DFD is introducing Bally’s full line of products, which it will distribute throughout the travel retail channel […]

The Gamma3 Council, an association of brands and retailers in the high-end segment in the Americas, has been holding a series of virtual webinars organized by Diego Stecchi, managing partner of Luxury Retail Partner, who founded the group in 2007. A recent Gamma3 Council session examined the impact of COVID-19 on the Caribbean as it […]

Abdul Waked, the head of leading Latin American duty free operator Grupo Wisa, has always loved luxury goods. Hailed as a visionary, Waked’s original La Riviera stores in the 1990’s transformed the way fragrances and cosmetics were sold in much of Central America and introduced the concept of perfumeries in Panama. In La Riviera, top-name […]